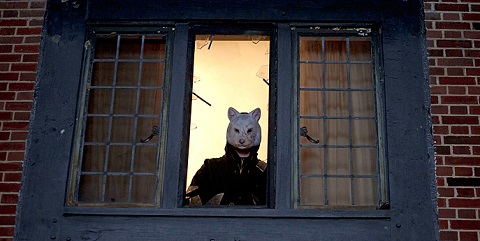 Vacation time is winding down, and it’s starting to be time to head home, far away from any questionable adventures.  But don’t worry, you won’t be safe at home either!  We’ve got ten flicks on streaming that prove that home is where the hell is — you may want to watch these on the road.

A Bed & Breakfast run by a kind older woman and her son is the source of increasing strangeness in D.W. Young’s blend of comedy and suspense, and you can read No-Budget Nightmares’ take on the film here!

Horror novelist Roger Cobb (William Katt) moves into his aunt’s house after her death and the disappearance of his son, only to discover that his earlier memories are taking physical shape there!  Steve Miner directed the horror/comedy written by Fred Dekker, featuring George Wendt, Richard Moll and Kay Lenz.

The plot isn’t particularly noteworthy — a couple move into a new home and slowly discover that their neighbor is a psycho — but when the neighbor in question is played by Rod Steiger, you know there will be no scenery left unchewed.  With Linda Kozlowski in a rare non-CROCODILE DUNDEE role.

When Marty brings his finacee Lesley home to meet the family, Lesley soon finds out this his kin is a hell of a lot stranger than the man she fell for in Mark Waters’ adaptation of Wendy MacLeod’s play.  With Parker Posey, Josh Hamilton, Freddie Prinze Jr., Genevieve Bujold and Tori Spelling.

David Fincher’s direction, David Koepp’s script and strong performances bring this home invasion flick, about a mother and daughter who lock themselves in the titular abode when their home is burgled, above the standard stuff.  With Jared Leto, Forest Whitaker, Dwight Yoakam, Ann Magnuson, Ian Buchanan and a surprisingly tolerable Kristen Stewart.

Jim Mickle’s remake of the Mexican film of the same name (sadly not yet available in the U.S.) tells the tale of a family who has existed on human flesh that luses their patriarch and must find a new source of nourishment. Recommended!

Tim Roth’s directorial debut is a harrowing family drama that gets really dark, really quickly as a 15-year-old boy discovers the relationship between his father and sister is much more than familial.  With Ray Winstone and Tilda Swinton.

It took three years before Adam Wingard’s home invasion pic hit theaters, and while it may not have lived up to the prolonged reputation, it’s certainly a solid tale of a family attacked by animal-masked figures.  With some interesting twists and a great “final girl” in the form of Sharni Vinson’s resourceful heroine.

Michael Haneke’s (vacation) home invasion thriller about a family of three taken hostage by a duo of young psychos is essentially designed to frustrate viewers. Have the family settle in, click “play” and enjoy the last moments you’ll have in anyone’s will.

Paul Kersey’s home is far from safe when a gang of thugs (including Jeff Goldblum) break into his apartment and attack his wife and daughter.  Kersey soon finds a taste for revenge, sparking a Charles Bronson rampage that lasted another four films after this.  Michael Winner’s film may not be the best vigilante flick ever made, but it’s damn sure one of the most influential.