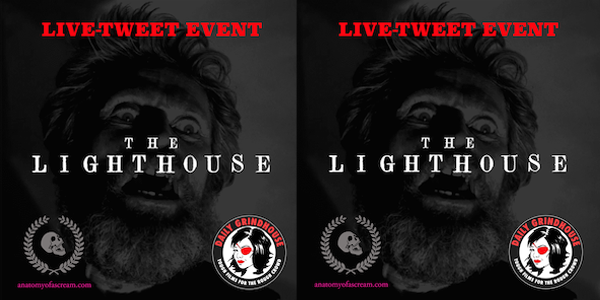 Here’s today’s daily reminder that Daily Grindhouse is teaming up with Anatomy Of A Scream to host a Live-Tweet event this Friday, April 17, 2020. We’ll be live-tweeting along with Robert Eggers‘ film of existential dread (complete with farts and dancing), 2019’s THE LIGHTHOUSE.

So be sure to pour yourself some liquid libations of whatever housemade hooch you’ve fashioned in isolation, and ponder the love one man can have for another’s lobster, and live-tweet with us as we watch the strange goings-on in THE LIGHTHOUSE.

Each day this week we’ll show off a new video promoting the event, and here’s the first one. Enjoy and hope to chat with you all on Friday, April 17, 2020 at 9pm Eastern for our first Live-Tweeting alongside Anatomy Of A Scream.