DON’T BREATHE  is tense and features sharp cinematography and the plot, moves steadily on a razor’s edge, escalates into an electrifying home invasion feature, one that surges with life even as some of its characters, well, don’t. (Spoiler! People die.) DON’T BREATHE is not without it’s flaws, and as far as home invasion thrillers go, this writer finds YOU’RE NEXT much more electrifying, despite a first reel that is kind of a slog, it definitely delivers. 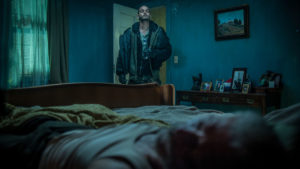 The audience is introduced to three characters: The Troubled Female from the broken home, a girl with that ‘Do Not F**K With Me’ sign branded above her sunken eyes, but with a sympathetic, family-oriented goal down beneath; The Younger Male of the group, a guy with a mostly solid head on his shoulders, but also one that doesn’t get used very often because of his friend-zoned status with Troubled Female, with whom he is smitten; and The Older Male, a dude who is as stereotypically thuggish as he is in the way of Younger Male’s romantic desires.

Younger Male, played by GOOSEBUMPS’s try-hard charmer Dylan Minnette, has a father whose company has keys to many homes in the Detroit area, which for some reason are kept in a very easily accessible place within his home. Younger Male grabs said keys and goes on quick-and-clean robberies with the other two characters, just nothing stolen over $10,000. You know, the honorable thing to do. 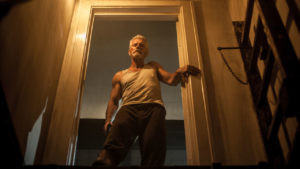 Enter Blind Man, a.k.a. Stephen “Yes, You Know Him From AVATAR (or MANHUNTER around DG– Ed.)” Lang. Lang portrays a blinded Gulf War vet who is apparently sitting on a metric crap-ton of dough after winning a settlement over a car crash involving a member of his family post-war. He has a dog, and he lives alone in a completely unpopulated part of town. We’re talking zero other lifeforms. (Again, besides his snarling, monstrously obedient would-be Cujo.) The three characters hatch a plan to steal from him at night, and Troubled Girl will use the money on her sister when they all can get out of Detroit and head to the glowing sanctuary that is apparently California.

That’s essentially all you’ll need to going in. Now, despite this writer’s splices of sarcasm throughout this review, that’s the main idea of the film as it builds up, and again it truly was an enjoyable watch. Stephen Lang’s Blind Man may not put Daredevil to shame with how he utilizes his other heightened senses, but he’s a brutish character and man, does he brute it up well. The rest of the cast—not to leave them high and dry—also land well throughout the film, albeit some dryer moments where some of the character depth is a bit wishy-washy. (Not wholly empty, don’t worry.) DON’T BREATHE becomes an inventive thriller that keeps audiences’ nerve endings on the fritz, especially when the twists towards the end hit harder, shaking not only Blind Man’s ramshackle home but also the chances of survival for the invaders remaining.

DON’T BREATHE is a very well made thriller, and as long as you’re ready for those aforementioned gross twists (Spoiler! Your turkey-basted Thanksgiving dinners may never be the same.) Fede Alvarez’s DON’T BREATHE (Produced by Sam Raimi, among others.) chugs along strong and should be a hit in the weeks to come as it continues to bump flicks like SUICIDE SQUAD off the box office charts.

While some critics have not been kind to Don’t Breathe, (More Like Don’t Spend Your Money has been the overall gist of these scathing reviews. )“It’s not worth it,” they’ve reiterated. “The hype didn’t last.” “Stephen Lang is the only minimally saving grace.“Don’t go.”That’s what has been said. Ingnore all that. Stephen Lang may not welcome you into his home, but you’re going in anyway. Have fun!