Pat O’Sullivan appears courtesy of the DRINKS ON MONDAY Podcast.

Kevin Smith is one of the most polarizing filmmakers today. You’d think a man that built his career preaching the gospel of STAR WARS and Marvel comics on celluloid some 20 odd years ago would be king apparent in today’s box office landscape, however nothing could be further from the case. Smith fans are almost as legion as his detractors. So vast is Smith’s TV/podcasting/comic book/merchandise empire that filmmaking has become almost secondary to him lately. What’s even more interesting is that his past few project stray away from the pop culture stoner comedy he initially made his mark with, finding him setting his sights more on the horror genre (RED STATE, TUSK, and a segment for HOLIDAYS).

Smith’s latest effort, YOGA HOSERS proves to challenge his fan base once again.

To many this may feel like a step back after any indie horror cred Smith may have accumulated with RED STATE and TUSK. While YOGA HOSERS very much exists in the same shared universe as TUSK and acts as the second part of this “True North Trilogy” the two films are very different in both execution and intended audience. YOGA HOSERS is a PG-13 rated comedy aimed towards teenage girls, a demographic Smith purposely wanted to court after witnessing first-hand the severe lack of wacky/sci-fi comedies being geared towards his teenage daughter.

As well intended as that may be, it never quite feels like a home run. People walking in to see the follow up to TUSK will be disappointed. Longtime fans expecting something akin to MALLRATS will be disappointed. Hardcore fans of Smith however (as well as teenage girls we’re told) will be getting something they can not only stomach, but possibly enjoy. YOGA HOSERS aspires to be a strange amalgamation of SCOTT PILGRIM and GREMLINS. Youth culture infused with elements of wacky horror. 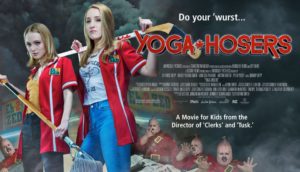 If there’s one area where YOGA HOSERS undoubtedly succeeds it’s with its energy. Bookended by musical numbers (opening with a cover of Anthrax’s “I’m The Man” and closing with an even more rousing rendition of the Canadian national anthem) the film feels just about as punk rock as a Kevin Smith movie about two 15 year old girls from Canada could get. Both the leads Harley Quinn Smith and Lily-Rose Depp are legit presences in their own right, stepping far outside their famous fathers’ shadows. Honestly, Harley Quinn is someone you can see tackling not only far broader comedic roles, but horror scream-queen ones as well. Johnny Depp reprises his role from TUSK as the French-Canadian man hunter Guy Lapointe, which if you want to talk about polarizing…I’m glad at least Depp is getting a kick out this schtick because it really leaves the rest of us scratching our heads. Throw in a Jason Mewes cameo (he actually shares the screen with Depp) and a sub-plot involving evil, yet non-vaginally invasive Canadian Satanists, and you’ve got enough material and swagger to fill the film’s brisk 89 minute running time.

But while the film is undoubtedly funny at times (there’s a scene between Harley Quinn Smith and her real life mother Jennifer Schwalbach Smith that’s honestly one of the funniest bits from Kevin’s past few movies) it never quite takes off full steam ahead with the film’s antagonists, Nazi-clone bratwursts and eventually longtime Smith podcast collaborator/modern day Rich Little Ralph Garman. Honestly it’s in the villain department where any stylistic comparisons to GREMLINS or even TERRORVISION have to stop. Honestly, they’re the film’s achilles heel. 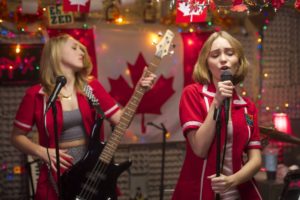 And maybe that’s because where with TUSK the core concept behind the creation of that movie was a dude in a walrus suit, the themes at play within YOGA HOSERS are more about youth and femininity. Ultimately time and a wider audience will judge YOGA HOSERS far more accurately than any of us can do today. Smith set out to make a horror/sci-fi/comedy vehicle for his daughter. How much of an artistic success it is it’s up to the teenage girls of the world to decide.