The first time I saw CANNIBAL HOLOCAUST, one of the most legendarily controversial exploitation films ever made, I walked out of the theater in a state of confusion. I was disgusted by everything the film did, and everything it stood for. I hated it. More than that, I momentarily hated the fact that film had even been invented, because of creation of film had resulted in such a loathsome piece of work.

I got over it, of course. I’ve still never seen CANNIBAL HOLOCAUST a second time, and even though I own it on DVD, autographed by director Ruggerto Deodato, I’ve got no inclination to. But I respect it now, at least in the sense that it got a reaction out of me so severe that no movie since then has even come close to approximating the type of hate it produced.

It wasn’t the gore. It wasn’t the idea of natives as brutal savages. It wasn’t even the animal torture. These are all par for the course, and I’m certainly fine with at least the first two in my exploitation fare.

No, my hatred for CANNIBAL HOLOCAUST came from the fact that the film chastises you for watching it. It features characters berating audiences for even wanting to see such things, essentially ripping into the only people who’d want to see the movie that exists before them. CANNIBAL HOLOCAUST is the asshole acquaintance in high school who keeps daring you to do stupid things, mocking you and calling you chicken until you do them, and then calls you an idiot for following through. It’s the Lucy van Pelt of movies.

MAKING OFF, the feature film debut of French filmmaker Cédric Dupuis, gets into this kind of moralist territory, though unlike Deodato’s film, MAKING OFF’s chastisement comes from a reprehensible character whose sense of morality is so out of whack that any sort of mockery can’t be taken seriously. It actually works much better, making the film feel more like a satirical take on such hypocritical morality rather than the angry tantrum of a gore pioneer.

The character in question is, like the director, named Cédric Dupuis, played in the film by Olivier Bureau. In Dupuis’ “forward” to the film, he talks about how his desire to make “the best horror movie flick ever” went awry, and instead he is to show the audience the “making of” of the movie that stands incomplete. The rest of the film is shot found-footage style, though Dupuis has made certain editing decisions in order to keep things at a brisk pace.

We soon realize that there was no chance that this was going to be the “best horror movie flick ever” in the first place, as Dupuis’s cast consists of a few random friends that have no acting talent whatsoever. He quickly loses his job (and casts his job’s replacement, an ex-boyfriend of his girlfriend Camille) and argues with Camille about money. He chastises his cast about flubbed lines, unprofessionalism and scheduling, and not having enough emotion when they put on a shirt. Everything quickly turns into the worst home vanity project ever made.

Dupuis has had enough when Camille starts questioning his vision and telling them that his movie is crap, editing out her criticism and commenting “I don’t admit such thoughts from non-artistic people.” He then hits her in the head with a sledge hammer.

That’s when things in MAKING OFF start to get rough and escalate quickly, and the next 50 minutes or so is a cavalcade of increasingly revolting mayhem, as Dupuis offs his cast and crew for the camera in unrelentingly splattery fashion that will make you second guess the “reality” of it all. And it’s not just that the murders are gory – what Dupuis does with the bodies afterwards should sicken even the most hardcore goremonger, as it soon gets into NEKROMANTIK territory, with Dupuis struggling to find new and inventive ways to utilize with his friends’ corpses. 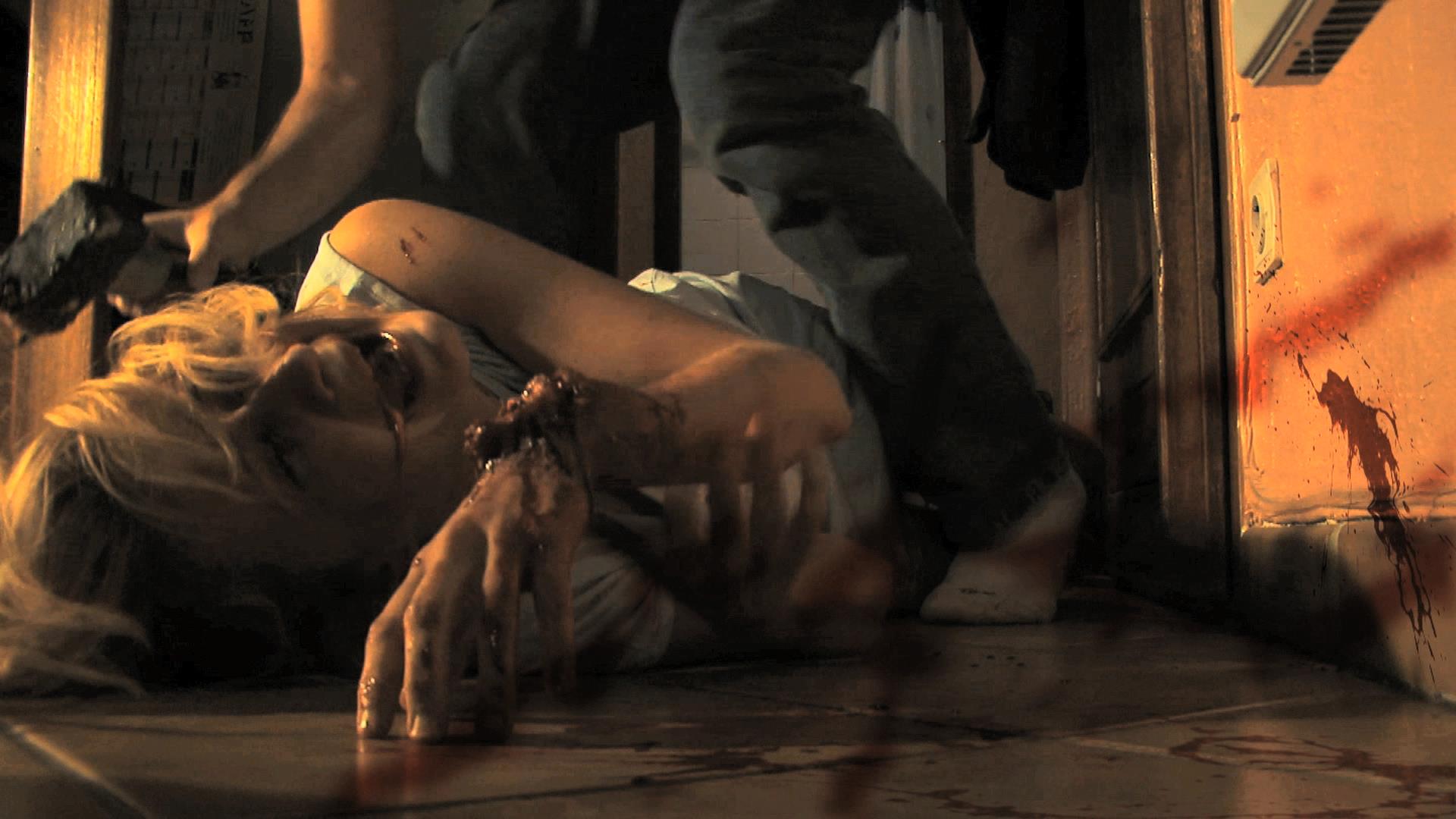 MAKING OFF is certainly a well-made film, with convincing performances and splatter that will make you wonder how the hell they did that. It’s completely unflinching, pixelating items on screen only in the case of brand names or, bizarrely, genitalia, because while watching a head get brutally bashed in by a sledgehammer is fine, but the sight of a penis would have apparently just proved too much for audiences.

There is an absurdity to it all, even in the most stomach-churning moments, and that’s what makes MAKING OFF tolerable instead of just a brutal endurance test. More akin to MAN BITES DOG than HOLOCAUST even when the lead character is making pronouncements about how gory he has to make the film just to keep people interested, MAKING OFF benefits from a lead that’s strangely charismatic even if he’s so reprehensible and hypocritical that you want to punch him in the face well before he starts on his bloodthirsty rampage. The gallows humor comes into full force during a beatbox scene in which Dupuis edits together various body beatings into a musical montage.

You could certainly make the argument that the film is just as pointless as the Dupuis character contends it is, and aiming solely for the grotesque and existing only to shock and bring notoriety to those who made it.  And you’d probably be right!  But in a case like MAKING OFF, the argument that it serves no artistic purpose seems just as meritless, as simply revving up the extreme brutality factor in an attempt to nauseate the viewer seems, well, like the actual reason the film was made.  It’s created for audiences looking to be repulsed, and by that measure, MAKING OFF succeeds with style, allowing for enough wit to make the whole thing seem like a terrible, repellant (yet well-told) joke meant to offend everyone in the world.

It’s such an effective, savage and darkly comic film that it’s a bit of a puzzle why it suddenly pulls its punches as soon as the credits roll, promising that no animals here harmed during its making and that it’s not based on a true story.   It’s as though the filmmaker just told the dirtiest, filthiest, most convincing version of the Aristocrats ever uttered and then ended it with “j/k,” just to make sure everyone understood that it wasn’t for real. We know it’s not! You don’t need to turn the lights on as soon as the last frame fades out!

MAKING OFF is certainly an insanely revolting film, going out of its way to shock and disgust in ways that feel more like a dare than anything resembling a narrative, but the film’s odd structure makes it work most of the time. It’s certainly a litmus test for how much you can take, but thankfully, unlike the patronizing CANNIBAL HOLOCAUST, it doesn’t shame you for watching it. Not to say you won’t be ashamed – this is, to put it in the popular vernacular, some seriously fucked up shit – but that morality is on your conscience, not something decided for you.

MAKING OFF is available for streaming at Apprehensive Films’ website here!