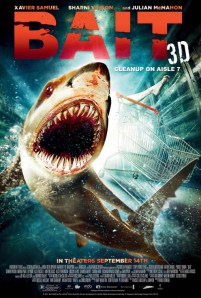 I fell in love once.  It was just about perfect for a while, but then it ended.  I took the loss hard, ending up in increasingly seedier neighborhoods, experiencing increasingly trashier replacements in my desperate search to fill the void left empty after that one perfect moment.

That story could be a description of my love life… or I could just be talking about great-white-shark movies.

Every time I’ve written about JAWS, I’ve argued that it’s the one great great-white-shark movie, the monarch in its genre.  It’s not the hardest argument to win, really.  After JAWS, the pool of competitors is pretty shallow.  Just about every aspiring horror filmmaker feels up to taking a crack at a zombie movie or a vampire movie, but hardly anyone wants to touch the great-white-shark genre.  Part of that is no doubt a budgetary concern, as the legend behind the troubled JAWS shoot is almost as well-known to cineastes as the movie itself.  CGI sharks don’t look right, but we all know the probable pitfalls of having a practical shark model too.

The other problem is that having a man-eating shark as the villain of your movie is limited by circumstance and the boundaries of imagination; in other words, as long as the characters stay on land or on the boat, there’s no movie.  You need reasons to get people into the water, and there are theoretically only so many ways to do that.

To that end, Australia’s BAIT (3D) has a decent high-concept, at once supremely silly and once you think about it a little, weirdly believable.  A tsunami batters the Australian coastline, destroying a supermarket and killing most of the people in it, and stranding the small group of survivors inside… with a great white shark washed in from the ocean. It could happen!  The odds are about as likely as a Victoria’s Secret model personally delivering a pizza to me sometime this evening, but it is physically possible to occur upon this realm of reality.  The best horror movies are able to convince an audience of the believability of their extreme concepts.  BAIT is not among the best horror movies, but one could do plenty worse as a starting point than JAWS meets DAWN OF THE DEAD.  It’s a great set-up for a joke, anyway.

The problem with BAIT is that its makers seem undecided as to whether to treat their premise with solemnity or camp.  The initial script for BAIT was co-written and meant to be directed by Russell Mulcahy, who managed the tonal balance better in the 1984 killer-boar movie RAZORBACK.  I’m not fully aware of the circumstances behind Kimble Rendall (second-unit director on movies such as 2007’s GHOST RIDER) replacing Mulcahy, and it’s unclear as it is with most movies where to apportion credit or blame, but let’s just say that BAIT is a movie of mixed pleasures.

The cast of characters who serve as the titular fodder are part of the issue.  The main pair of protagonists, played by Xavier Samuel (who was in THE LOVED ONES) and Sharni Vinson (best known to folks like us as the star of YOU’RE NEXT), as an estranged couple of lifeguards brought together by fate and nature, are certainly pretty and likable enough, but a more callow couple (played by Lincoln Lewis and Cariba Heine) trapped underwater with their yipping pet lapdog are probably more obnoxious than intended.  A little bit more interesting, at least on paper, are a pair of armed robbers played by Dan Wyllie and Julian McMahon, the latter of whom played Doctor Doom in those two lousy FANTASTIC FOUR movies and is now almost entirely done morphing into Kevin Spacey.

For me anyway, I didn’t love anyone enough to worry too much about them — not the way I do about, say, Quint in you-know-what — but nor did I loathe anyone enough to want to see them munched on by sharkteeth.  It’s the oldest criticism in the book but it’s a mistake movies keep on making:  If the characters aren’t worth caring about, the movie isn’t worth remembering.

Still, BAIT has engaging moments.  The shark CGI isn’t great, but the tsunami scenes are actually convincing.  The main sets — the submerged parking garage and the flooded supermarket — are believably-rendered environments.  One of the early character deaths isn’t the fault of the shark and is surprisingly effective for it.  (It’s reminiscent of a similar scene in THE GREY, though not as well-executed.)  The final scene, with its real-world implications, tries to give the movie an emotional resonance it hasn’t really earned, but at least it indicates that someone somewhere was thinking about issues other than mangled viscera.  Thinking is the fun part of a movie like BAIT — it’s not remotely as gripping as the movie it compares to unfavorably, but like that movie, it makes you think twice about getting in the water.  At the very least, it leads you to imagine what you might do in a situation like this one, and if it’s better to have a movie that wraps you up in its every moment, it’s some small consolation to have a premise that sparks the imagination. Word of warning, however:  Whatever you do, don’t make this movie the second half of a double-feature with THE MASTER. 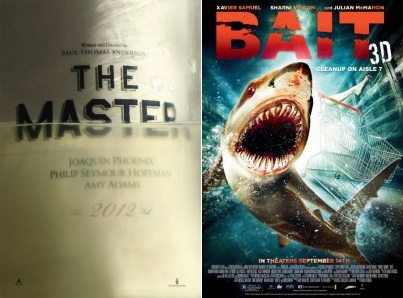