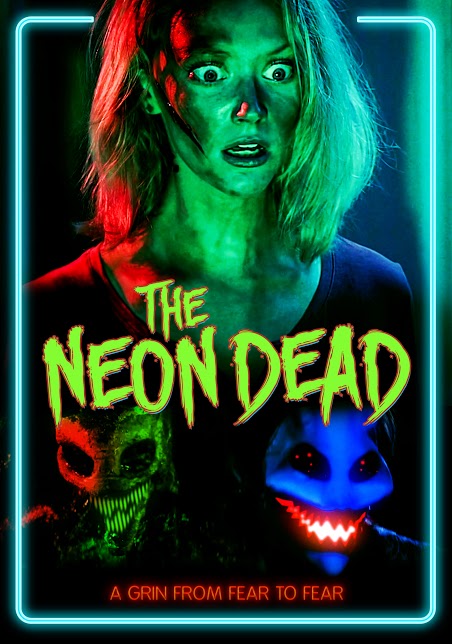 Next to a Trump presidency, I think we can all agree that the last thing any of us need is another zombie film. Because of this fact, I went into THE NEON DEAD (previously reviewed on Daily Grindhouse under the original title INVASION OF THE UNDEAD) with no small amount of trepidation. Thankfully, I was pleasantly surprised to discover that the film was not just another low-budget zombie film. It possesses ambition and an anything-goes attitude that pushes it beyond the run-of-the-mill and into bizarre funhouse territory. 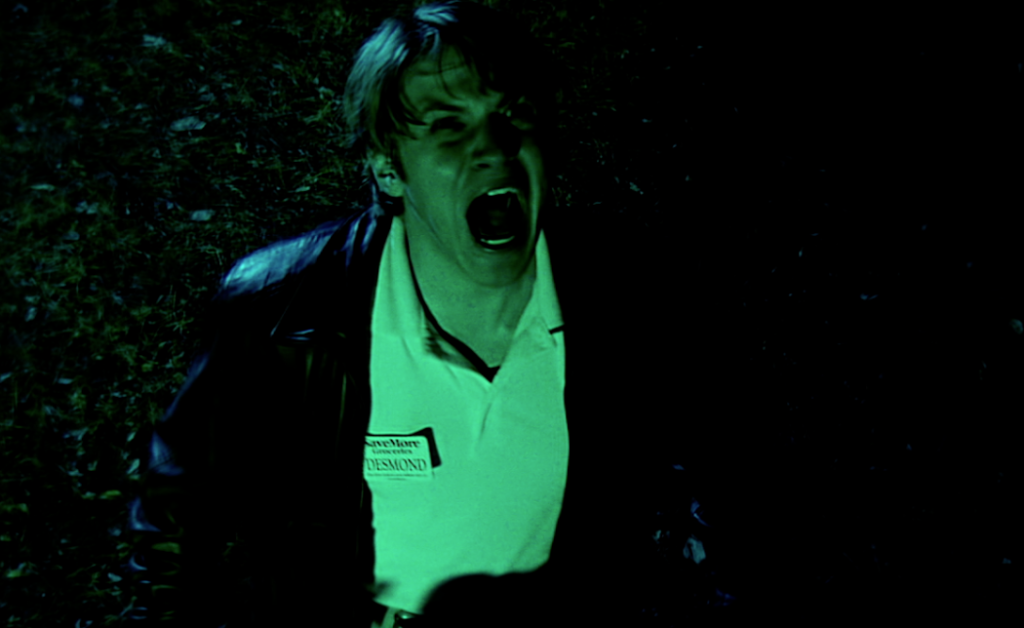 Allison (Marie Barker) is just like millions of other young adults in their early twenties. Namely, she has just graduated from business school and is unemployed. But despite her best job prospect being assistant manager at a crappy restaurant (an interview she scored only because the manager has been creeping her social media photos), she is still better off than most unemployed millennials, having had the good fortune to inherit an old plantation home. It’s too bad the house is haunted by an undead woman who glows red and green and has the bad habit of using Allison’s hairbrush to scrape at her decaying scalp until it rips off in bloody chunks.

Through a convoluted series of circumstances—that become cleverer in hindsight after some third act character bits are clarified — Allison learns of a pair of “paranormal exterminators.” The exterminators—Desmond (Greg Garrison) and Jake (Dylan Schettina) — get right on the job… after they find someone to cover their shifts at the grocery store.

Desmond is the smarmy salesman/face of the company who alternately treats Allison’s situation like an annoyance and a chance to hit on her at every turn. Jake is the geeky brains of the operation who bristles when anyone refers to the undead woman as a zombie, explaining that only people controlled by a voodoo curse should technically be called zombies. At the very least, THE NEON DEAD is trying to correct decades of incorrect labeling.

But if the creatures (the undead woman in Allison’s house was only the first to show up) are not zombies, what are they? 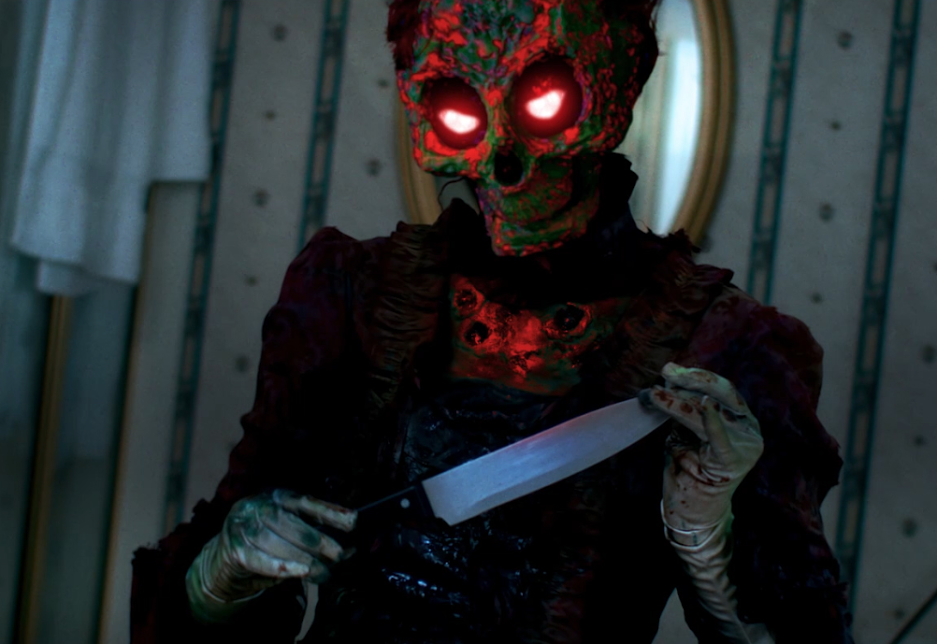 According to Jake, they are “Sons of Z’Athax.” A lengthy flashback sequence shows how an ancient space demon/god was conjured by one of Allison’s ancestors (Andrew Puckett) in the 19th century. His reward was the power to resurrect and control the dead, but he also wound up looking like a more sinister, glowing version of Jack Skellington from THE NIGHTMARE BEFORE CHRISTMAS. After biding his time for a couple of hundred years, he is now ready to bring Z’Athax from his world to Earth, which — of course—would bring about the end of humanity. The only people standing in their way are Allison, Desmond, and Jake. Needless to say, with this trio as their defenders, things look bad for humanity.

While there is essentially nothing new in THE NEON DEAD, the familiar elements are given new wrinkles and mixed together for maximum entertainment value. Writer/director Torey Haas has his roots in visual effects, and the film certainly shows off a visual flair with the unique spins the various creatures, demons, and aliens are given. But Haas also shows superior story chops for this being his debut feature as a writer/director. The film is never afraid to veer in unexpected directions or tones, flipping from silly to surreal to tragic and back to silly again within the course of one scene. Not all of the tonal shifts work, but Haas never lets the movie drag and always has an entertaining bit around the corner if a gag misfires. 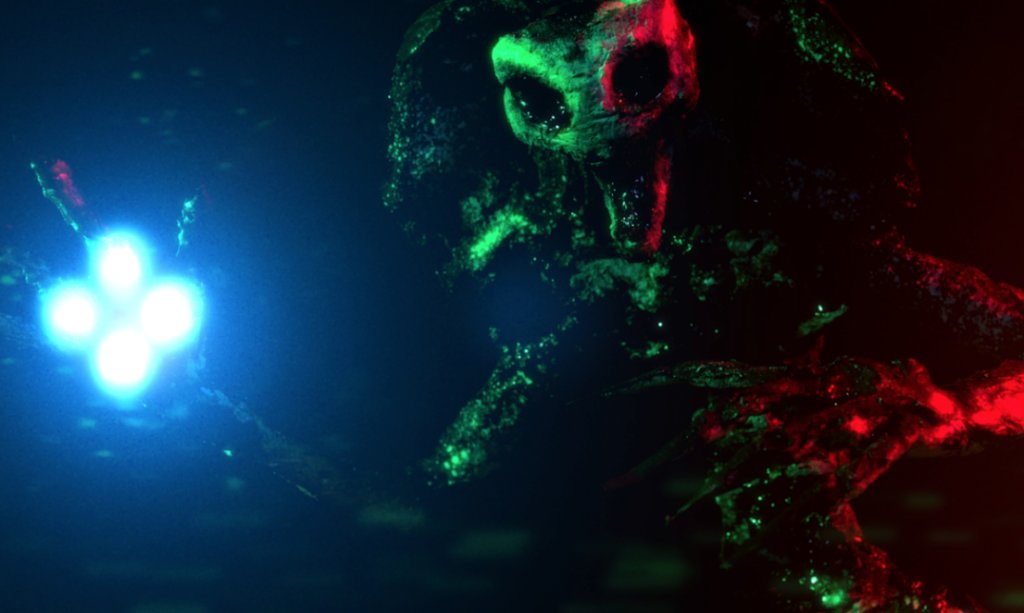 The performances, as is to be expected for such a low budget production, are hit or miss. Barker stands out for giving Allison a sunny, look-on-the-bright-side disposition without being annoying. That her most optimistic moments are usually rewarded with something horrible happening is a nice running joke. Garrison is a little too much in the early going as Desmond, but he settles into a nice groove once he backs off the smarm, eventually making himself a welcome presence as he takes on the role of reluctant hero. Schettina has the least to do of the core cast, but he does bring a hint of self-aware humor to his bookish nerd character. He just feels a little under-used as the film goes on. Most of the supporting cast is clearly made up of amateurs and their performances run the gamut of what you would expect, but none of them are so rough as to upend the movie. 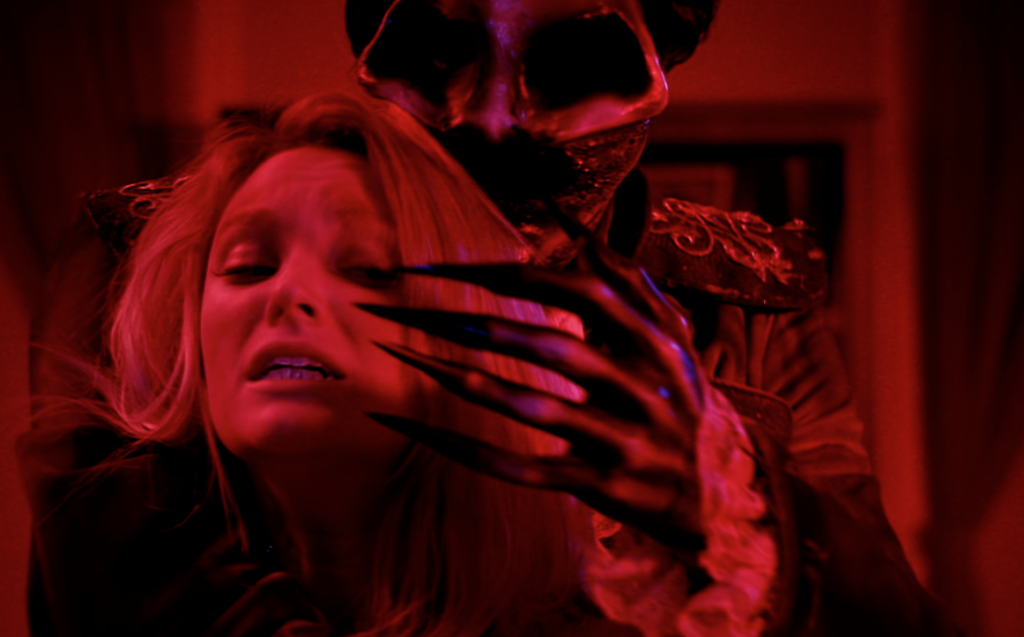 While there are moments of gore and some mean-spirited insinuations of child sacrifices and possibly worse by the villain, THE NEON DEAD is welcomingly light and fluffy entertainment. With hints of Lovecraftian cosmic horror tossed in for good measure and an ever-shifting plot, it is the kind of ambitious film the DIY horror scene should be producing more of.