“For 39 years, Alcatraz held society’s most depraved killers. Now it’s home to something even worse…”

I’ll reassure you of something important right now: The film absolutely lives up to the title SLAUGHTERHOUSE ROCK. Elvis and Kurt Vonnegut fans alike will be equally confused by 1988’s bop around Alcatraz, an ambitious horror movie that has a real fusion restaurant approach to its plot: possession over here, a very disturbing demonic rape scene there, some well-dressed historical horror setpieces, a pact with the devil, and then we got a dab of a dance number just to make sure everybody gets their nickel’s worth.

We open with a gory double-wake-up-dream sequence right before the opening credits—so you know this movie has its bad-boy attitude firmly in place as a proper rock ‘n’ roll horror flick. It follows that up with three young college men in mom jeans discussing Alex’s (Nicholas Celozzi) dream problems and how he should seek help. You better believe that SLAUGHTERHOUSE ROCK knew that toxic masculinity had no place in real-deal rock ‘n’ roll, baby! They have good reason for their concern, though: Alex’s night terrors are bursting through his day-to-day life with demon arms, classic pulsating walls, and all. 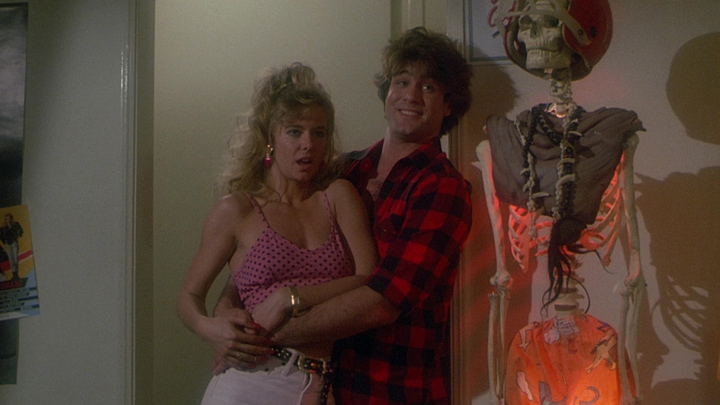 The boys all live in an apartment with a party dude skeleton, multiple surfboards, and the front of a car attached to a living room wall shared with the bedroom, so anytime someone has sex on it anyone on the couch will think some kind of CHRISTINE rip-off is about to kill them as the car jerks towards them. As much as I love this incredibly memorable bachelor pad, I also know it would give me terrible sleep paralysis if I had to live there. Could the entire bloodbath of SLAUGHTERHOUSE ROCK have been avoided if they just got an interior designer? I’m glad we’ll never know! 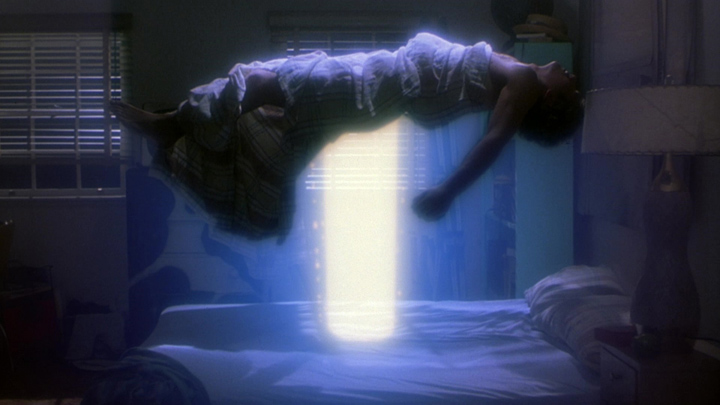 The (frankly very disturbing and visceral) nightmares escalate to the point that Alex can walk around and interact in the nightmares, and fire spontaneously ignites in the bedroom as he sleeps. To the library! It turns out Alcatraz Island has a dark, cursed history even before it was a notorious penitentiary, and in true “those who cannot remember the past are condemned to repeat it” horror movie fashion, they built the prison right on top of it. There was a nasty cannibalistic serial killer involved, and Alex is somehow channeling the hellish experience of his victims through his dream state. After yet another sleepless night for Alex, his roommates, and their girlfriends, they all decide to grab their occult expert teacher to tromp to the decommissioned Alcatraz in the middle of the night to finally fix the problem that’s grown to including levitation.

Early in the film, we hear the roommates read the newspaper and discuss “the mangled remains of the rock band Body Bag” showing up, and that ends up leading us to…Toni Basil! She plays Sammy, who was in the band, and she’s trapped in Alcatraz as a helpful ghost. Her dead (but still fashionable) self was using Alex as a conduit to stop a monster they released, which is just vague and strange enough to leave the stage wide open for all the disconnected horror bits about to populate Alcatraz. Good for them. Anyway, one of the film’s most memorable scenes comes about when Alex challenges Sammy to prove the outlandish things she’s saying are true. This leads to a dance number that also works as a clip show of the movie’s best special effects shots?—and thank goodness, because at almost an hour in, the audience has obviously already forgotten all that gooey stuff?—and she summons Alex’s astral self out of his body. “I need a haircut!”

Here’s where we find out that the band and the growing gang of dead teens become AN AMERICAN WEREWOLF IN LONDON-like good-natured ghost-ghouls who are trapped in this limbo, and at this point, it feels like SLAUGHTERHOUSE ROCK copied off the work of kids in several different classes and accidentally turned everything in at one time. But dammit, it does it with panache.

Two years after SLAUGHTERHOUSE ROCK’s release, Toni Basil would revisit the subgenre in 1990’s ROCKULA, a horror/comedy romp I’m deeply in love with. As a sexy ageless vampire mom who, yes, finds a way to work in a dance sequence, it was truly the role Toni Basil was born to play. 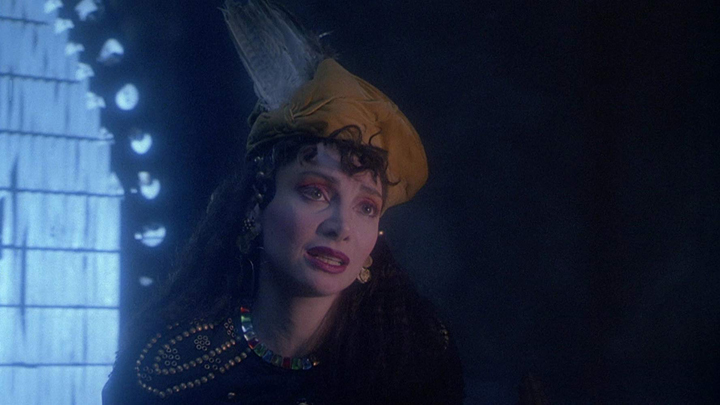 One of the biggest draws here is the soundtrack by Mark Mothersbaugh and Gerald V. Casale, and the film officially credits Devo as the songs’ performers. That said, considering Mothersbaugh’s distinctive style both in his band and as a very successful film and television composer for decades, very little of his trademark flourishes show up here. However, this was only the second non-Devo movie he composed for and the first that wasn’t a REVENGE OF THE NERDS sequel—so maybe he was just feeling his way through a frankly tone-chaotic movie while he was also working on the music for PEE-WEE’S PLAYHOUSE. There are a few measures of his distinctive squishy plinking, but they last mere moments, almost as if he were shy about sounding too offbeat, but it’s like I always say: “If you can’t get hog-wild creatively in SLAUGHTERHOUSE ROCK, where can you?”

We do get some solid guitar riffs at the climax, but it’s almost too little too late at this point. If Devo ever wants to go back and redo the soundtrack, I think it would be deeply strange to everyone other than me, and in that case, I really, really think they should just go for it. That said, The Golden God award goes to “The Only One,” the closing song featuring Basil on vocals with her longtime collaborators Devo, and it’s a beauty in how it’s the best of the twinkling, synthy, mildly dark power rock-pop songs humankind perfected in the 1980s. THE LOST BOYS probably wanted to borrow it! I only wish they performed it as the Body Bags.

When SLAUGHTERHOUSE ROCK has some goofiness or lets a character wield sarcasm like the weapon it was in this time period, it always knows what it’s doing. The movie being in on the joke doesn’t take away from its fun, thankfully, and the intense carnage makes it a classic Saturday night rental to channel the wonderfully unsubtle charm of ‘80s splatter movies. While the soundtrack will ultimately leave you wanting more of that good stuff, the old-school grue-strewn special effects are spectacular and plentiful, and that’s where its true rock ‘n’ roll spirit lives.

Or, you know, it lives in an abandoned prison waiting to dance for some schmuck. 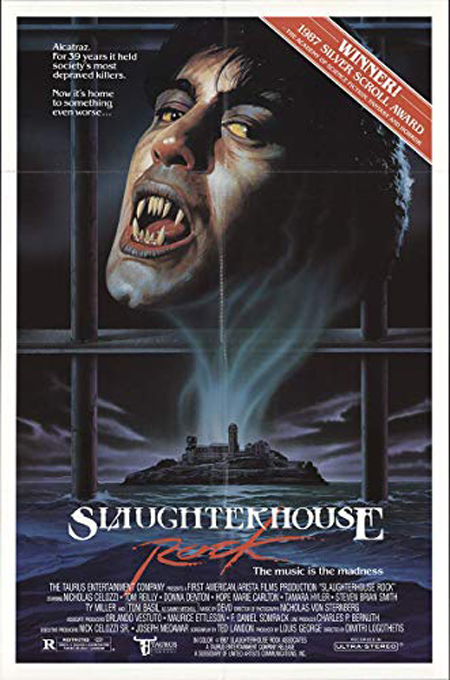