Hollywood’s golden age of the comedy vampire (1985-1990) came to a bleary end with ROCKULA, a genre-blending miasma from Luca Bercovici (GHOULIES) that was filmed in 1988 but not released until two years later. ROCKULA is a romance about an immortal ghoul barely out of his teens who is doomed to meet, love, and lose the same woman every 22 years. This film is also a musical molded by, and for, the MTV era (one plot point hinges on a singer’s video premiere). And, of course, ROCKULA is a comedy — which we know because it stars Dean Cameron, Toni Basil, and Bo Diddley.

Cameron plays Ralph, the slightly tortured but generally kind-hearted vampire who wears a retainer, and Basil is his wacky mother, Phoebe. Even for the undead, these two have an odd relationship. When Phoebe asks her son how she looks before her big date, Ralph makes the “turn around so I can see the caboose” gesture. Later, Ralph walks in on Phoebe while she’s taking a bubble bath. The kid seems relatively unfazed by his naked ass mom, as well as the subsequent discovery of a submerged man also in the tub. Phoebe introduces Ralph to the male company as her brother. Is this what happens to families when no one can ever die?

Paula Abdul was originally cast as Ralph’s object of affection, Mona; who knows how this would have affected her reign as a pop music superstar or the future of our entertainment landscape. If Abdul stuck with ROCKULA, would Britney Spears have starred in DRACULA 2000? In our actual, less interesting, timeline, Tawny Feré took the Mona role. She holds her own across a cartoonish landscape that includes Thomas Dolby as her sleazy manager, Susan Tyrrell as a gruff bartender, and a truly disgusting bat puppet they graciously save for the final act. 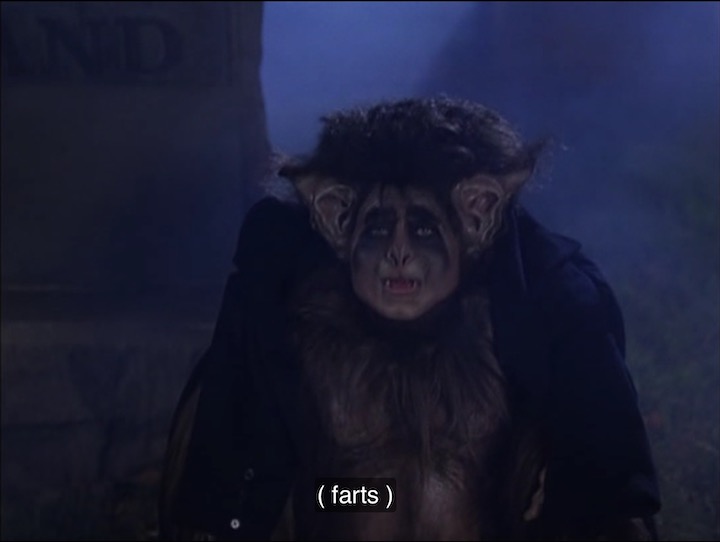 It’s difficult not to be charmed by Dean Cameron, the wild-eyed Oklahoma native best known for SUMMER SCHOOL, but he’s handcuffed to a degree in ROCKULA as the sweet and somewhat meek Ralph. The character doesn’t play to his strengths at acerbic, weird comedy. Thankfully, ROCKULA grants Cameron a more comfortable lane as the mirror version of Ralph, a vaguely evil twin who only exists quite literally in the mirror. This violates a basic tenet of vampirism — being undead is supposed to make you invisible in reflective surfaces. Phoebe can’t see herself in the mirror, but Ralph can. Is his father human? Maybe this is all explained in the ROCKULA novelization.

ROCKULA was probably a lot of fun to make and it offers individual elements that are amusing. However, the sum of its parts is neither classic nor consistently funny. One might assume that with Basil, Dolby, and Bo Diddley (as a blues singer with whom Ralph likes to hang out), at least the soundtrack might be incredible. As it happens, the filmmakers relied on outside songwriters to conjure up most of the music. It’s a virtual “who’s who” of “who’s that?” of Reagan-era recording talent. Marc David Decker, composer for BIKINI ISLAND and PSYCHO COP RETURNS, tries mixing new wave with bebop and screaming electric guitars for ROCKULA’s bizarre opening theme; Decker performs this car crash himself under the alias “Dr. Daddio.” The weak monster ballad “By My Side” that Mona and Ralph share was written by David Aronson (not the Lithuanian painter) and Vincent Scrima (probably the bassist from jazz rockers Sender). Aronson also wrote Mona’s melancholy “Break These Chains;” Feré gets through it…but you just know Paula Abdul would have made it a banger. 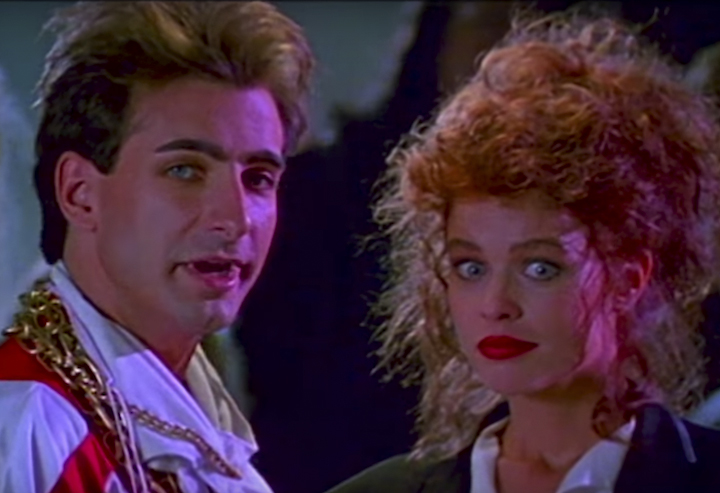 ROCKULA’s brain trust asked Cameron to contribute a few songs to ROCKULA and he did, one of which is a leaden foray into hip hop called “Rapula.” Our leading man does his best Barry Sobel in a track suit, gold chains, and ski cap as he delivers hard turds like “I’m not Frankenstein or the Wolfman either, he’s the DJ, I’m the vampire.” Cameron claimed he read Bram Stoker’s Dracula to prepare for ROCKULA and it shows in “Rapula” when he rhymes “Mina” with “my wee-na.” Meanwhile, Bo Diddley, one of the founding fathers of rock n’ roll, spends “Rapula” as a backup singer, hopping around in spandex and a yellow cape like a heavily drugged bumblebee.

Cameron is also responsible for the heavy metal Elvis tribute that runs over the end credits, another dopey song that starts with some truly fifth grade references to his crotch turkey. This isn’t a crime, necessarily. In fact, there is greater pain when Cameron, adorned in the classic rhinestone Presley attire, shouts, “Yabba dabba doo!” during the call and response section of his grand finale. No need to drag The Flintstones into this mess.

The most positive comment one can afford ROCKULA is that it thwarts cynicism. The Thomas Dolby character exists as the personification of that trait, and he gets a fine comeuppance as the dust is settling. Also, this film looks completely sane next to the hyper-sexualized vampire cinema that sprung up a handful of years later via Francis Ford Coppola’s BRAM STOKER’S DRACULA and INTERVIEW WITH A VAMPIRE. We get it; Dracula fucks.