Anyone who regularly seeks out indie films on opening weekend knows what it’s like to be bowled over by a film or performance and make a bold prediction. I saw DONNIE DARKO very early and immediately said “this Gyllenhaal kid is gonna be a star” so…I pretty much discovered the guy.  (I also said “Richard Kelly will have an incredibly successful directorial career” but you can’t win them all.) When I walked out of an early screening of ANNA AND THE APOCALYPSE, I unequivocally proclaimed this Christmas zombie musical was about to be a breakout holiday hit, destined to be so popular that you wouldn’t even be able to call it a cult favorite. Then it went on to pull in less than a million dollars at the global box office. 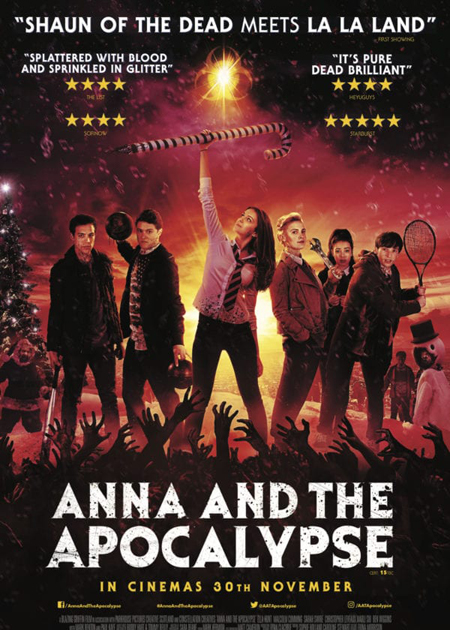 Admittedly, ANNA AND THE APOCALYPSE is about as light in the scares department as SHAUN OF THE DEAD. The two films are also a perfect pair when it comes to tongue-in-cheek British humor. And just like SHAUN, ANNA AND THE APOCALYPSE features a charming young cast destined for bigger things, none more so than Ella Hunt in the title role. The songs that power this musical are by no means complex, and some even feel a bit dated—but there are several brilliant earworms that work whether or not you’ve seen the film.

Opening numbers “Break Away” and “Hollywood Ending” are perfect pop gems that essentially deliver the same message, but they are so damn good you can overlook this. Anna and her friends are quintessential wistful, broody teens wanting more from life than their small town and tiny school can offer them. “Break Away” is perfectly corny and does its job introducing the cast and setting up everyone’s particular dream and goal.

In “Hollywood Ending” Ella Hunt takes the lead, dancing around the cafeteria in her school uniform doing her best “…Baby One More Time”-era Britney Spears impression, which is pretty easy seeing as she is a dead ringer for young Britney‚ not to mention born in the same year the song debuted, 1998. (I’m way too old to be loving teen movies.)

Now we’re three or four songs into this thing and other than a little bit of foreshadowing, there’s not a zombie in sight. We’re basically watching HIGH SCHOOL MUSICAL here and that’s not a complaint. It’s time for the big school talent show and a hilariously naughty tune from Anna’s friend, Lisa (Marli Siu). “It’s That Time of Year” is your classic horny-for-Santa throwback to Eartha Kitt’s “Santa Baby” laced with such subtle double-entendres as beseeching Old Saint Nick to unload his sack. The best part of this little song is it’s entirely kid-friendly for the 12 and under set. My wife and I have enormously enjoyed watching our boys innocently sing about jumping up on Santa’s lap to unwrap a special present. That’s the magic of this film. 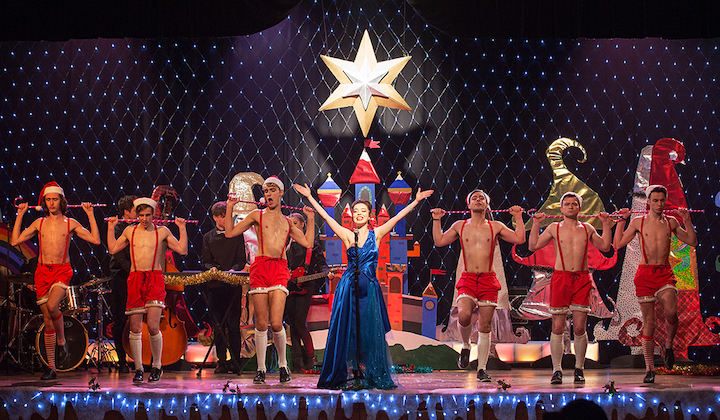 Though I wasn’t aware of it when I first saw the film, Ryan McHenry, the writer/director of Zombie Musical and co-writer of the ANNA AND THE APOCALYPSE screenplay, passed away in 2015 at age 27 after battling osteosarcoma. As silly as a zombie musical may seem, something about seeing McHenry’s passion project picked up by his friends (like eventual director John McPhail, and co-writer Alan McDonald, amongst many others) and turned into a movie that wears its undead heart on its sleeve really resonated with me.

Let’s skip ahead a bit to the part where these teens start cracking some zombie skulls. Bad boy Nick (Ben Wiggins), a former hook-up of Anna’s, surprises no one as his character transforms into a halfway decent dude. But he surprises everyone when he shows off his pipes with “Soldier at War” as he has lackeys go to work with assorted weaponry. If you consider Bon Jovi a metal band, than this track is a bad-ass rocker. It has been a mainstay on my running playlist for a couple years now, reminding me when I’m overdue for a rewatch of the film.

Inevitably, we get the final battle between Anna and her deranged principal (Paul Kaye). “Give Them a Show” is not a show-stopper, but a decent girl-power anthem that gets us through the climax. While the outcome of this face-off is never really in doubt, the film does a great job of establishing some actual stakes. Not all of these teenagers survive to the end credits, which I found in my naïveté to be genuinely surprising. When the first of Anna’s friends succumbs to the horde it’s a real “oh shit” moment. An earlier song proclaimed 16 times that there was “no such thing as a Hollywood ending”, yet the film still lulled me into thinking I knew how it would end.

If you managed to avoid this film over the last year, get that corrected now and then schedule your second viewing for the Holiday season. Thanks to its dreadful ticket sales, timeless charm, and the rabid love of its small but growing army of devotees, ANNA AND THE APOCALYPSE remains bound for cult classic status. There’s still room on the sleigh for you. 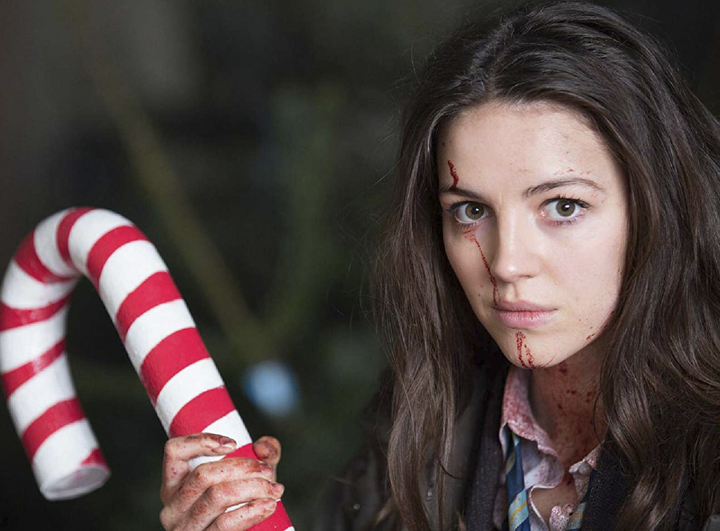 Andrew Campbell
Andrew Campbell is a weekly contributor to the daily movie review podcast One Movie Punch. His love of cinema began in the early 90s when his parents made the mistake of approving R-Rated rentals on his Fast Forward Video membership card. After watching and tweet-reviewing a movie every day for two years, his double-digit Twitter-following of bots demanded he expand into longer, scripted reviews. Andrew has been exclusively covering films that opened at Fantastic Fest.