(Please note, this post on JENNIFER’S BODY dates back to October 2009 and originally appeared on Daily Grindhouse in 2015. It has since been updated and reformatted by the author.)

A good horror premise, whether it be for a scary movie or a monster movie, stems from a theme people can relate to. FRANKENSTEIN has to do with arrogance and the misuse of science.  With THE EXORCIST, it was the loss of faith. With THE EVIL DEAD and a ton of similar movies, it’s about the primal fear of the woods. With JAWS, it was the primal fear of being eaten alive. With KING KONG, it’s that chicks dig jerks. GODZILLA was all about atomic anxiety. HALLOWEEN is about not feeling safe, even in the suburbs. Just about every zombie film has got something to do with death. Just about every vampire film is about bad sex.

In 2009’s JENNIFER’S BODY, the theme is high school friendships and the way in which girls in particular can suddenly and cruelly turn on each other. This has happened to every girl I know, and it’s upsetting and weird and usually pointless. Girls can be best of friends one day, and the next there’s a drastic turn for the sadistic, with no explanation. Sometimes they come back; sometimes they stay evil. 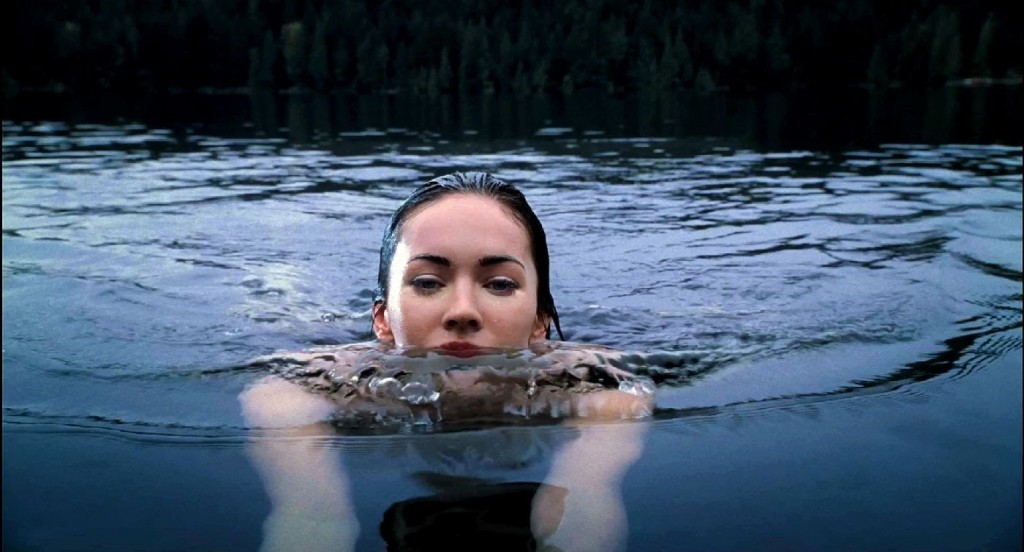 Contrary to the popular imagination of the unimaginative, female horror fans absolutely exist, and I hope that they find this movie. This one’s for them. It’s a clear indication that gutsy horror movies aren’t just made by men; this is a strong, distinctly feminine horror film from director Karyn Kusama, screenwriter Diablo Cody, and stars Megan Fox and Amanda Seyfried. Not that I’m indicating it’s just for ladies — not by a long shot—but I imagine that women especially will get a kick out of JENNIFER’S BODY. 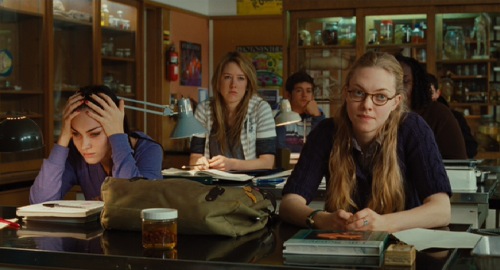 Jennifer and Anita (“Needy”) are best friends from childhood who have remained close even if they’ve grown up differently. Needy (Amanda Seyfried) has a nice-guy boyfriend (Johnny Simmons) but is otherwise insecure and mousy, while Jennifer is Megan Fox in a cheerleader outfit. Jennifer is the alpha-female even before she’s turned into a supernaturally powerful demon in a satanic virgin sacrifice gone horribly wrong. Jennifer needs to feast on the insides of high school boys, and ultimately no one but Needy can stop her.

You know a horror movie’s got something going for it when it has a secondary premise that’s clever enough to carry its own movie in an alternate universe. I loved the idea of the nice-guy rock band (perfectly, blandly titled “Low Shoulder”), headed by an appropriately arch Adam Brody, who turn out to be evil and abduct Jennifer to sacrifice her to the devil in return for fame and fortune.  The idea that a Matchbox 20, or a Maroon 5, or some other middle-of-the-road whiteboy band with a number in the title are satanic and murderous creeps behind the smiles and bland Top 40 hits is just hilarious to me. It’s spooky because you can’t be sure it’s never happened.

Also, the movie isn’t particularly scary. While director Kusama sets some amazing mood-establishing shots to begin the scenes, none of the scenes are exactly horrifying. There’s too much humor in Diablo Cody’s dialogue for that, although that’s not at all a bad thing. The most obvious point of comparison to JENNIFER’S BODY, when it comes to tone, is Buffy The Vampire Slayer, which puts it in pretty high company that it maybe doesn’t quite belong in (maybe the movie more than the TV series) – what I’m trying to say, anyway, is that the movie is fun and funny, but it won’t keep anyone from a good night’s sleep.
The cast plays everything right. The relationship between Needy and her boyfriend Chip is sweet and touching, to the point that when he’s put in Jennifer’s sights, you actually are worried for him and are rooting for Needy to save him — a nice inversion of the typical damsel-in-distress nonsense that every other action or horror movie falls back upon. The adults in the movie, though their roles are tiny, are cast well too, from Amy Sedaris as Needy’s mom, to the badass J.K. Simmons playing against type as a sensitive, hilariously curly-haired science teacher. 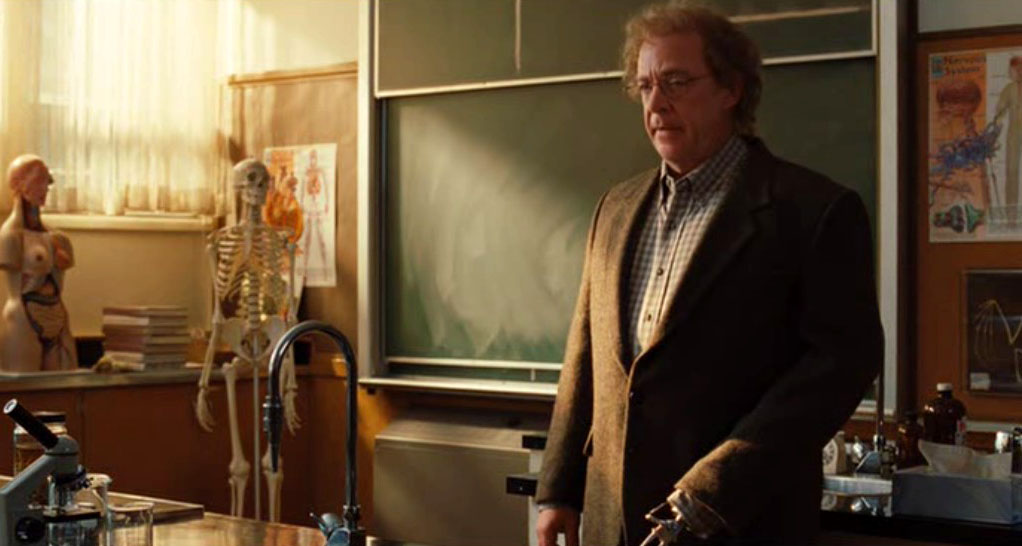 Front and center, though, is Megan Fox, the instant media supernova. I didn’t come at this movie as a Megan Fox fan, but what I think is unfair is sight-unseen criticism of her acting ability: Before this, all we’ve ever seen her in is TRANSFORMERS. Listen, if all you ever saw of John Turturro was TRANSFORMERS, you’d think John Turturro was a crappy actor too.
Unlike many people in America, I saw Megan Fox in JENNIFER’S BODY and I’m here to tell you that Megan Fox CAN act. She’s perfectly cast as the girl who every guy wants badly, but who makes the occasional sensitive guy, like Chip, admit to preferring the less flashy girl. Fox is way more believable as a high school girl here than she was in TRANSFORMERS, which was more of an overly sexually charged adolescent fantasy of a young woman than a real character. Here, she plays entitled, pushy, and still a little immature.  She has chemistry with Seyfried that you believe their years of friendship and the way it rapidly falls apart. She’s adequately convincing as a man-eating monster, and just as convincing in her weaker, more vulnerable moments, as infrequent as they are. If you skipped JENNIFER’S BODY because you have developed some animosity towards Megan Fox (and I’m not even going to bother to get into the Diablo Cody haters, because none of them wrote anything as good as YOUNG ADULT), that’s not really fair. To yourself!
You’re missing a fun, nasty horror flick.