There’s plenty of stories about the rise to fame and what it takes to make it big…but what about that precarious time when the fans stop showing up, the creativity well runs to mud, and those bandmates you thought of as family solely shred on your last nerve? That’s right about where we meet Sonic Grave, a formerly beloved rock band on their way to a low-budget desert music festival. The long hours of a dusty road trip serve as the last chance for Sonic Grave to figure out a way to rediscover relevance while staying true to their spandex-clad selves.

This is also a movie about enormous, murderous ants. This is DEAD ANT.

Stevie, played by musician Leisha Hailey, drives the classic pickup truck that hauls the trailer through the desert. In the cab with her is Art, the bassist (Sean Astin), and their relationship is heavy on brother-sister type banter, which is an instant relief. Right away you realize this isn’t a movie where the guys in the band are going to spend their time trying to fuck the cool girl who plays drums. Guitarist Pager (Rhys Coiro), lead singer Merrick (Jake Busey), his girl Love (Cameron Richardson), and their manager, Danny (Tom Arnold) bicker in the back of the Airstream as Stevie heads to a pit stop at a legendary fruit stand. The band and their cohorts have various degrees of optimism on their journey, but they’re collectively pumped about a planned peyote trip, a mind-altering voyage meant to be part team-building exercise and part creative adrenaline shot. 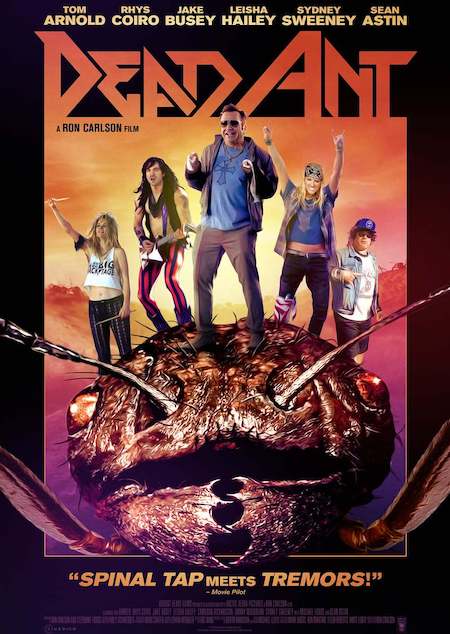 Bigfoot (Michael Horse), the owner of the fruit stand, sells Stevie and Art “The Sun:” peyote with a caveat. They’re to take it on his sacred Native American ground, at sunset, together—but if they harm or destroy anything on that land, they’ll all be cursed until the next sundown. Sure, they’re a little freaked out by Bigfoot and his partner, Firecracker (Danny Woodburn) and their ominous warning, but it’s fine. Everything will be totally fine. Just like every rose has its thorn, every drug trip has its potentially lethal environmental punishment.

While the rest of the band settles in for a night of spiritual enlightenment, Art—having gobbled some Sun early—wanders off, pisses on an ant hill, and unleashes hell. As the ants start their assault on the band, it doesn’t take much insect carnage to realize that with each new death, the size of the next wave of soldiers gets amplified, and they’re quickly dealing with tour bus-sized arthropods. Trapped in their tin can of a trailer, Sonic Grave has to, er, band together to outwit and outrun the hordes.

Even facing death and dismemberment, the Rock On! attitude of Sonic Grave never really wavers. “This shit happens every day in rock and roll,” Danny reminds them, after someone is devoured into a pile of goo. They know that everything rides on getting to the gig, and their teamwork and willingness to do the rough stuff makes you want to raise your lighter for these guys. There’s more humor than horror, but DEAD ANT isn’t without its gnarly moments. 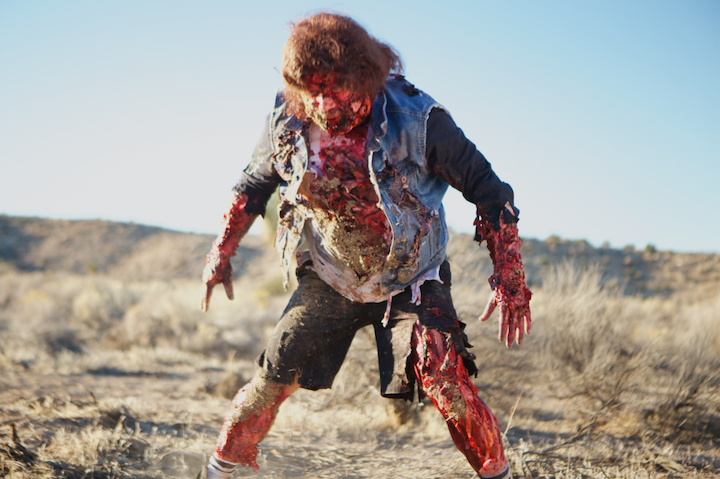 The 1980s hair metal aesthetic and the 1950s radiated insect vibes are a surprising fit, both being so over the top that they complement one another. In their own time, both hair metal and playing off the fears about mutated ants might have stood out as too outrageous, too strange. Now, being so far removed from the (relative) innocence of both eras, the two relics being forced to play in the same desert sandbox of DEAD ANT totally works. Our new vengeful ants end up looking just okay, but the movie sounds absolutely awesome.

DEAD ANT hits the right notes because the cast is pitch perfect. They’re all veterans of genre cinema, and writer/director Ron Carlson’s script lets the ensemble just like, do their thing, man. Astin wears an absolutely unforgivable wig, but he and Hailey are clearly having fun together. Tom Arnold, one of the leaders of the #resist-ance (#resist-ants? I’m sorry.), is the standout. He brings his kinetic energy to Danny, the long-suffering manager. Not only is he screwed out of the peyote trip because no one monitors their portion sizes, but he’s realizing that maybe he’s spent his professional life backing the wrong horse. When Danny assures a couple of groupies, “I’m not creepy, I proved it in court,” moments after using the word “panties”—he’s almost believable! That scummy, happy to take sloppy seconds vibe would be nasty if it weren’t for the affable energy Arnold exudes. He’s like a puppy that can’t stay out of your lap, can’t stop licking your face…can’t stop humping your leg.

While it’s about as silly as it gets, there’s still the gentle message of “respect nature and it’ll respect you.” It’s no THE HAPPENING, but being reminded that you should leave the proverbial campsite in better shape than you found it has never hurt anyone. If you don’t need nothin’ but a good time, DEAD ANT should make your October set list.