A Full Moon video release from 1992, BAD CHANNELS came along about a decade too late for the trends it half-heartedly satirized. With a plot that eventually includes shrinking human beings down to twelve inches tall, a post-credits cameo by Tim Thomerson, and a mostly genial nature when it comes to its comedy, the film falls squarely in line with other Full Moon films of the time—all that it is missing is a far-fetched plot reason to shoot in Charles Band’s Italian castle.

But just because BAD CHANNELS feels dated even by 1992 standards, that does not mean that writer Jackson Barr (working from an idea by Band) and director Ted Nicolaou are unaware of what they are doing. After all, Full Moon films never really chased current trends. Instead, it feels like Nicolaou simply convinced Band to fund an audition reel for directing music videos by promising to include some silliness about an alien taking over a radio station and the aforementioned shrinking of some of the lovely bit players so that the film could be used as a stealth continuation of Full Moon’s DOLLMAN franchise. 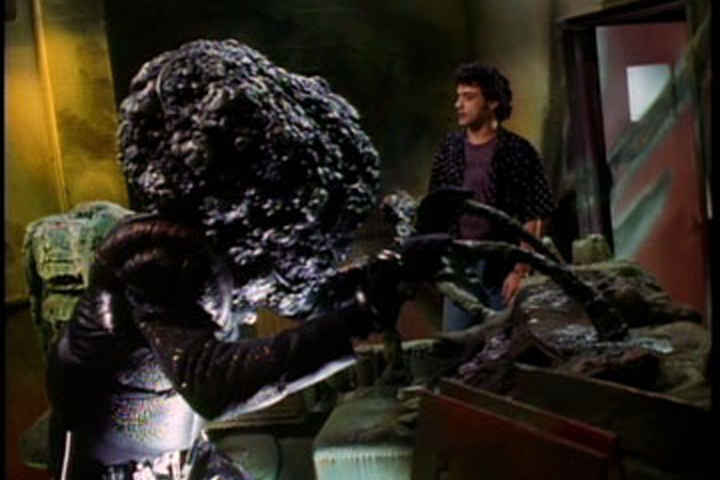 There is a lot of satirical heavy-lifting in the exposition department as Barr’s screenplay gives us nominal protagonists in slightly sleazy shock-jock-with-a-hidden-heart-of-gold “Dangerous” Dan O’Dare (Paul Hipp) and crusading news reporter Lisa Cummings (original MTV VJ Martha Quinn), an alien that looks like a big turd and his robot sidekick, and three different settings for what could be charitably described as vignettes (less charitably as hacky skits). But none of these characters or bits of plot are actually important or the reason the film exists.

Despite this being a Full Moon production, the shrinking of humans is not the focal point of the plot. Instead, the film changes course from its silly “aliens doing strange experiments in a radio station” direction and clumsily inserts three full performances by little-known rock bands that are shot like music videos–making the point of BAD CHANNELS‘ existence abundantly clear. Weirdly, given the fact that classic rock favorite Blue Öyster Cult did the (bluesy, moody, and quite frankly, better than it needs to be) score for the film, they are not one of the bands in the videos. Even though they were well beyond their glory years, were they just too expensive to actually make an appearance? Whatever the case for their on-screen absence, they would have been a welcome presence when compared to the odd collection of uninspiring rock bands that the film settled for. 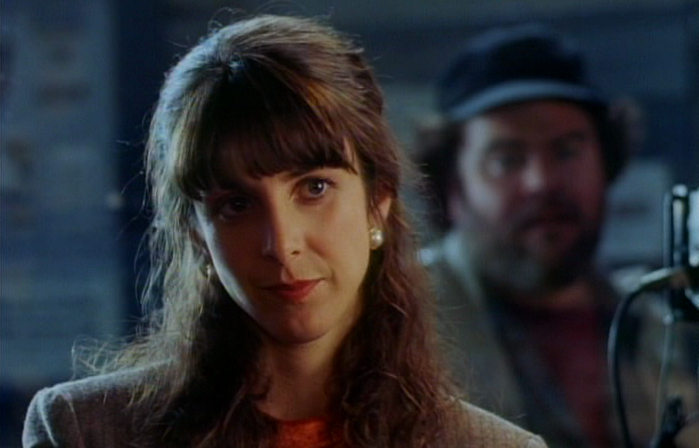 And just who are these bands? None of them seem to have ever broken through to even any cult success, but Nicolaou sure puts a lot of the second half of the film in their hands. If the songs or the performances were good, it would not matter that the bands are unknowns. Unfortunately, it seems like there’s a good reason that this was apparently their biggest moments (I’m sure that each of these bands have their hardcore fans who are penning angry screeds directed at me for my ignorance).

The first band to appear on screen, Fair Game, come off the best with a fairly generic, inoffensively middle-of-the-road hair metal anthem. Their sequence is framed as a fantasy by a waitress at a truck stop diner as she dances on the countertop to their performance and the old men sitting in their booths bang their heads to the music. But Fair Game’s performance also continues the film’s streak of being far behind the times as hair metal and the beautiful-girl-fantasizing-about-her-favorite-band video idea was at least five years beyond their sell-by dates.

DMT, the second band, limps onto the screen with a grunge-like, self-loathing ditty called “Touching Myself Again.” Now, not only does the song’s title come ridiculously close to flat-out copying Divinyls’ “I Touch Myself,” their performance is shot as an uninspired spoof of Nirvana’s classic video for “Smells Like Teen Spirit” which had been released the previous year. Even worse is the actual song: plodding, listless, and embracing the worst traits of what mainstream audiences and critics thought grunge music was supposed to be.

The final performance is by a band called Sykotik Sinfony. Yes, the name is actually spelled like that. And yes, their sound is exactly what you would expect as they seem to be trying to mimic Primus with a mixture of atonal sounds and metal riffs that comes off less as an innovative mixing of genres and techniques and more just annoying noise. The video has the front man of the band dressed as a clown (Was Insane Clown Posse already a thing in 1992?) being wheeled through a hospital on a gurney, so at least the visual aspect is halfway interesting. But musically, this song (titled “Manic Depresso”) is the nadir of the movie, managing to be even worse than DMT’s lackluster track.

Eventually, Nicolaou returns BAD CHANNELS (Side tangent: Shouldn’t it be called BAD STATIONS? It’s radio, not television…but I digress.) back to the plot to sort of wrap it all up in half-hearted fashion that sets up a sequel with DOLLMAN (Thomerson). But the music video sequences are clearly where the interests of everyone involved are focused, so in that regard the film is a letdown. For Nicolaou, this was not to be his De Palma/Frankie Goes to Hollywood moment from BODY DOUBLE; Bruce Springsteen was not ringing him up about his next video. BAD CHANNELS could have used some of the wit, energy, and style that Nicolaou brought to his far superior TERRORVISION. There’s a movie that had fun satirizing pop culture trends—and did so while they were still relatively current.