[PLEASE NOTE: THE LAST OF US IS OVER SIX YEARS OLD, SO PLEASE BE AWARE THERE ARE SPOILERS THROUGHOUT THIS PIECE.]

Click here if you missed part one, American Dreams, on The Last Of Us.

“Let me tell you a story. Once upon a time, I had somebody that I cared about. It was a partner…Somebody I had to look after. And in this world, that sort of shit’s good for one thing—gettin’ ya killed. So you know what I did? I wisened the fuck up. And I realized it’s gotta be just me.”

There is an essential character strand I want to touch back with for a moment—Ellie and Bill’s queerness. Starting first with Bill: other than the fact that he’s a one-scene wonder, Bill is also a sterling example of a gay character who isn’t defined by his queerness. There’s nothing in his mannerisms or dialogue that tell us that Bill is gay, we mostly get brief confirmation through his conversations about the character of Frank, the only other individual that he’s interacted with in the town and whom we find dead at the end of Bill’s segment. It’s sad to see this grumbling individual hit hard with such devastating news as Frank’s suicide, especially the clear resentment that festered in their relationship, where Frank couldn’t get on Bill’s level and vice versa regarding their plans to stay or leave the hellhole in which they found themselves. The true confirmation comes from Ellie rifling through his magazines and finding a gay porn magazine—a minor detail that gives Bill just a little more nuance than paranoid smuggler and it gives The Last Of Us a little more vibrancy in its image of a world after the end. 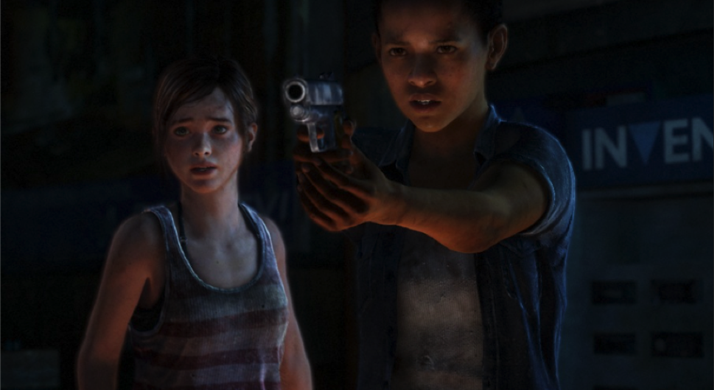 Ellie’s sexuality and identity factor much more in the DLC, “Left Behind,” and its sequel. The audience isn’t explicitly clued in on her queer identity until “Left Behind,” which ostensibly fills in the narrative gaps of Ellie’s attempts to heal Joel after he gets impaled during their excursion to the University of Colorado. In “Left Behind” we see the events surrounding Ellie and her friend Riley (Yaani King) as they parade around the vast ruins of an abandoned mall, whether it be playing in a costume shop or imagining themselves playing an arcade game. This sequence of make-believe really hammers home that despite the apocalypse affecting everyone, there’s still innocence in their hearts. It’s during a water gun fight that Ellie and Riley share an intimate kiss. It’s not played lecherously, but sweetly; a quick kiss between two young people that illustrates that (to Ellie) Riley is more than a friend—she’s a girlfriend. Then, the Infected make their way to Riley and Ellie in the mall and they both get bitten. The two decide that, rather than end their lives immediately, to savor the scant remaining time together. In Riley’s words:

“There are a million ways we should’ve died before today. And a million ways we can die before tomorrow. But we fight…for every second we get to spend with each other. Whether it’s two minutes, or two days…we don’t give that up. I don’t want to give that up. My vote? Let’s just wait it out. You know we can…be all poetic and just lose our minds together.”

Young lovers choosing to die together, that always shatters me. The tragedy is that we know Ellie outlives her love, and retroactively makes the scene where Joel and Ellie argue sting with an unintended irony, Joel telling Ellie that she hasn’t experienced loss. With “Left Behind,” we know that she has; maybe not quite on the same level of Joel, but she still has a hurt that gnaws at her heart all the same. One could argue that the game is deploying the oft-used “bury your gays” trope that all LGBTQIA characters are susceptible to in media. But in Frank and Riley’s case, their partners use that loss to grow as people. It’s not excusable, sure, but it like all things in this world serves a purpose.

“If you find my skeleton, please don’t step on my skull.”

The Last of Us wisely builds its world around the characters. It’s not just the superb visuals of the semi-linear city landscapes, brimming with overgrown foliage and decimated skyscrapers that often lend themselves to strategic stalking or pulse-pounding, close-quarter combat—but how the designers have made the world feel lived in. There are stray letters that Joel finds throughout: letters to and from various loved ones, and parents facing the gut-wrenching struggle of telling their children how to survive if they themselves perish. It’s such a little thing, but mightily impactful. Where this hits the most is during “The Suburbs” portion of the game. 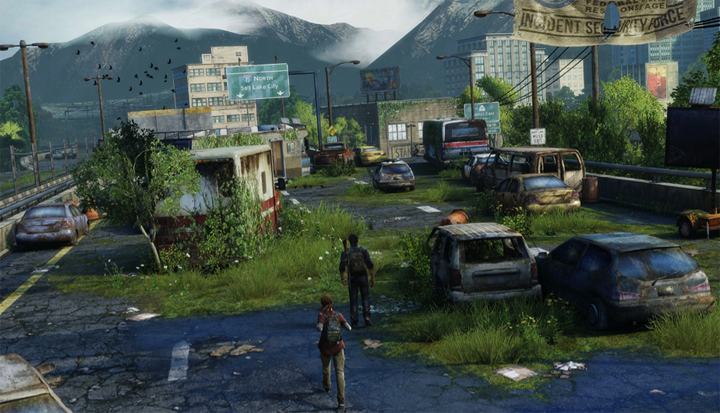 Joel, Ellie, Sam, and Henry are traveling through a sewer. Joel finds notes from a fellow named Ish, whose boat crashed outside a short ways from the sewer entrance. The letters discuss the efforts to set up a thriving, but now destroyed, community that Joel can slowly discover as they progress through the murky area. Again, it’s such a simple thing but something that most writers wouldn’t think to add in a game. And since this backstory requires the player to pick up these stray notes, the dreams and intentions of a newly discovered and abandoned place is entirely missable. But think about how many times you’ve walked through a part of a city or a town or any location and just happened to be wandering through the decimated dreams and forgotten lives of all that have passed through there before you. There’s one room in the sewers that demolishes the spirit, filled with skeletons (three small ones and an adult) and a letter mentioning that they can hear Infected beating at the door and that, if the time came, they would make it quick. Then, to add the soul-crushing topper to this cake, scrawled in chalk on the wall: “they didn’t suffer.”

“Those things out there. What if the people are still inside? What if they’re trapped in there, without any control of their body? I’m scared of that happening to me.”

As for the antagonists, The Last Of Us offers up a varied batch of baddies to keep things from feeling too stagnant. I love the biological nature of the Infected, giving us a different take on the usual, vague “zombies versus humans.” The game plainly lays out the makeup of the Infected—Cordyceps, a parasitic fungus, through a narrated opening credits montage and then lets the player catch up when the writers introduce the Infected’s various mutated forms as the game progresses, like the Bloaters (a close encounter with these monsters will result in getting your jaw ripped off) or the Clickers (infected that hunt you down via echolocation—which lends itself to some great, tense set-pieces). 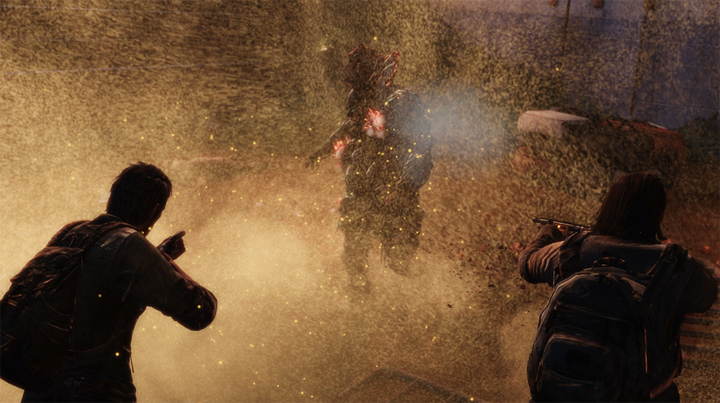 As for the scavengers, who make up one-third of the combatants you’ll face in game, they’ve got colorful personalities. Listening to their chatter as you outrun them in Pittsburgh, they talk openly about the prey they’re chasing. There’s a conversation about some random woman , a “tourist,” who they eventually catch up to and kill (the entire conversation is crudely savage), the food they’ve managed to get their hands on, (the way they toy with each other about their food supplies is deft in its cruelty). The government mooks are the faceless villains of the piece, mostly serving as the tyrannical opposition our heroes face from the time the game yells go, so they’re not really as interesting, sadly. What’s interesting though is how the game shifts the Fireflies from mythic heroes to people who will kill Ellie to serve a greater purpose (removing her brain to synthesize a cure). I don’t believe this antagonizes them, nor do I believe the game thinks that as well, but what’s most interesting is how the game makes you think that they’re the antagonists. 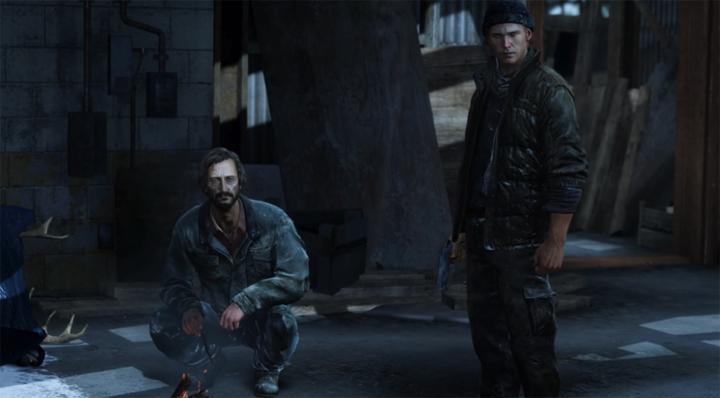 Similarly, this is mostly how the game treats the lecherous, cannibalistic David during the game’s latter, winter chapter. We know that David doesn’t pass the smell test from the moment he’s introduced, and that’s not even factoring in the unseemly, untoward “affection” he seems to have toward Ellie. But the game ensures that you at least understand what his tribe is trying to do. They’re trying to survive, as bloodthirsty as their attempts are. It doesn’t ask you to agree with them, but just know that they think their way is the right way. It’s food for thought.

Tune in Friday for the conclusion of The Legacy of The Last Of Us.