My husband hates Pia Zadora. Like, hates her with a passion normally reserved for anti-vaxxers or Rob Schneider vehicles. So I started watching VOYAGE OF THE ROCK ALIENS, which stars Pia, without him, thinking he wouldn’t be home for a while.

He came in towards the end of the film, just as Criag Sheffer was beginning his “Nature of the Beast” number, a spectacle of beefcake, interpretive dance, and big cats so jaw-dropping in its forced sexiness that it must be seen to be believed. Here, you can see it yourself here.

“I don’t know what this is, but I love it,” he proclaimed. And it’s hard to disagree. Afterwards, the movie went on as expected until the opening notes of a new song began.

“Wait. What is this? I recognize this.” Realization, then shock, then horror, began to come over my husband’s face. “Is this… THAT SONG?”

It was, indeed, THAT SONG. The song that I’d included on a mix CD or two in our car, which he’d been unwitting exposed to on several occasions. It was the Pia Zadora-Jermaine Jackson duet “When the Rain Begins to Fall.”

“I take back everything I said about the Nature of the Beast song,” he added once the shock had passed.

We’re still together, but it was a tense couple of days.

Pia Zadora is one of cinema history’s greatest sidebars. A child actress who appeared in SANTA CLAUS CONQUERS THE MARTIANS in 1964, she re-emerged in the early ‘80s as the lead in the batshit melodrama BUTTERFLY, for which she won a Golden Globe, allegedly “purchased” by her then-husband. She followed this up with the batshit melodrama FAKE-OUT and the batshit melodrama THE LONELY LADY, both of which solidified her standing as an actress with, well, let’s be generous and say a unique career.

So what does Ms. Zadora follow up a trio of batshit melodramas with? Why, she returns to her sci-fi musical comedy roots, of course, in a beach party-rock’n’roll-alien invasion-chainsaw maniac monstrosity called VOYAGE OF THE ROCK ALIENS. 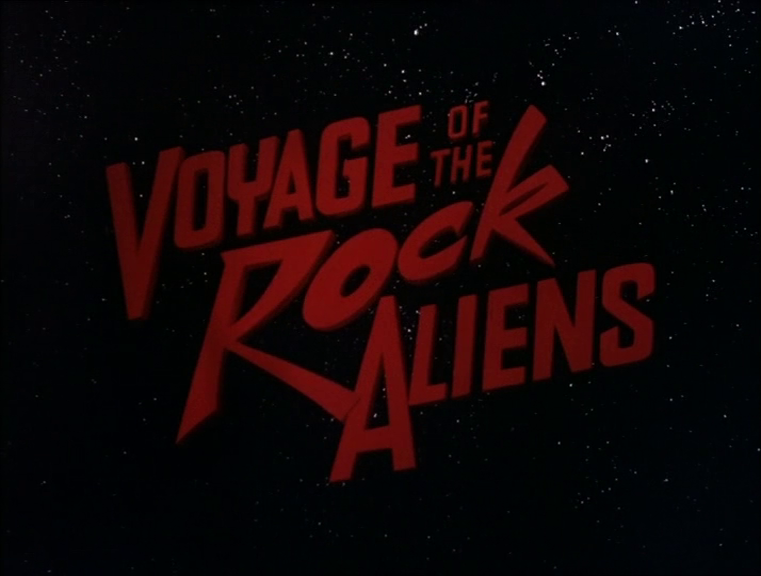 Allegedly VOYAGE OF THE ROCK ALIENS wasn’t originally conceived as a musical. In the original script by James Guidotti, the concept was much more akin to a more narratively-structured version of AMAZON WOMEN ON THE MOON, with characters going though different film genres that you’d find on late-night television. However, the script was purchased, the producers decided it would be a great musical, Pia Zadora was attached, they hired James Fargo, who had helmed the zany Clint Eastwood masterpiece THE ENFORCER and the similarly wacky Chuck Norris film FORCED VENGEANCE, to direct, and magic was made.

See, VOYAGE OF THE ROCK ALIENS took four and half years between its initial Atlanta filming in 1983 until it finally graced video store shelves in the United States in 1988, and by then, Pia-mania had subsided. (The reasons behind the delay aren’t completely clear, though some cast members suspect it may have had to do with Pia’s husband not thinking it was good for her image.) VOYAGE got dumped to unwitting consumers by Prism Entertainment, unloved by the foolish American public for decades to come.  The film fared a little bit better in Germany, where it had a two-disc special edition bestowed upon it. Zadora had also made an appearance in FEEL THE MOTION (DER FORMEL EINS FILM), a rock comedy based on a popular German TV series. 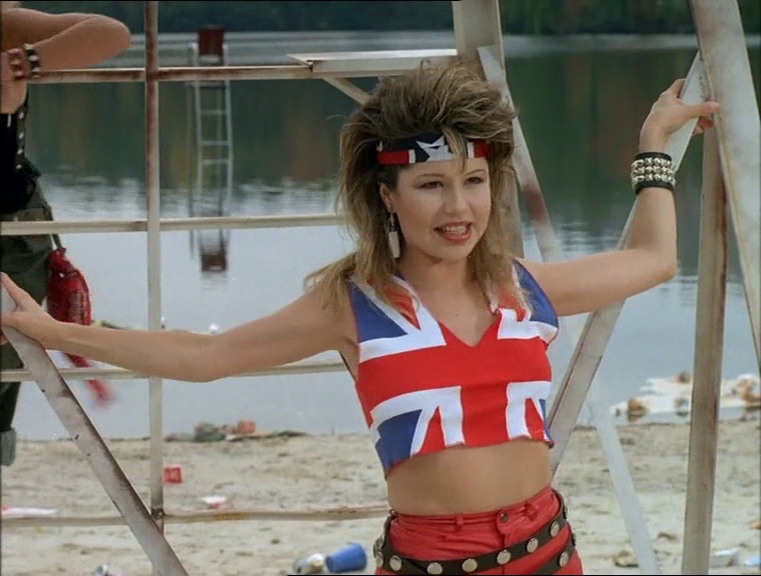 It figures that the Germans would understand the accidental day-glo monstrosity that is VOYAGE OF THE ROCK ALIENS more than the United States. We just weren’t ready for it. Some would say we aren’t meant to be. They’re likely correct.

VOYAGE starts out simply enough with a movie of its title, on board a space ship as the computer searches for planets to explore. It stumbles on a post-apocalyptic-looking landscape, where it watches the entire music video for Pia Zadora/Jermaine Jackson’s Billboard-charting hit (#22!) “When the Rain Begins to Fall.” This is never referenced again.

(The reasons for this are because the video was never meant to be included, and was shot after the film was completed. But when the song became a hit, they decided to throw it in, despite the fact that the song is later sung again in the film in its entirety, this time by Zadora as a different character and NIGHTBREED’s Craig Sheffer lip-syncing to Jackson. It’s like the Philip Michael Thomas music video in the middle of DEATH DRUG, but with double Pia Zadora and less sweat.) 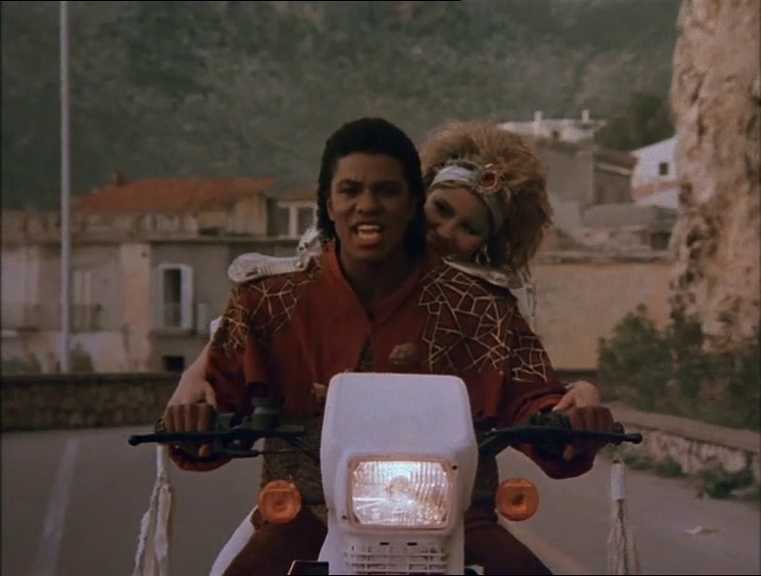 We then get to our aliens, a group of identically-dressed young fellows with names based on parts of the alphabet who, after being decompressed by the ship’s robot, launch into a very Devo-esque musical number. Most of the crew is played by the band Rhema, a group that seems to have existed to solely mimic the musical zeitgeist of the era, and the 1983’s era’s zeitgeist was apparently Devo. I’d like to come up with something clever here beyond “Man, they’re basically Devo” because every write-up of VOYAGE OF THE ROCK ALIENS mentions this, but man, they’re basically Devo.  Only not Devo. 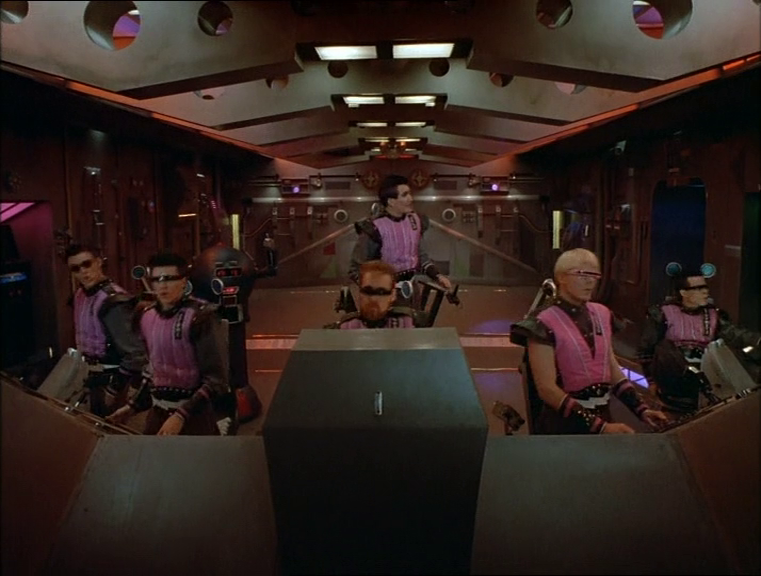 The leader of the aliens is played by Tom Nolan, a former child actor (KISS ME STUPID, “Lassie”) who was now juggling a music journalism career with roles in films like UP THE CREEK.  He would later write a nifty biography of crime writer Ross McDonald. He probably doesn’t mention this much.

Anyway, the aliens decide on hitting Earth, where they get names based on snippets of the alphabet and the robot turns into a fire hydrant. Here they meet Dee Dee (Zadora) and her tough guy love interest Frankie (Sheffer), who leads a band called “The Pack,” played by Jimmy & the Mustangs, who are basically if they’d cast the Stray Cats as the punks in CLASS OF 1984. Musical numbers are performed, including “You Bring Out the Lover in Me,” Dee Dee’s peppy ode to co-dependent, abusive relationships set in the women’s bathroom where each stall door is lined with a photo of Frankie. 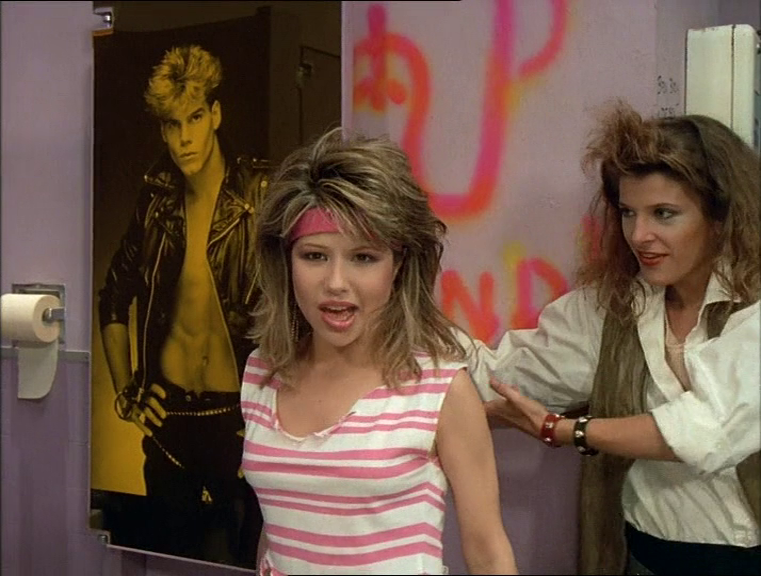 The leader of the aliens, ABCD, falls for Dee Dee, and she’s torn between the weird alien guy and the surly abusive guy that doesn’t let her sing. On the other hand, Frankie does have the aforementioned musical number, “Nature of the Beast,” an amazing spectacle of ‘80s sexography which shows Craig Sheffer’s commitment to the art of faux-sexiness in spades. If Sheffer had used his own voice (it’s not, it’s the voice of Michael Bradley of Paul Revere and the Raiders), this could have been put on a cassingle with his image and sold out at every Sam Goody in the nation.

Meanwhile, a local, er, army sheriff (it’s a little vague) played by Ruth Gordon (!) skulks around, trying to prove that the aliens exist, and gives the film a few intentional laughs. Alison LaPlaca, a good actress in subtly comic roles, tries her hardest to figure out what to do with the best friend role in a broad, ridiculous comedy.  Oh, and Michael Berryman shows up as an escaped mental patient with a chainsaw that starts killing everyone. 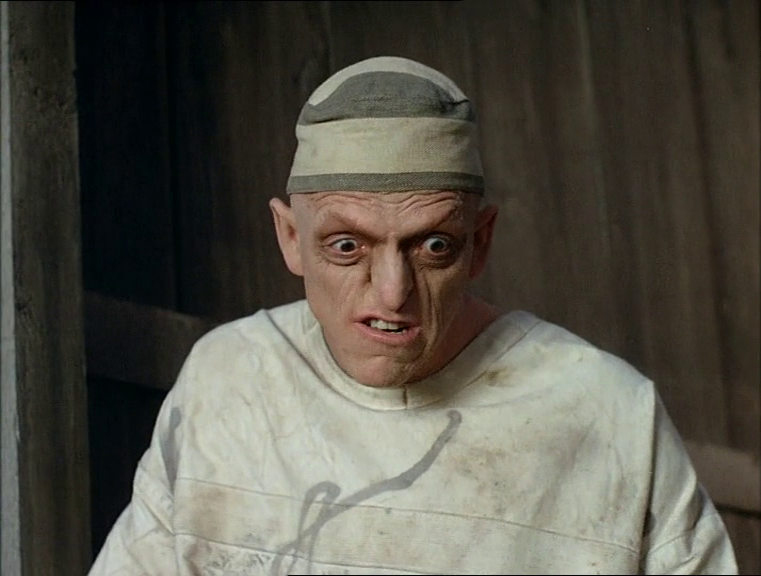 Did I mention the giant-tentacled creature that lives in the sea? No matter, the movie doesn’t for the most part either, until the very end. It attacks people.

VOYAGE OF THE ROCK ALIENS is the sort of film that shouldn’t realistically exist. It’s less a product of the ‘80s than the product of an alien species that decided to make an “’80s movie” based on watching THE APPLE, a random New World picture from the late ‘70s and the entire run of “Square Pegs.” It’s a mishmash of “stuff going on” more than an actual movie, and while it probably just came off as confusing and off-putting to those who dared to rent it in 1988, three decades has turned it into a fascinating time capsule of bizarre cinematic behavior that could only have been done with the sincerity it has in 1983. Like a fine wine or a dead dinosaur, it’s gotten more useful with age. 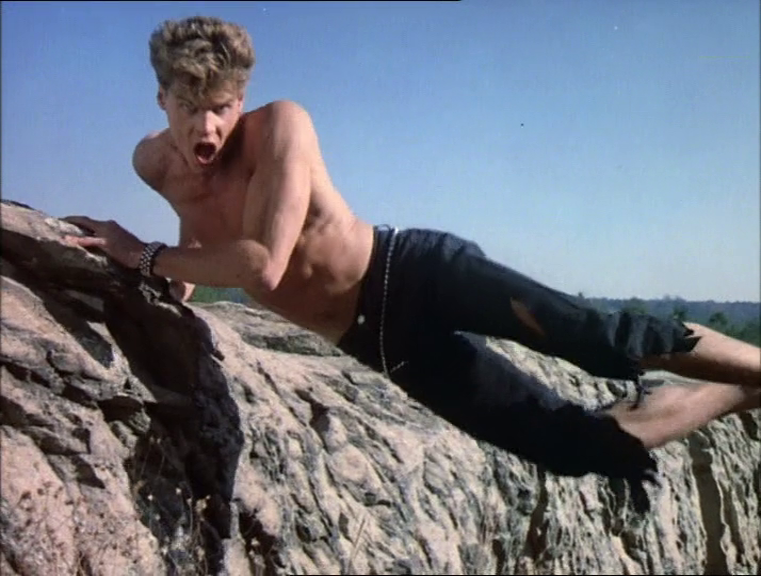 The biggest issue with VOYAGE is that the first half is so much more entertaining than the second, which is odd, as the second half is where things really get bonkers. The problem is that the frequent (and pretty good!) musical numbers drop off, and outside of “Nature of the Beast,” the final third’s music consists of “When the Rain Begins to Fall” (again) and an uninspired band duel that seems to have been cribbed from XANADU. (THE APPLE has similar problems, but the double-whammy of “Speed” and “Coming” along with the insane sincerity of the climax make up for it.) If the second half measured up to the unbridled, but occasionally organized, glee of the first, maybe VOYAGE OF THE ROCK ALIENS would have been playing midnight shows for years. 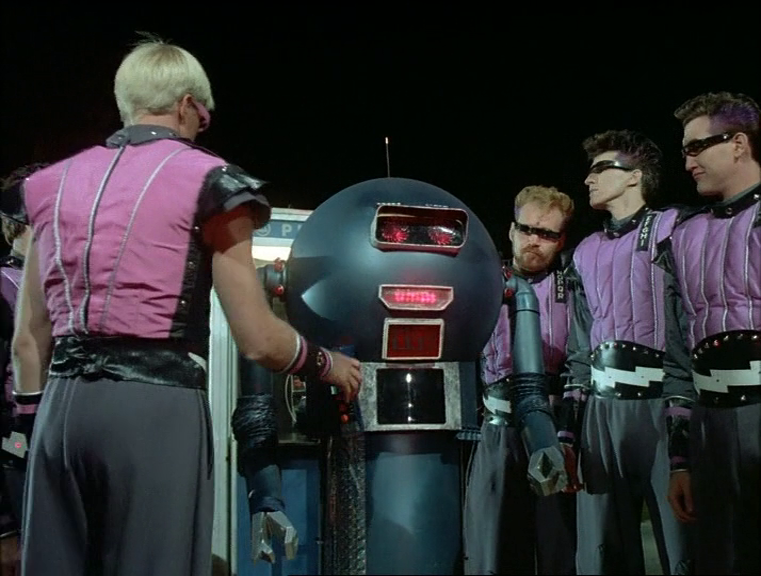