If there’s one thing that sticks in my craw about the very solid second episode of American Horror Story: 1984, it’s the pointlessly exploitative inclusion of Richard Ramirez–The Night Stalker. If you’re trying to have audiences have a blast with a slasher throwback, throwing in a very real killer who once cut the flesh and spilled the blood of actual victims runs the risk of ruining someone’s good viewing time. The showrunners could have any fictional killer stalking Brooke through the forests of Camp Redwood, especially given her horrendously tragic backstory that we learned in this episode (more on that in a moment). The show already has its own exploitative moments built into its foundation, with shots of soaped up men showering or girl on girl kissing. You don’t need a notorious real-world killer to spice things up. Begrudgingly, I will admit that Ramirez’s inclusion as a character in the events serves a purpose towards fulfilling the greater message of the episode–that men are monsters…and sometimes they make monsters, too.

Throughout “Mr. Jingles,” there are three separate incidents in which we see the toxicity and cruelty that men can commit. First, with the aforementioned Ramirez, the show wants to give this irredeemable monster some semblance of sympathy. Oh, his mother breathes in toxic chemicals while pregnant with him. He got hit in the head and suffered from seizures. His cousin, a former Vietnam vet, showed him pictures of women he killed in ‘Nam and then blows his wife’s brains right in front of Lil’ Ricky. This is meant for us to think “even gleeful Satanic killers have hurt in their hearts too!” But it doesn’t work, though it is seemingly accurate to the real-life psychopath’s vile deeds. I was hoping that he’d be in and out within two episodes, but considering the pact he takes up with Margaret at the episode’s end (to protect everyone from Mr. Jingles), it’s clear we’re stuck with him for the time being. I hope his continued inclusion has a drive and purpose for the plot.

Sympathy is something I can easily conjure for the other two characters, Xander and Brooke, whose traumatic backstories are delved into this week. First, there’s Xander, whose trauma isn’t as violent so much as it’s vile in its all too real portrait of how rich men will hold sway over young, narcotically addled males. The repugnancy isn’t so much in the execution (although there is that “edgy” campy trademark Ryan Murphy dialogue) but in the reflection of real-life. Last episode, Xander got a threatening phone call while en route to Camp Redwood and now we see the voice responsible for the call–Blake, Xander’s former agent, who found the young man strung out and is trying to keep him locked into a life of shooting gay pornography and threatening to make his shame public amongst his friends, employers, and family. Fortunately for Xander though, Blake gets killed, his eye getting stabbed with a spike in a bad case of eyeball trauma that will make Lucio Fulci proud, whilst he peeps on Trevor’s pecker. 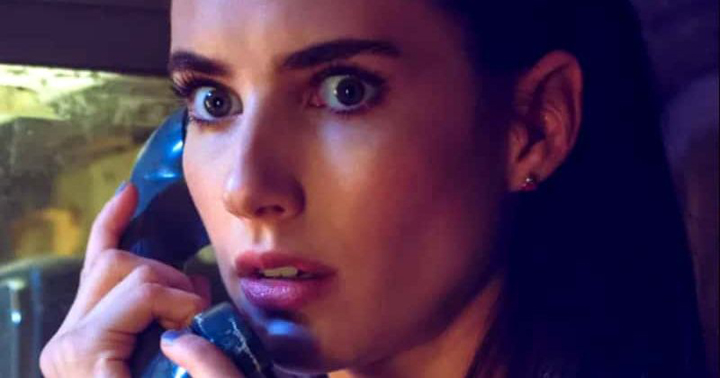 Brooke’s backstory is filled with the male toxicity that modern social media constantly exposes. On her wedding day, her fiancé, Joe, thinks she spent the night before their unholy matrimony cheating with one of his groomsmen, and proceeds to kill the presumed cheater, her father, and himself after blaming her for the chaos he caused (“look, what you made me do,” which is your typical, abusive, and ruinous masculine behavior). So, not only is she carrying the weight of running from one distressing event in her life, she’s become the target of another notorious killer. As I mentioned before, this could have been handled differently—let’s say instead of Ramirez hunting her down, it could’ve been a family member of Joe’s, blaming her for his death which falls closer in line with how slasher films use psychotic breaks in their killers for their trigger—and give things a cyclical nature. Nonetheless, it provides Brooke and therefore Emma Roberts, a tormented platter of emotions to experience.

For an episode named after its titular madman, we hardly see any of him throughout the episode. There’s the extremely tense cold open kill where he nastily picks off the psychiatrist, Dr. Hopple, that was pursuing him after his asylum breakout in the previous episode—which caught me off guard, because I surely thought she’d stick around for at least a couple of episodes and fulfill a Dr. Loomis-type role. For all the backstory we get regarding our other characters, there’s no insight to his murderous rage. Not that there always needs to be, though, but over the course of a ten-episode season, and with someone as commanding as John Carroll Lynch in the role, there has to be some meat to the madness. The slasher stuff still works like aces, from a gruesome disemboweling to silt throats to juicy ear and eye trauma. The show has great nighttime atmosphere, having Margaret cut the lights halfway through the episode (what was that all about?) makes things nice and comfy for a killing spree. Coupling that with the plinky, synth stingers gives me the continuing feeling that they respect the slasher sub-genre. And if they throw in some heavy-breathing POV shots, I’ll be in nightmare nirvana. Additionally, Billie Lourd continues to be the MVP for the season what with her to trying to make Brooke’s tragedy comparable to the time she got groped outside of a Sam Goody. Her droll performance os always welcome. Also, Matthew Morrison’s himbo is a wonderful highlight. Let’s make his stuff less penile-focused though. He’s no Eddie Adams from Torrance. 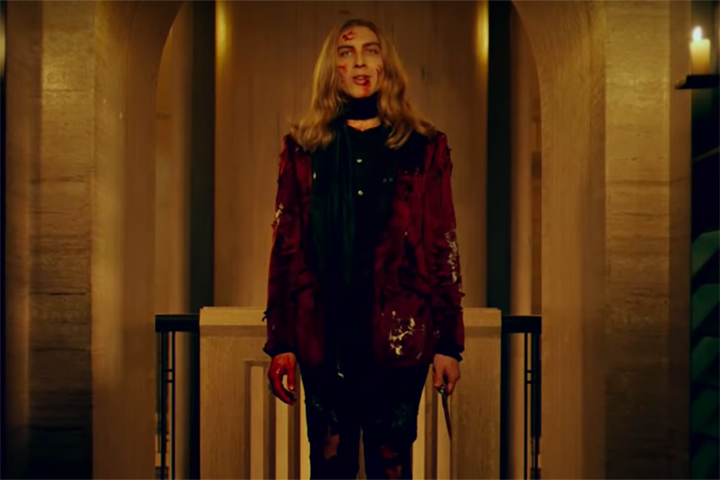 I’ve got a theory (it could be bunnies) about the hack and slash events we see unfurling before our very eyes. Based upon the way that the characters act like very clear clichés out of ’80s sex comedies and slashers, I feel like either it’s some sort of film that we’re watching a la THE FINAL GIRLS or these are characters who have wondered into some sort of Camp Redwood/GROUNDHOG DAY death echo that we’re watching play out—which could have been made abundantly clear when we discover that the hitchhiker (played by genre stalwart, Lou Taylor Pucci) was actually a cowardly camp counselor who was slain during the Mr. Jingles bloodbath years earlier and is now back and saying things like “this isn’t how I die.” Of course, it could all be straightforward somehow. But any way it shakes loose, I’m happy to be along for the ride, especially now that the starter gun has been fired and the counselors know there are killers on the loose and aiming for their heads.