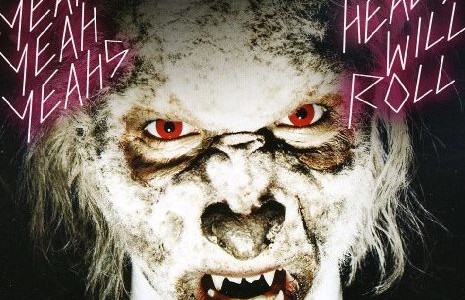 The Yeah Yeah Yeahs have had a fascinating career since the three piece band formed in New York City in 2000. They’ve transformed from garage style punk type into more electronic and experimental forms along with traditional rock songs and a mix of different ethereal sounds as well. Karen O, Nick Zinner, and Brian Chase have also always brought a visual flourish to their endeavors—whether it’s an impressive stage show, or chic fashion statements, or fairly inventive music videos. For the single “Heads Will Roll,” from the 2009 album It’s Blitz!, the band brought in comedian/writer/actor/director Richard Ayoade to make their music video.

Ayoade is no stranger to genre work—he co-created/wrote/acted on Garth Marenghi’s Darkplace, worked in multiple capacities on The Mighty Boosh, wrote and directed THE DOUBLE, provided a vocal performance for THE BOXTROLLS, and acted in the ill-timed and not very good (except for him) 2012 alien invasion comedy, THE WATCH. With all of that experience and genre knowledge, Ayoade brings a pretty dope scenario to match the rollicking Yeah Yeah Yeahs song. A special performer dances for a select crowd in a hidden location…but eventually his secret is revealed and things turn ugly albeit in fabulous, glittery fashion. It’s a mixture of lo-fi and imagination, along with spectacular lighting and framing, all to a song that will have listeners bopping in their seats.