When I think of a movie that rocks, I think of DEATHGASM. Another great New Zealand horror comedy, the film was executive produced by Ant Timpson (COME TO DADDY) and directed by Jason Lei Howden (GUNS AKIMBO). Deathgasm shines most in its soundtrack and practical effects. It has a great double disc soundtrack—featuring the likes of Beastwars, Bulletbelt, Nunslaughter, and Elm Street—paired with a deluge of crimson carnage.

Brodie (Milo Cawthorne), is a struggling teen metalhead who just got displaced to live with his uncle after his mom goes on a meth bender. It is clear from the onset that Brodie is an outcast amongst his non-nuclear, Jesus-loving extended family. Brodie finds solace in creating his own dark kingdom within his room by plastering the walls with Cannibal Corpse and Trivium posters whilst he listens to heavy metal CDs and plays guitar.

The film does a great job of portraying a metalhead dropped in a foreign environment. Brodie manages to find his niche by assembling the titular band with Zakk (James Joshua Blake), Dion (Sam Berkley), and Giles (Daniel Cresswell). There’s some hilarious moments like the behind the scenes filming for their music video, “Intestinal Bungy Jump,” where the bogans are in white facepaint and full regalia on what looks to be the Kiwi version of the set of THE BLAIR WITCH PROJECT and is a parody of such no-budget affairs like the infamous music video by The Black Satans.

An unfortunate series of events leads the motley crew to come into the possession of an ancient piece of sheet music. The band practices the relic composition and it conjures up apocalyptic demons summoned by the guitar chords of the Black Hymns. Suddenly, the town is loaded with demonic zombies eager to convert the living into viscera. This is where the movie really begins to shine as writer/director Howden cut his teeth working for Peter Jackson and his prowess for practical effects are on full display. As we were reminded later with MANDY, nothing goes better than thumping metal beneath the whirring of a chainsaw. I won’t spoil them here but DEATHGASM packs a bevy of ultra creative deaths while managing to not look low budget.

DEATHGASM is a great time that draws inspiration from EVIL DEAD, SHAUN OF THE DEAD, and HEAVY METAL. It takes a Flight of The Conchords-like tone of comedy and juxtaposes with some gratuitously gory death scenes and thumping anthems like Elm Street’s “Heavy Metal Power” to make it a metalhead’s dream come true.

As Brodie sagely explains to Medina (Kimberley Crossman), a popular girl turned metalhead demonslayer: “It’s like when life sucks and you feel alone and empty. You stick on some metal and life is better because somebody else knows the pain and rage that you’re going through.” 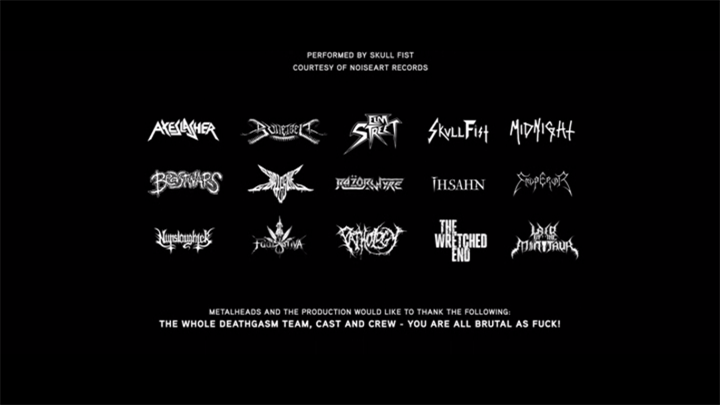 It checks all those boxes and manages to be pretty funny to boot. Throw on a studded leather jacket and DEATHGASM for a rocking good time.