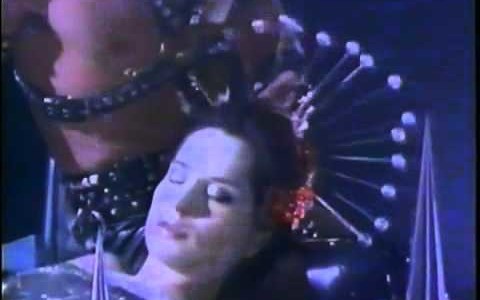 Nope, it’s not the Celine Dion version. Though that music video does feature a ghost…kinda…so it would’ve been thematically appropriate. Written by famed music virtuoso, motorcycle lifestyle fan, and sunglasses enthusiast Jim Steinman, “It’s All Coming Back To Me Now” was most famously covered by Dion in 1996, though it has been done by others such as Meat Loaf in 2006, used in Steinman’s Bat Out Of Hell: The Musical stage production, and is featured in an incredible sequence in the 2018 New Zealand comedy, THE BREAKER UPPERERS.

But none of those are what is being featured in today’s Mourning Jams. No, this is all about the OG recording by Steinman’s female vocal group Pandora’s Box done in 1989. Steinman utilized singers and musicians he had worked with previously on a bunch of different projects—including as Fire, Inc. for STREETS OF FIRE—and brought them together for one album that is pretty insane in a delightful way, or, as one critic put it at the time: “excruciatingly operatic.”

A lot of the songs (or at least parts of them) on that album would later be reused with other artists with whom Steinman worked, like Ms. Dion and Mr. Loaf. But there’s a rawness and scrappy element to this recording that makes it work so well as it seems like something put out by a couple of crazy kids with a dream. The lyrics and music are still over the top, but when coupled with the music video directed by Ken Russell (THE DEVILS, CRIMES OF PASSION, THE LAIR OF THE WHITE WORM, TOMMY), it enters that fantastic world of melodramatic stakes, otherworldly bikers, reanimation cults, and graveyard parties. In other words…it’s incredible and needs to be witnessed if it hasn’t been seen already.