There are many storylines that have been brought up so many times over the years that they morph into tropes that are usually tedious to sit through for the umpteenth time. An assassin that falls in love with his target. Time travel that seeks to fix the future by changing the past. Unlikely romance striking up in unexpected places. These are all loglines that have been explored endlessly already in TV, movies, books, comics, video games, and more—sometimes with impressive results and sometimes leading to not much more than groans and eyerolls. But what if all of those tropes were combined into one plot like a bizarre chimera of sci-fi romcom? The result would be SAME BOAT, a new independent film from co-writer/director/star Chris Roberti in which a time traveling assassin stalks his prey on a cruise ship while gradually falling love with her and out of love with his given task. SAME BOAT boasts a lot of inventiveness in both its story and its production, but is undercut by a few missteps that rob it of being as excellent as it could have been. 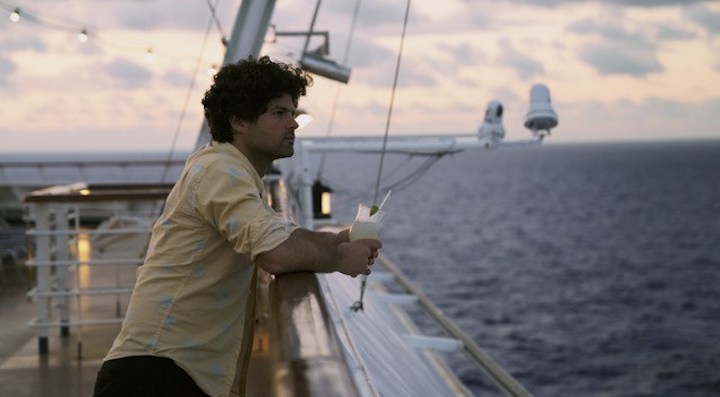 James (Roberti) and Mot (Julia Schonberg) are time travelers from the 29th century sent back in time to eliminate various people that eventually lead to the hellscape the world will become. Mot is still learning the ropes from detached veteran James, but they remain committed to their missions. On a cruise ship, Lilly (Tonya Glanz) has recently broken up with her boyfriend, Rob (Evan Kaufman), and is trying to enjoy all the spoils the ocean liner has to offer. As Mot is incapacitated by seasickness, it’s up to James to track down their target and take her out at the proper time to fix the timestream—or fall in love with his mark and find himself amidst a moral quandary and endless buffets. 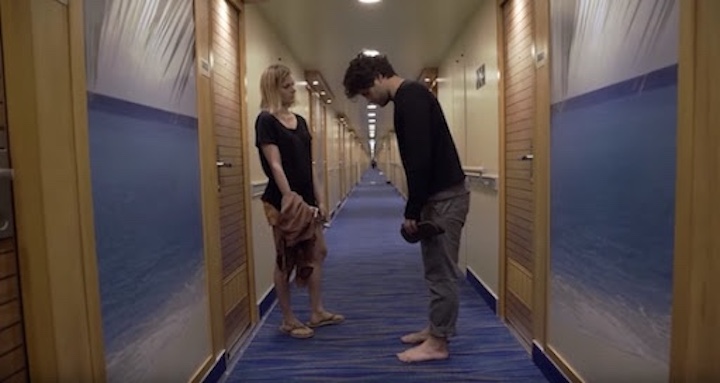 While it’s not announced in the film until after the screen fades to black, it should be noted that SAME BOAT was shot guerilla-style on a real cruise. This is brought up in all sorts of marketing elements for the movie, but it’s a subtle gimmick that doesn’t overtake the narrative or really make itself known in too many ways during the brief 83-minute runtime. Similar to ESCAPE FROM TOMORROW, the tiny cast and crew secretly filmed scenes while just hanging out on the ship (and whenever they stopped in various ports)—getting a bunch of production value imagery and clever use of setting that adds to the quirky sense of it all. In terms of SAME BOAT‘s narrative, a secret mission is taking place among people who are none-the-wiser about this time traveler infiltrating their ranks during conga lines and lido deck shenanigans. But, in real life, a secret mission was taking place among people who were none-the-wiser about this film crew making their oddball genre mix-’em-up. It’s clever mirroring that adds charm and some metatextual levels to the events. 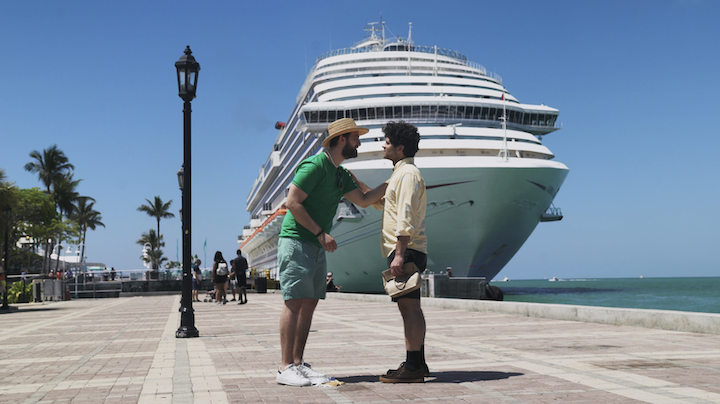 SAME BOAT starts off incredibly strong back-to-back-to-back bits that all land spectacularly well. There’s a great joke in the text preface of the film, strong humor and worldbuilding in the opening scene where James and Mot dispatch the inventors of Reality TV, and then in the scene between Lilly and Rob that is pretty sublime. There are a ton of great moments throughout the movie which manages to mix the absolutely absurd and high concept with completely mundane and non-plussed attitude. Kaufman, Glanz, Schonberg all shine in their roles and do a lot to broaden the tones of scenes to make them feel populated by relatable people who are slightly elevated versions of real folks.

Another great addition to the film is Jeff Seal as Gary, a member of the cruise staff that is constantly trying out magic tricks, despite not being a magician, and delivers some of the best lines in SAME BOAT. There are a ton of great exchanges and scenes between characters that subvert expectations or go off in unexpectedly bizarre tangents that are truly funny and wonderfully inspired (there’s an excellent breakfast scene towards the end that is perfectly executed and hilarious).

Unfortunately, there are some shortcomings in SAME BOAT that detract from it being a great under-the-radar indie. For one thing, Seal’s Gary is introduced along with two other members of staff (Katie Hartman and David Carl) who are mostly in the film for diverting comic relief that feels more like filler. They have some good banter and funny moments, but it feels like added schtick to pad out the time or move away from the same two characters for a bit. It’s akin to the awkwardly inserted comic relief cops in both LASERBLAST and HALLOWEEN 5 that don’t quite match the tone of the rest of the film, and if they were excised it wouldn’t change SAME BOAT at all. That’s not due to the actors, who commit to their bizarre characters and play them well; it’s just a lack of cohesion of narrative.

Which brings up another issue (or set of issues) within SAME BOAT that takes away a lot of the fun—even though it’s a scant (compared to bloated blockbusters these days) 83-minutes, it feels like there’s too much filler and not enough substance. There isn’t enough done to set up that James is either truly devoted to his time traveling hitman life or that he’s been questioning it as of late; it’s one brief exchange with Mot in the very beginning and then meeting Lilly throws the character into a land of confusion. 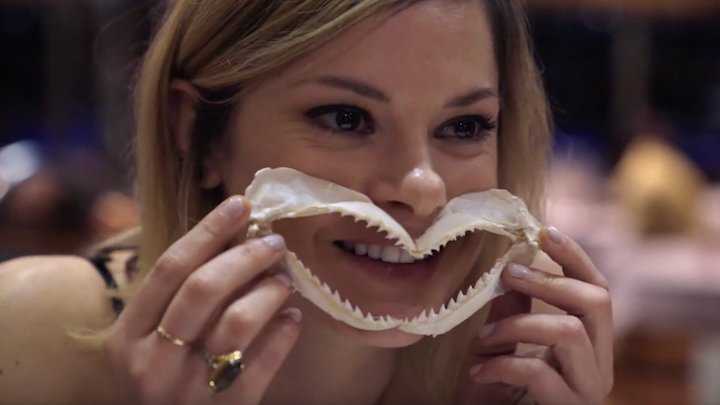 Lilly herself isn’t really developed as a character—Glanz plays her perfectly as wry, smart, funny, independent, a bit cold and weird but clearly that’s more of a wounded element to the personality. But there’s nothing about her backstory, her wants/dreams, or even any real resolution with her and Rob in any way. If these characters had been fleshed out a bit more in the script by Roberti and his co-writers (Mark Leidner and Josh Itzkowitz), then it would make the emotional stakes more engaging and thus the resolutions more rewarding.

Instead, far too much time is given to music montages—with multiple occurring in SAME BOAT, often times (at least towards the end) with only 90-120 seconds of a scene of dialogue separating them. The only other movie I can think of that is that short with the many music montages with so little substance in between each one is TEEN WOLF TOO—and we all know you don’t want to be like TEEN WOLF TOO.

It’s probable that this may be due to the restrictions of the production—lack of being able to record a scene properly due to other passengers or rushing to capture everything in the very limited span of the cruise itself, or needing to convey a lot of emotional information in a short amount of time without too much audio or intrusive set-up for shots that would annoy the other people on the boat. It’s unknown the reasoning, but it becomes a very distracting detriment as the film races to its finish. 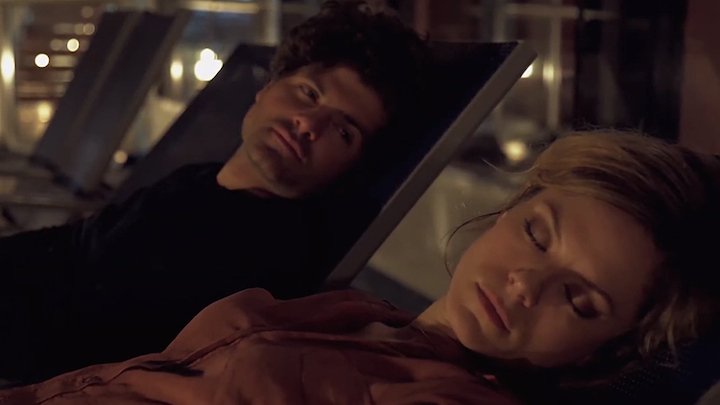 I’ve never been on a cruise—I can only base what I know about them from movies, TV shows, and more-than-slightly pretentious but still pretty great David Foster Wallace essays. But they seem like a great conundrum of oxymorons: an abundance of activities, but a limit amount of space; traveling afar but staying within the same confines; seeing new places but with all of the same people every day. That’s what makes this ocean liner such a great setting for SAME BOAT, a film that traffics in combining various clashing feelings and genres and tropes to produce something truly novel. It is marred by some missteps in writing and execution (that may or may not be connected to the manner in which it was made), but there is still a lot of impressive talent on display that shows a lot of promise for the cast and crew in their future endeavors. SAME BOAT is flawed and could have been great, but it will just have to settle for being truly unique and fairly entertaining.

[SAME BOAT is now available On Demand, including iTunes, from Dark Star Pictures] 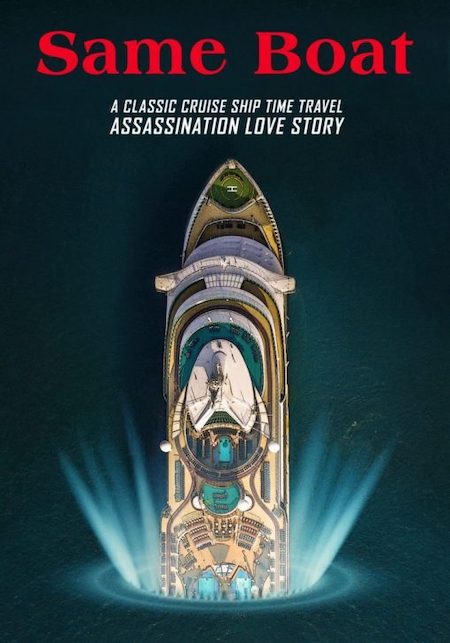