I love genre cinema. I will always have a soft spot for horror, action, sci-fi, and all the subgenres that exist inside those larger categories. What I have never felt any real connection to are those films that exist in the realm of pure sleaze. You know the ones: the films from the ’70s and ’80s, filled with ugly violence and sex that is the opposite of titillating, usually shot on cheap film stock with semi-amateur casts. But knowing these films have a large following and several companies devoted to restoring them makes me wonder what I am missing. With that in mind, I am going to do a deep dive into the world of sleazy exploitation. This is My Exploitation Education. This month’s entry is DEVIL TIMES FIVE. 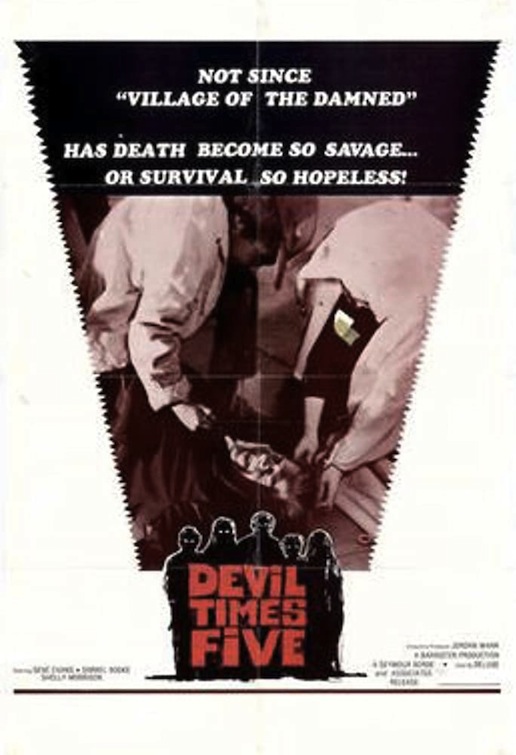 There is something I admire about the vague explanations to the murderous moppets in most movies that involve kids killing adults. In CHILDREN OF THE CORN, it was murderous cults; in WHO CAN KILL A CHILD? and THE CHILDREN, it was a mysterious illness/possession by malevolent force; in THE BAD SEED and THE GOOD SON, the kids were just straight up evil. DEVIL TIMES FIVE (a.k.a. PEOPLETOYS, TANTRUMS, and THE HORRIBLE HOUSE ON THE HILL) largely takes the evil little shit road but adds to it that old horror movie staple of mental illness. In other words, it’s basically as tasteless in execution as you would expect from a low-budget 1974 horror flick about killer kids. That’s not a bad thing.

To the secluded vacation home of corporate bigwig Papa Doc (Gene Evans)–yes, the blowhard boss who expects everyone to bend to his will is named after a brutal despot—come two employees to try and win a promotion. Rick (Taylor Lacher) is a younger, ne’er-do-well type who is dating Papa Doc’s daughter Julie (Joan McCall). Harvey (Sorrell Booke) is middle-aged and seems to constantly be covered in flop sweat. With him is his alcoholic wife Ruth (Shelley Morrison). Rounding out this unhappy group excursion is Papa Doc’s much younger wife Lovely (Carolyn Stellar, mother of co-star Leif Garrett) and Ralph, the mentally-challenged property caretaker (John Durren, who also wrote the screenplay). 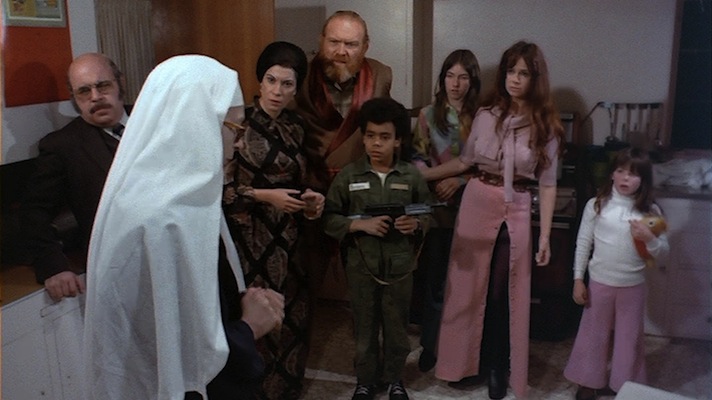 As Harvey grovels at Papa Doc’s feet, Lovely tries to seduce Rick and Ralph, Ruth chugs J&B Scotch by the liter, and Julie stands around pouting, a van skids off a nearby road and crashes, leaving the driver dead. Out of the van scramble five kids ranging in age from around eight to fifteen. They trudge through the snow to Papa Doc’s house where they manage to cut off access to the outside world and set about their devious, violent mission.

While the barely existent plot of DEVIL TIMES FIVE is straightforward, Durren and director Sean MacGregor apply such a bleak, sometimes cruel tone to the proceedings, the movie manages to find a perverse humor in its excessive nihilism. And really, when you present a group of five psychologically messed up kids as thrill killers, that’s the only direction you can take the material and not have it come off as simply gross. 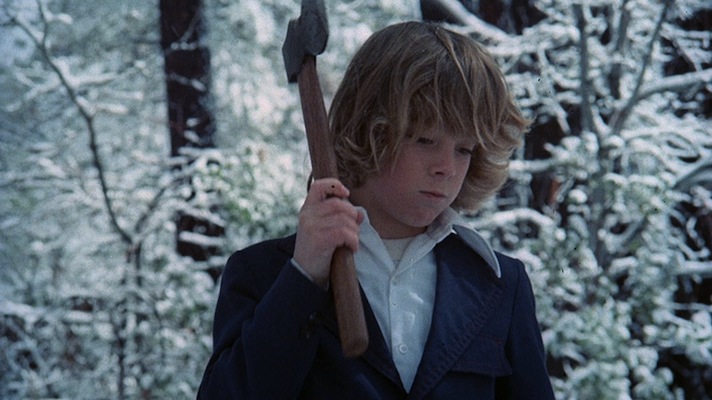 MacGregor thankfully also supplies some silly, over-the-top notes to the flick. Julie and Lovely engage in a knock down, drag out slapping/hair-pulling fight. One of the kids—Sister Hannah (Gail Smale)–dresses like a nun, yet none of the adults figure out that this teenager is not really who she claims to be until it is too late. The most excessively evil, psychotic one of the kids (Leif Garrett) is relegated to second or third banana status despite the fact that an entire movie could be based around him as the villain. 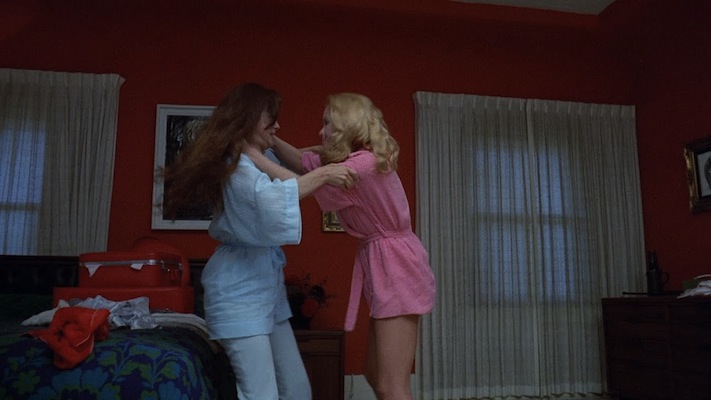 While never that bloody or gory, MacGregor alternates between truly horrifying (a slow motion beat down, punctuated with a knife to the heart) and silly (piranha eating a woman in a bathtub) murders. And there is something honestly upsetting in how the final death plays out with MacGregor’s direction providing a clever fake-out that turns bleak with how matter-of-fact the violence becomes. But even if it eventually lacks entertainment value, the nihilistic attitude is established early on in DEVIL TIMES FIVE and MacGregor is not afraid to take it to its logical conclusion. 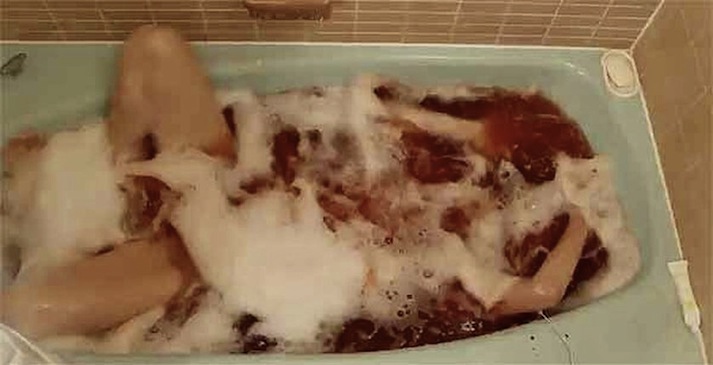 Despite some clunky editing and shaky acting by most of the child actors, DEVIL TIMES FIVE is surprisingly well put together for such a low budget, sometimes excessively lowbrow flick. Much of this is attributable to the adult cast being made up of reliable character actors. Evans had a long run as a core member of acting troupes for Sam Fuller and Sam Peckinpah. Booke was well known as a character actor on TV before the film was made and then achieved fame a few years later as Boss Hogg on The Dukes of Hazard. Morrison and Durren also had lengthy careers on television. This movie could be used as a prime example of how a committed group of experienced actors can improve a shaky script into something worth watching. 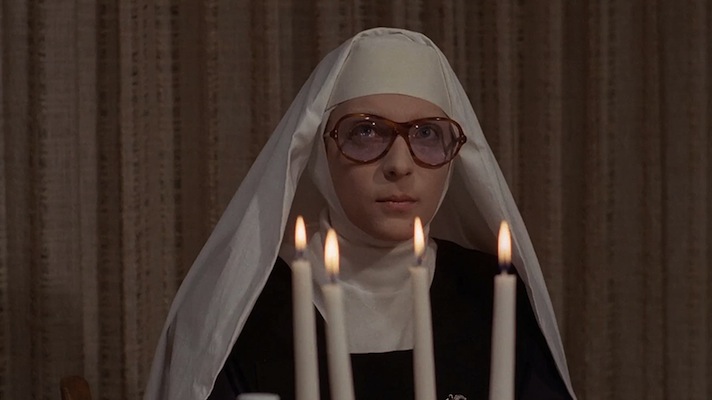 DEVIL TIMES FIVE does not really add much of anything new to the killer kid subgenre, but it plays out as one of the better examples of this kind of flick. It’s tasteless and definitely could use a subtler touch, but never becomes wishy-washy or tries to justify the actions of the kids by making the adults cruel to them. It’s midnight viewing that will only leave you with a mild hangover of sleaze the next day.