Home  ⁄  The Wire  ⁄  SCREAM FACTORY GIVES THE BURNING AND THE TOWN THAT DREADED SUNDOWN BLU-RAYS MAY RELEASE DATES
Feb 1, 2013 Comments 0

The cool crew over at Scream Factory are continuing their end of week rituals by releasing a slice of horror to get you ready for the weekend. This time out we have the official release info for THE BURNING and THE TOWN THAT DREADED SUNDOWN Blu-rays. The special features for the titles are still being worked out but the big holy shit news from this announcement is that the Michael Parks classic THE EVICTORS is going to be packaged with THE TOWN THAT DREADED SUNDOWN, both directed by the great Charles B. Pierce. Dig that good shit! I think that film is better than either of the headliners, but that’s just me. Read below for more. 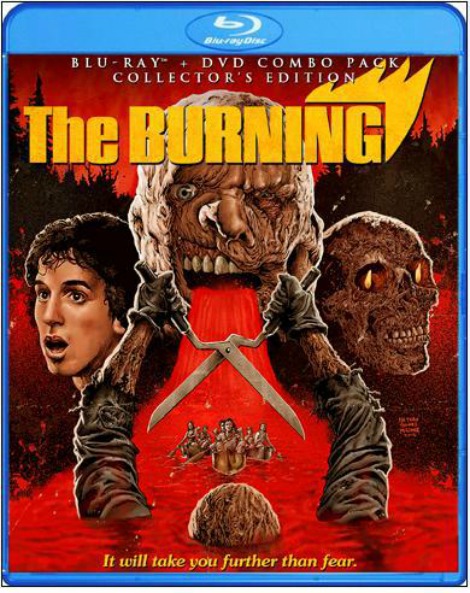 Disfigured and hooded mad killers are on the loose this spring as SCREAM FACTORY™ invites loyal fans and collectors to embark on a nostalgic trip filled with edge-of-your-seat suspense and terror! On May 21, 2013, the gory summer camp slasher The BURNING created and produced by Harvey Weinstein and features Fisher Stevens (The Cove), Jason Alexander (Seinfeld) and Holly Hunter (The Piano) in their early film roles and Charles B. Pierce’s long sought-after THE TOWN THAT DREADED SUNDOWN starring Oscar®-winner Ben Johnson and Dawn Wells (Gilligan’s Island) , arrive on home entertainment shelves everywhere from Shout! Factory.

Both movies debut for the first time on Blu-ray™. The BURNING will be presented as a Collector’s Edition Blu-ray™ + DVD Combo pack that boasts insightful bonus content, and a reversible wrap with original theatrical key art. THE TOWN THAT DREADED SUNDOWN Blu-ray™ + DVD Combo Pack contains director Charles B. Pierce’s rare cult movie classic THE EVICTOR as a bonus movie presentation on the DVD plus more extras to be announced at a later date.

*** Avid movie fans and collectors take note: those who order The BURNING Collector’s Edition Blu-ray™ + DVD combo pack from ShoutFactory.com will receive the exclusive 18”x 24” poster featuring the newly commissioned artwork! Only 300 posters will be printed, so these are only available while supplies last.***

Fans and collectors can preorder these exciting SCREAM FACTORY™ collections now at ShoutFactory.com or Amazon.com

The BURNING Collector’s Edition Blu-ray™ + DVD Combo Pack
Gather around the campfire to die!
A group of summer camp pranksters get the scare of their lives when they target the camp’s creepy caretaker…and he takes bloody revenge! “Gruesome” (The Hollywood Reporter) and “stomach-churning” (Boxoffice), this terrifying tale is “a brilliant slasher flick [and] gory as hell” (slasherpool.com)!

After a cruel joke goes awry, severely burning him and subjecting him to five years of intensive, unsuccessful skin graft treatments, Cropsy (Lou David) is back at camp…and ready to wreak havoc on those who scarred him! With his hedge clippers in hand, he terrorizes the camp and systematically mutilates each victim. Can a few courageous campers save themselves and destroy this demented madman before he kills them all?

THE TOWN THAT DREADED SUNDOWN Blu-ray™ + DVD Combo Pack (including the debut of THE EVICTORS on DVD!)
Don’t get caught in this town after sundown!
When two young lovers are savagely beaten and tortured on a back country road in Texarkana, local police are baffled. Three weeks later, two more people are slain in a similar setting and Deputy Norman Ramsey fears a pattern might be developing. Texas Ranger J.D. Morales (Ben Johnson, The Wild Bunch) is brought in to help. The two officers must find “the Phantom Killer” before he can kill again. Also starring Andrew Prine (Grizzly) and Dawn Wells (Gilligan’s Island), directed by Charles B. Pierce (The Legend Of Boggy Creek), and based on one of America’s most baffling murder cases, this horrifying suspense thriller is a shocking experience you’ll never forget.

Special Features for THE TOWN THAT DREADED SUNDOWN Blu-ray™ + DVD Combo Pack are currently in development.

Special Bonus Movie Presentation:
Charles B. Pierce’s The Evictors (DVD ONLY)
Synopsis
A nice young couple move into an eerie house located in a small Louisiana town, unaware of its violent history. Soon they find themselves tormented by the previous owners. Vic Morrow (Combat!, Humanoids From The Deep), Michael Parks (Django Unchained, Argo) and Jessica Harper (Suspiria, Phantom Of The Paradise) star in this chilling horror film.