In the beginning, there were comics.

Lone Wolf & Cub is the creation of series writer Kazuo Koike and artist Goseki Kojima. It’s a saga made up of thousands and thousands of pages, going back to the early 1970s. The story takes place in feudal Japan, where the Shogun’s top executioner Ogami Itto is forced to take his baby son Daigoro on the road after his wife is murdered. “The road” is “The Road To Hell,” the path to vengeance. Ogami Itto, a fearsome ronin, comes to be known as the “Lone Wolf,” and Daigoro is his cub. The series is a masterwork of comics art, with strong, lucid, myth-making in the writing, and stark, forceful linework in the drawing.

Here is the landmark moment where Ogami Itto gives the tiny Daigoro a choice — choose the sword, a man’s instrument, and follow his father on the Road To Hell, or choose the ball, a children’s plaything, in which case Daigoro will remain with his mother, and we all know what that means. Some fairly dark shit! Of course, he chooses the sword, and one of the great rewards of the series is how helpful Daigoro is to his father, a fearsome warrior who can wipe out entire armies of ninja assassins all on his own. But everybody needs a little help sometimes. Me being me, I love best a scene where Daigor? climbs a tree and urinates on Ogami Itto’s pursuers, to distract them long enough for Ogami Itto to rush in and separate ninja body from ninja head. 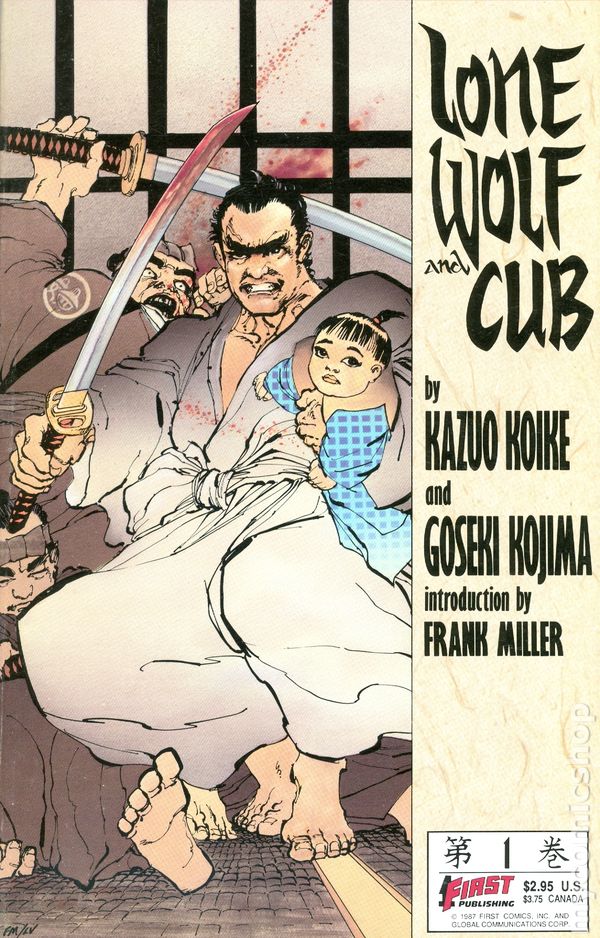 In the late 1980s, the now-long-since-defunct First Comics released a good amount of the original comics for American audiences, with covers by Lone Wolf & Cub aficionado Frank Miller, whose own 1980s series Ronin took massive swaths of inspiration from Kazuo Koike and Goseki Kojima. I got turned onto these comics in college, and soon after that Dark Horse Comics commenced the great service of repackaging the entire saga in compact, affordable, digest-sized volumes. But in truth, I’d encountered the story before then, and I heard it before I saw it.

My first encounter with the story of Ogami Itto came, as it did with so many young lasses and lads of my generation, with the 1995 release of Liquid Swords, the epochal album by The GZA of the Wu-Tang Clan, produced by The RZA of the Wu-Tang Clan. Very soon after that, I found myself in a friend’s attic, one of us somehow having gotten his hands on a VHS dub of SHOGUN ASSASSIN, the film from which so much of the interstitial dialogue and music from Liquid Swords was sampled. When you first hear that shit as a kid, let me tell you from experience, it’s mind-blowing.

SHOGUN ASSASSIN is the rare example of a cinematic remix – it’s a collection of the most iconic and violent scenes from a series of LONE WOLF & CUB films strung together and scored to a dingy gaijin proto-electronica soundtrack. With respect, Tomisaburo Wakayama wouldn’t fly as an action hero in America, where we generally prefer our cinematic killer heros to be svelte, tall and handsome; your Clint Eastwoods and such. On the other hand, Tomisaburo Wakayama is pudgy and solid, a brick with a samurai sword. From the first movie he’s already rocking a double-chin and has a noticeable spare tire under that kimono. That doesn’t stop him from slicing and dicing, or from carrying off sex scenes, which are a big part of the comics. Ogami Itto is a cocksman!

To me that was always a plus. Having a violent hero who doesn’t look like Bruce Lee — who kind of looks like he recently ATE Bruce Lee — is refreshing and strangely appealing. It adds to the incredible weirdness of the SHOGUN ASSASSIN project, which was created by American producers in 1980 by Robert Houston & David Weisman for the grindhouse audience. They edited together scenes from the first couple LONE WOLF & CUBs and brought in American voices to perform the dubbed dialogue. Most famous among them, to today’s audiences, is then-up-and-coming Sandra Bernhard (THE KING OF COMEDY) in the role of the leader of a lethal brigade of lady ninjas who does some pretty amazing things in SHOGUN ASSASSIN, such as leaping straight out of her clothes, running backwards, cuddling up to Ogami Itto, and being the only adversary in the whole movie he doesn’t end up disemboweling.  This character has one of the best exchanges in the movie, in which she declares “I am the Supreme Ninja!” to which Ogami Itto barks, “OH!” (Maybe you had to be there. But you should definitely go.) To create continuity between the various highlights that constitute the Frankenstein’s monster patchwork that is SHOGUN ASSASSIN, Houston & Weisman provided additional narration, from the perspective of young Daigoro, that as far as I can tell did not come from the pen of Kazuo Koike. One of my favorite examples:

“Anybody could be a ninja. Even a pretty woman. Or a nice lady. And you never know who. But sometimes you have to take a chance, if you want to take a bath.”

Besides Daigoro’s narration, the other element that provides the engine of SHOGUN ASSASSIN is its tremendously influential electronic score, composed (with W. Michael Lewis)  by Mark Lindsay, former lead singer of 1960s pop-rock band Paul Revere and The Raiders. Go figure.

The music is such a prominent actor in SHOGUN ASSASSIN that I imagine, along with its wild dubbing choices, extreme violence, antic performances, and final scenes transpiring across desert vistas, it is linked to my imagination by some kind of mental connection to, of all films, THE GOOD, THE BAD & THE UGLY. Not that SHOGUN ASSASSIN is as masterfully conducted as Sergio Leone’s film, but to a teenager in New York both films have a familiar unfamiliarity, an otherworldliness, that fired up the viscera of my brain in similar ways. 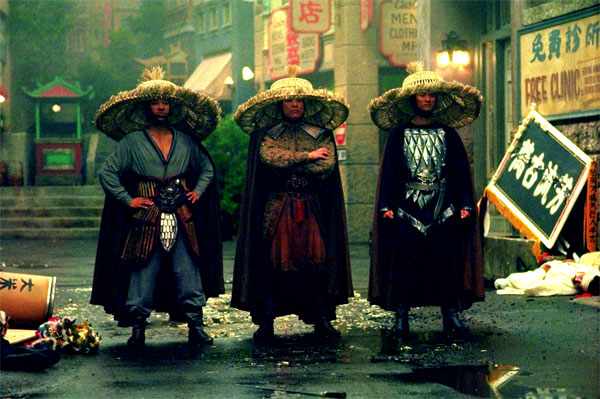 But I’m hardly the first, or the last, to have been affected by this supremely odd duck of a film. “The Masters Of Death,” the three boss-level murderers who take on Ogami Itto in the final battle, have a straw-hat/metal-claw look that fans of “The Storms” from BIG TROUBLE IN LITTLE CHINA will recognize in a second. And I’m sure I don’t have to tell you how KILL BILL 2 concludes with a reunited mother and daughter resting while watching SHOGUN ASSASSIN, in what is quite possibly the most obvious and borderline-predictable movie cue in Tarantino history. 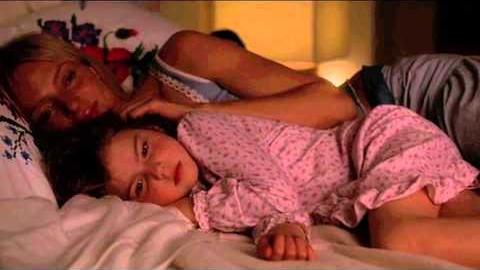 In a strange way, for such a violent and bizarre film, SHOGUN ASSASSIN engenders feelings of warmth and intimacy from those who have discovered and re-discovered it over the years. Until relatively recently, it had unofficial “Video Nasty” status. You almost couldn’t see it anywhere, unless you could, if you know what I mean. I had a friend who stole a copy when he was staying in the UK, which sounds about right.

Even now, in the golden age of media availability, viewing the film feels like it’s been pirated. Despite having some truly beautiful compositions and some moments of inarguably terrific writing (Kazuo Koike’s genius cannot be buried), still it has the sense of an endeavor this side of profane. There’s something about SHOGUN ASSASSIN that makes you feel like you shouldn’t be watching SHOGUN ASSASSIN. That’s probably why it’s so goddamn appealing.

SHOGUN ASSASSIN is available for purchase on Blu-Ray and DVD from AnimEigo, and it is screening tonight at midnight at the Cinefamily in Los Angeles. Dollars to donuts you’ll see famous people there.