Before they became the purview of the Lifetime Movie Network, there was a subgenre of theatrically released thrillers and horror movies where a woman is stalked for the duration of the film by a loon–usually a hulking character actor known for their villainous portraits, but sometimes a young leading man type subverting his good looks. Movies like THE FAN (1981, Lauren Bacall vs Michael Biehn), X-RAY (1981, Barbi Benton vs Chip Lucia), and VISITING HOURS (1982, Lee Grant vs Michael Ironside) all hit theaters within months of each other. Nestled right in amongst them was THE SEDUCTION, which hit theaters in January of 1982, starring Morgan Fairchild, Andrew Stevens, Michael Sarrazin, Colleen Camp, and Vince Edwards. Now Scream Factory has released the film on Blu-ray.

With a perfect sappy romantic ‘80s song from master composer Lalo Schifrin sung by Dionne Warwick over the credits, the story takes right off with Jamie Douglas (Fairchild) going for a skinny dip in the pool of her lavish home in the Hollywood hills under the loving eye of her boyfriend Brandon (Sarrazin). But little does she know that she is also being watched by someone in a nearby house on a higher hill. We rather quickly learn her fan (short-for-fanatic) is Derek (Stevens) and that he also has a camera with one of those giant telephoto lenses that let him get up close and personal shots of Jamie even from that distance. Not finding that level of intrusion sufficient, Derek–who also has her phone number–calls her. All of this is in the first five minutes or so of the movie!

Unfortunately, THE SEDUCTION will not being keeping up that pace, and things slow down a bit as we see Jamie at work as the top female newscaster in Los Angeles. Even her workplace is prone to Derek’s advances as he sends flowers to her there and calls her more than once. Because that level of manic energy in the pursuit of a woman was at one time thought to be romantic instead of creepy, Jamie’s co-workers all laugh at her “new boyfriend.” But Jamie’s spider-sense is already tingling. Her best friend Robin (Camp) also finds Derek’s behavior to be unnerving, especially when Derek even manages to call Jamie at Robin’s house!

Brandon goes to see his police friend Maxwell (Edwards) but the cop’s hands are tied by the smart psycho keeping things just this side of criminal, with only minor offenses like trespassing and harassment on the table. But Derek is on a slippery slope of insanity, and as Jamie continues to rebuff his frequent incursions into her life, it’s only a matter of time before someone gets hurt–or worse. And when a woman finds herself alone against a man whose love may be burning bright enough to kill, she may have to turn to playing his game against him, with all the weapons she has. Oh, and a shotgun. Let’s not forget the shotgun. 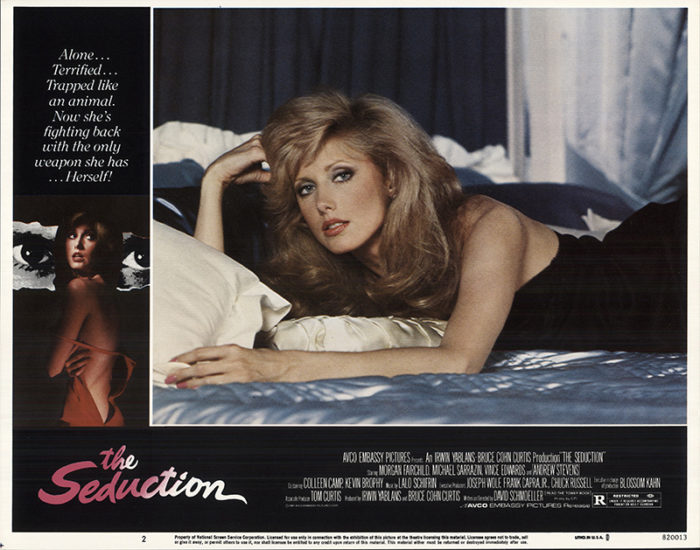 I first saw THE SEDUCTION in the theater as a teen. At that age I was there to see some scary stuff but even more interested in the R rating for any glimpses of Morgan Fairchild’s nude body it might afford. And the movie does give you those glimpses–although fleeting and far between–they are there. I thought it was a little surprising that an actress well known at the time for appearing on a nighttime soap called Flamingo Road on NBC would do any nudity, but she apparently didn’t mind letting her body be seen a few times for a few seconds. I watched the movie another time on VHS a couple of years later with friends, and I haven’t seen it since. I enjoyed revisiting it. It’s certainly not a perfect thriller (even the producers agree with me as I saw when I delved into the disc extras), but it’s a worthwhile watch for fans of this genre.

Writer/director David Schmoeller does both of his jobs pretty well, but after these movies became a staple on Lifetime it’s hard to separate this from them with that cast and plot. Thankfully producers Irwin Yablans and Bruce Cohn Curtis do give the feature film a glossy look–mostly thanks to cinematographer Mac Ahlberg, an underrated director of photography normally associated with producer Charles Band’s Empire and Full Moon productions from the ‘80s to the 2000s. According to the behind the scenes extras, he developed a bit of a crush on Fairchild himself, but it seems to have inspired him to photograph her exceptionally well, and the actress–a beautiful woman then and now–has never looked lovelier on film. She also performs her part pretty well, and thankfully has a decent character arc to play with, going from fear to anger to cold, calculated fury over the 104 minute running time.

The other main actors all play their roles with the same care; Sarrazin is a little bland…as always, Camp is a welcome presence…as always, and Edwards (no relation) is fine as a brusque authority figure…as always. A couple of other familiar faces are dotted into the cast as well, but it’s not a treasure trove of stars-to-be as some ‘80s movies are. Behind the camera, mention must be made of Lalo Schifrin, who was producer Yablans’ neighbor, and who provides his customary lush score here.

And we really must single out sound effects editor Richard Raderman, which I’ll bet will be his only mention in any review of this Blu-ray that you read. He puts a particular sound effect into THE SEDUCTION–not once, but twice–which made me laugh even in that original theatrical viewing in 1982. It’s also the reason I showed it to my friends on VHS a couple of years later. At two points in the movie–a fight with Sarrazin and during an escape from Fairchild’s house–Stevens slams into a wall and onto the ground. Accompanying each collision is a very distinct sound effect from the old Pink Panther cartoons. My friends and I always called it “rock on rock,” and my best description of it is basically that a giant hunk of granite landing on another with the most “rocky” impact you’ve ever heard. It’s unmistakable. And it has been making me laugh in this movie for decades now. I do actually believe the mix on the Blu-ray might tone it down slightly – as my memory of hearing it in the theater and at my friend’s house is that it was loud as hell. But it’s possible my memory might be fuzzy after all these years. Still, it’s a gloriously silly moment that you get two times in the movie, which in the end is a solid thriller with enough great ‘80s-ness and entertainment value to be worth a watch.

The new Blu-ray from Scream Factory is well produced. The film looks very good with the gloss of the production and the bright colors faithfully recreated and Ahlberg’s heavily lit night shooting gives solid blacks when darkness does come in. The sound is mixed well, with vocals, sound effects, and the musical score all blended together at a good level. It’s not a reference quality disc, but the presentation is damned good for a 37-year-old low budget thriller.

THE SEDUCTION remains a pretty topical movie too, as we are ever more aware of the presence of stalkers in the world. The Blu-Ray supplements address this several times in different ways. Those extras are plentiful too, with a total overall running time that rivals that of the movie. There are separate interviews shot very recently with Fairchild and Stevens and then several that feature producer Bruce Cohn Curtis. One is a solo interview with him and the others are group efforts teaming him with various cast and crew members, notably his co-producer Irwin Yablans.

There is also an interview with a Los Angeles police representative in charge of stalker crimes. It references several high profile celebrity stalkings, including the sad tale of Rebecca Schaeffer. Maybe the guys behind a movie like THE SEDUCTION aren’t the people who should be speaking to these crimes, but their hearts seem to be in the right place and the situation is treated seriously for the short piece.

Curtis and Yablans also team up with Schmoeller for a commentary. In his solo interview Curtis talks about a falling out that ended his production run with Yablans. When they get back together for the other interview and commentary it’s obvious there’s still some friction between the gentlemen. It’s never less than courteous and civil, but you do hear them taking minor shots at each other throughout both special features, especially the commentary, that often go like this:

Curtis: “Irwin, remember when you got so upset at the curtains on the set and screamed and tore them down?”

Of the three men, Curtis far and away dominates the conversation, though Yablans is not far behind him. Poor Schmoeller can barely get a word in edgewise. I haven’t heard any of the director’s other commentaries, but I hope he’s a little more verbose in them than he is here. It is also during the commentary that both producers talk about the movie starting to drag at several points as it enters the final act–which I don’t disagree with–and both they and the director express a joking interest in recutting the movie to tighten it up today! It’s a good listen as the producers go over all the aspects of the production, with the added bonus of them carping at each other like an old married couple.

All in all, this is a very good disc of a pretty good thriller. THE SEDUCTION doesn’t rack up a huge body count, but the talents of Fairchild and Stevens keep the movie on track even when it slows down in that second act. I would definitely recommend this one for thriller fans or ‘80s movie completists.

THE SEDUCTION Blu-ray is now available from Scream Factory.