We all know that Steven Spielberg’s JAWS is the best shark movie ever made. That’s the one all others are judged against. But what’s the second best? I’d like to posit that the answer to that question is 47 METERS DOWN. Let’s be clear about something – Spielberg’s film is a work of art, whereas the one directed by Johannes Roberts is exploitation schlock. That said, the Roberts picture has a couple elements that help it rise above your SHARKNADOs and your DEEP BLUE SEAs and your SHARK NIGHT 3Ds. Sure, it’s schlock, but it’s darn fine schlock! 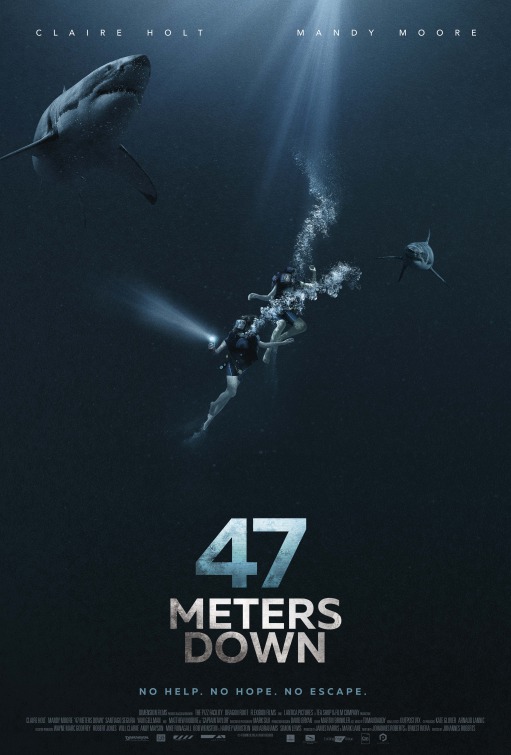 In case you haven’t seen it, the story concerns two sisters, Lisa (Mandy Moore) and Kate (Claire Holt). Lisa was supposed to vacation in Mexico with her boyfriend, but they broke up, so she brought Kate with her instead. They get the bright idea to go cage diving in order to see some sharks up close. While submerged, the boat’s winch breaks, sending them to the ocean floor. How far down are they? If you said “47 meters” then, duh, it’s right there in the title.

The thing about most shark movies is that there’s usually some kind of “escape” for the characters. As soon as they get out of the water, they’re safe. In JAWS, Roy Scheider calls everyone out of the ocean. Only those who stay in get chomped. In THE SHALLOWS, Blake Lively climbs up on a rock where the shark can’t get her. By comparison, 47 METERS DOWN offers no escape. Lisa and Kate are at the bottom of the ocean in a busted cage. They have nowhere safe to go in order to get away from the sharks. The women are stuck, with no refuge. Realizing this gives the movie an immediate edge because you know their chances of survival have dropped precipitously.

Such a twist would, on its own, be enough to distinguish 47 METERS DOWN from other shark thrillers, but there’s a second ingenious twist. This movie offers two potentially fatal demises for its characters. Obviously, they stand to become shark food. If they can somehow avoid getting eaten, though, they risk running out of oxygen when their tanks empty. This complication gives the story a ticking clock quality that makes you bite your fingernails clean off. Can they somehow dodge the sharks long enough for a rescue team to bring them back up before they can no longer breathe? Between these two perils, the survival odds drop yet again, to virtually less than zero.

Part of the movie’s beauty is that it forces you to think about which of those two ways you’d rather go. I know what my answer would be, and it’s not suffocation. If you died from lack of oxygen, people would only discuss how tragic and unpleasant your death must have been. Expire the other way and they’d tacitly acknowledge that there was something badass about how you met your demise. “They got eaten by a freakin’ shark!”

47 METERS DOWN is not as artful as JAWS. Nevertheless, it presents you with sisters who are in a dire situation from which there is no easy escape, and they are facing two deeply horrific fates. The movie doesn’t need artfulness when it has the ability to drive you nuts by mentally putting yourself in their shoes (or, more accurately, flippers). From start to finish, 47 METERS DOWN conjures up a feeling of dread that overtakes you. With the majority of shark movies, you know the heroes are probably going to survive at the end. In this case, you’re pretty certain both women will end up dead.

Even people who like the movie admit that it should have ended a minute sooner. That would have given the audience a nihilistic gut punch. Instead, there’s a coda that offers at least a semi-happy ending. It’s not completely happy, but neither is it as dark and disturbing as the story clearly wants to be. You can easily rectify the problem by shutting it off with 60 seconds to go. Then again, maybe Roberts thought it needed a small ray of light after so much unrelenting bleakness.

It’s doubtful that anyone will ever top JAWS as the best shark movie, which is okay. 47 METERS DOWN does its own thing, and it brings something special to this particular sub-genre of horror. Johannes Roberts has made the first great shark attack flick of the 21st century, as well as one that deserves to be held in high esteem by fans of cinematic exploitation.