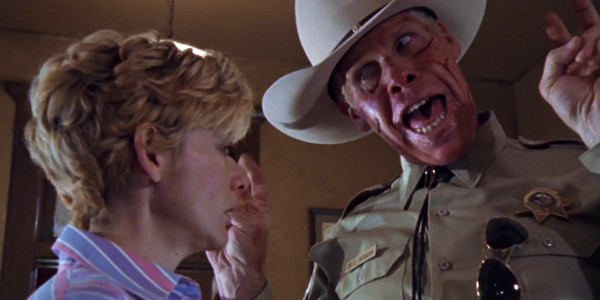 Stephen King is the most influential voice in horror of the late 20th century. His books have been best sellers since his debut and have gone on to spawn numerous adaptations in film, TV, video games, and other media. King Of All Media looks at those adaptations, starting with his TV miniseries in chronological order. Each week Alejandra Gonzalez and Rob Dean will discuss a new miniseries project of King’s, with today’s installment being on 2006’s DESPERATION, directed by Mick Garris.

Rob Dean: Stephen King is a master of horror—but more precisely he’s the master of horrific scenarios. His success is equal parts figuring out a high concept that is upsetting to many people and then depicting the most intense moments with strong imagery and tight control of rhetoric. But his most powerful tactic that runs throughout his work is the use of dramatic irony to instill terror. Specifically, he takes things that should be sources of comfort and turns them into nightmares that haunt characters. Family (THE SHINING), small towns (SALEM’S LOT and THE TOMMYKNOCKERS), adoring fans (MISERY), friendly pets (CUJO), even the machines that help us get around (TRUCKS)—all become twisted from respites of chaos into the engines of that chaos, which is an unsettling tactic. With DESPERATION, King uses the frightening hook of a police officer that uses his authority to enact a cruel plot. Obviously, there are many instances in history (and present day) where cops have been weaponized against their own populace—which is part of what makes this scary scenario much stronger and also ties in to one of King’s other themes in this story: America’s ugly history. After all, as it’s said in BILLY JACK, “When policemen break the law, then there isn’t any law – just a fight for survival.”

A young couple (Henry Thomas and Annabeth Gish) is driving back to Salt Lake City through the Nevada desert when they are pulled over by a cop (Ron Perlman). Soon they find themselves arrested as it becomes increasingly apparent that something is wrong with this police officer. Others have been taken in and abused by him, and the group works together to escape and figure out how to defeat whatever has taken a hold of this man and laid waste to the small town of Desperation.

DESPERATION, with a script by King and directed by his most prolific collaborator Mick Garris, starts off promising. There’s actual cinematography work where the camera moves, and it’s not just establishing shots and close-ups like traditional TV camerawork. Perlman turns in a great performance as the unhinged and possessed Collie Entragian, and there are some suitable surprising moments, unsettling imagery, and creepy scenarios. The cast is loaded with Perlman, Gish, Thomas, Steven Weber, Charles Durning, Matt Frewer, and Tom Skerritt, who all acquit themselves well with the material. But there is a fatal flaw in the script in the form of a magical child (a familiar King trope) who is powered by Jesus to defeat this ancient evil. Not only is the kid (David Carver, played by Shane Haboucha) a source for exposition and becomes the de facto leader of the group, he’s also responsible for many awkward conversations about faith that obliterates any subtext in exchange for just blatant text about how God is good. 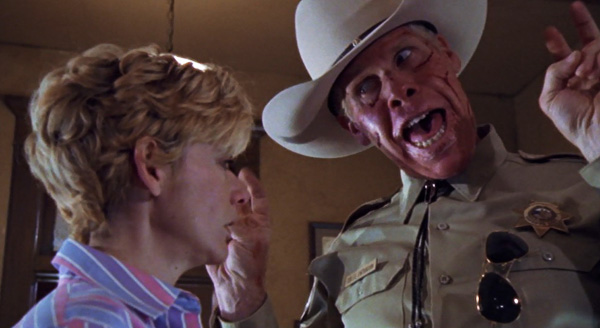 Ale—what did you think of DESPERATION? Were there any highlights for you? And why do you think King is incorporating sins of America’s past while parallel to his many speeches about the power of God?

Alejandra Gonzalez: Rob, first and foremost I want to say that I love what you said about King being the master of horrific scenarios. I never thought of it that way specifically, but as I was watching DESPERATION I thought that the creepiest part of the whole thing was how most of it, particularly the first half, is an unfortunate scenario one might actually find themselves in. I know you already mentioned it, but cops who assert violence and power over the people they are supposed to be protecting is something very scary and real, which makes DESPERATION all the more frightening.

I ended up quite liking DESPERATION. I know you also said it starts off promising, but I disagree. I thought the beginning was pretty bland and that the miniseries actually works up towards being something I was able to really invest myself in. Unlike you, I didn’t totally love the camera work in this. I think the excessive use of canted angles was disorienting, and not in a good way. I also think the extreme close-ups of Ron Perlman made me laugh and in turn made him less menacing to me. I also liked the role of David, but I do agree that it makes the themes of DESPERATION blatantly obvious. It gives the viewer no credit or food for thought, which is something a premise like this should do. Overall, I did like DESPERATION and I’m glad it did the source material some justice, as I know it is many peoples’ lesser known favorite. I effortlessly cared about the characters and I think the group dynamic worked well for me. My very favorite scene is the abandoned supermarket scene where the group meets up with Cynthia and Steve. Not only does it loosely remind me of MESSIAH OF EVIL, but the slushee machine overflowing with red liquid reminds me a lot of the elevators in Kubrick’s THE SHINING. Not to mention the “Redrum” on the walls in the sheriff’s office. The little details like that are my favorite parts of DESPERATION.

As far as your question about faith goes, if we’re looking at Kings’ more religious work in general, I think he would argue that the evil that occurs and the brutality of the world is all a result of our own actions and not so much because of some malevolent God. Offline we discussed that you had some opposing thoughts in regards to DESPERATION specifically, so what are those? 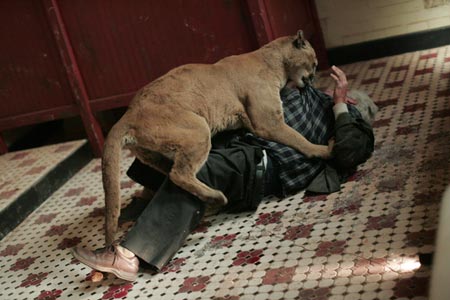 Rob Dean:  Good call with the MESSIAH OF EVIL vibes in that grocery store scene. I think that we have crossing opinions about this film, in so much as you didn’t like the beginning but enjoyed it the more it went on and I enjoyed it at first but less as it went along.

I think that the David character is a misfire in execution (writing and performance) as well as an awkward story element. Too much of his dialogue is just exposition and spouting about what God wants them to do, so then everyone is hinging on Super Kid’s every word. And when they aren’t doing that, there are far too many scenes of Tom Skerritt browbeating a grief-stricken child over his religious beliefs. It’s an odd dynamic that finds this old cantankerous man pointing out all of the logical gaps in David’s faith. However, while I think it is poorly executed, I think it is a very intriguing and promising idea that King presents in this story. The characters, to varying degrees, wrestle with God’s role in their plight. And while it’s meant to evoke the Judeo-Christian lord, that’s not what’s actually happening because their God isn’t Jesus or Yahweh—their god is Stephen King. He invented the world, gave them life, is the architect of their sorrows and triumphs, and engineers solutions to their problems. For these fictional characters wondering why they were made and why God doesn’t stop Tak, the answer is that King has designs for his storytelling. He’s not necessarily being cruel by killing off characters, or inviting evil events to happen, any more than he’s demonstrating grace by plotting their escape and victories. They all serve the story he sets out to tell, and it’s mostly coming from a place without real moral justice. I don’t think King’s script does enough with this aspect, buried in a lot of overt and boring discussion about God’s role. But I do think it’s a very interesting angle to consider—a bunch of characters pondering the whims of their creator and hoping to divine some sort of rationale for all of it.

Another quote, besides the one from BILLY JACK, that was in my head while watching this is from William S. Burroughs in Naked Lunch where he wrote that “America is not a young land: it is old and dirty and evil before the settlers, before the Indians. The evil is there waiting.” A significant aspect of the plot of DESPERATION is the story of the Chinese workers who were abused and forced into slavery and suffered, but are now presented as happy townsfolk in murals or with an oral history that suggests they were “almost” like everyone else, as if that’s an okay thing. That sense of ancient evil that has long been slumbering underneath the surface of civilization is recurring in King’s work like THE SHINING, THE TOMMYKNOCKERS, and IT, amongst others. This veneer of polite society paving over the horrible acts, and places literally founded on the shoulders of monsters, is a strong idea about how these atrocities are always present, even if they are ignored or buried. I don’t know how that couples with King as God theory, except that maybe it’s the negativity and fear he brings from his world and his life so it’s a part of the fabric of the new worlds he’s creating. That these ancient elements are there in every conception of a new world, already tainting it.

What do you think about King’s use of ancient evil revisited upon modern day people? It’s a common trope we’ve seen in a few of his adapted works so far. What do you think King is trying to say by using that narrative shorthand in so many of his stories? And what is the connection (or significance) between his frequent use of elder malevolence and his frequent use of magical children to combat it? Lastly—what do you think is the significance of the title, DESPERATION, especially in relation to the religious elements? 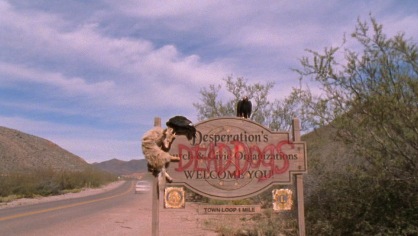 Alejandra Gonzalez: I think that having ancient evils revisit a modern day population enforces the idea that the “sins” of the past have the potential to affect generations down the line, forcing them to pay the consequences. I think this goes hand-in-hand with King’s use of elder malevolence that is typically combated by children in his work. I guess I interpret it as every new generation having the potential ability to right the wrongs/evils of the generation (or many generations) before their own. As far as the title goes, I always thought it was a nod to the desperation that often drives people to seek God in the first place. Still, now that we’ve discussed the miniseries’ themes more elaborately, I feel like maybe there could be other meanings behind the title.

DESPERATION was definitely in the top half of the miniseries we’ve covered so far. I hope you thought so too! I’m still pretty sure I won’t enjoy any more than I enjoyed STORM OF THE CENTURY, but I remain hopeful! Next time, we’re going to cover NIGHTMARES & DREAMSCAPES, which I am pretty thrilled for because it is my favorite of King’s collections of short stories. It’s also the first miniseries we’ll cover that is an adaptation of a collection, so it will be interesting to see how it differs from the rest.

Living in Miami when she’d rather be in Santa Carla, Ale mainly writes and podcasts about all of her favorite things: vampires, queerness, and crappy DTV sequels. When she’s not constantly refreshing her twitter feed, she’s either watching horror movies or Lilo & Stitch – no in between