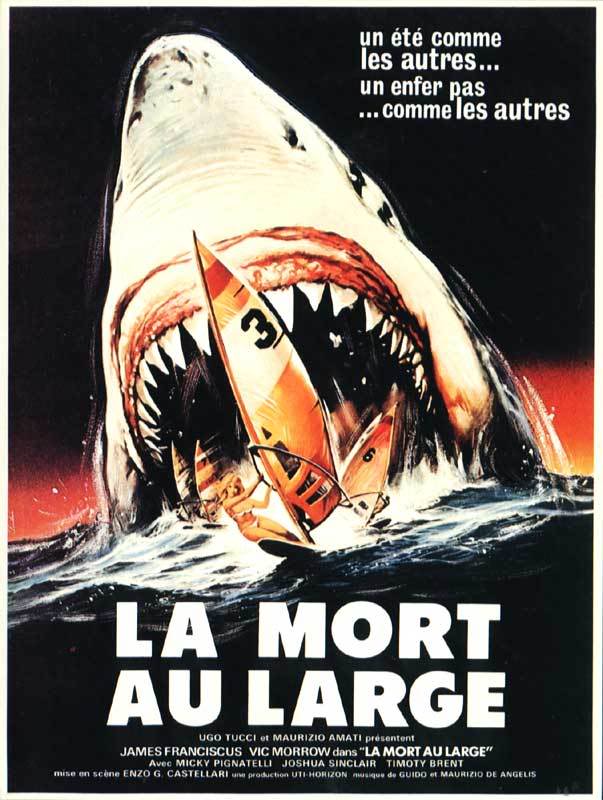 Hey! When watching JAWS, have you ever thought, “Well, this is pretty good.. but what it could really use is more windsurfing, stock footage and stupidity!”? Well, you’re in luck! Enzo G. Castellari’s GREAT WHITE (aka L’ULTIMO SQUALO, a.k.a. THE LAST SHARK) is a nearly beat-for-beat remake of the Spielberg classic, but manages to shoe-horn enough hilariously dated elements – that funk disco score isn’t going to make you forget John Williams – that the sheer audacity of what you’re seeing is enough to keep all but the most jaded audience members watching. Unfortunately, actually getting to see it might be a bit of a problem since GREAT WHITE isn’t currently available in North America, thanks to a lawsuit from Universal Pictures, which yanked it from theaters shortly after its release. Still, if you’re so inclined, it’s readily available as an import, and remains surprisingly watchable despite its, um, reverence for the source material. 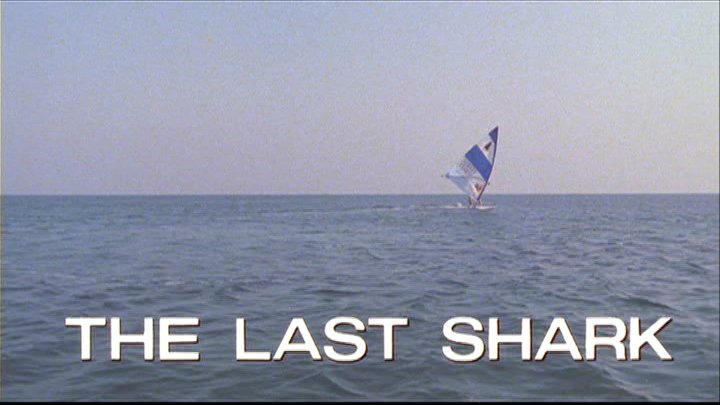 But how much of a rip-off are we talking here? Well, let’s just say that with a few minor alterations, a plot summary of Jaws could easily summarize the plot of GREAT WHITE. Instead of a displaced New York policeman, we have shark expert Peter Benton (James Franciscus). Instead of a crusty old New England shark hunter, we have… a crusty old Irish or Scottish (he keeps switching!) shark hunter. Everyone else seems to be sleepwalking through their parts, but Vic Morrow, as salty sea-dog Ron Hamer, recklessly throws himself into his ridiculous accent and sudden unexplained friendship with Benton. We have a teenager getting eaten, and a skeptical mayor refusing to close the beaches because of an upcoming (windsurfing!) regatta. We even have a sniveling mayor’s aide! While the massive worldwide success of JAWS inevitably led to a ton of rip-offs, most at least changed the antagonist to some other animal – alligators, piranhas, bears – or altered the plot significantly, but here we have – as in Jaws – a great white shark terrorizing a small coastal town.

But this is an exploitation movie from schlock veteran Castellari (KEOMA, THE INGLORIOUS BASTARDS), so we’ll trade in the Hitchcockian scares and psychological terror of Spielberg’s original for some old-fashioned weirdness! This shark isn’t just a mindless killing machine, it’s also a jerk, and seems to be targeting the same group of people over and over. Nets can’t stop it. Teenagers with shotguns can’t stop it. Even, in perhaps the greatest moment ever committed to celluloid, a helicopter falls victim to its tremendous power. 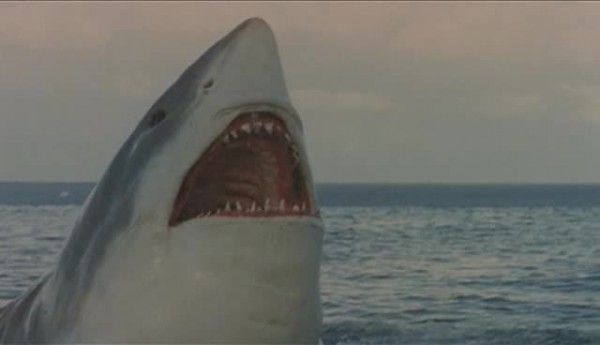 Let’s explore that scene in a little more detail. With shark-related deaths piling up, the Mayor is watching his future political aspirations go down the drain. Faced with a need to kill the shark immediately, he gets himself a pilot and heads into the sky in his personal helicopter. Easily tracking the giant creature, he lowers some delicious meat into the water with the hopes of doing… something. It’s never quite explained how he hopes to kill or capture the creature by feeding it, but it hardly matters as once the Great White takes the bait, the rope lowering mechanism malfunctions, sending our intrepid mayor into the water. The pilot attempts to lower the whirlybird so he can climb back on-board, but instead the mayor gets his legs bitten off! Ouch! And to add insult to injury, the shark grabs onto the helicopter and pulls the whole thing into the briny depths. Astounding.

The shark itself actually looks quite good at first, aided by copious amounts of stock footage that *just* *doesn’t* *quite* match up with the actual film. When he first pops out of the water, mouth agape, you might even think – rightfully – that it’s pretty neat looking. Unfortunately, ol’ sharkface is a bit of a one-trick pony. All he can do is poke his massive head out of the water and open his mouth. He can’t even chew convincingly, which becomes a bit of a problem once he has to gnaw his way through a deck, a surfboard, or a human torso. Still, he gets the job done, thanks to what must be massive air compressors hidden behind his teeth. Every time he attacks, his victims go sailing into the air willy nilly. Such power! 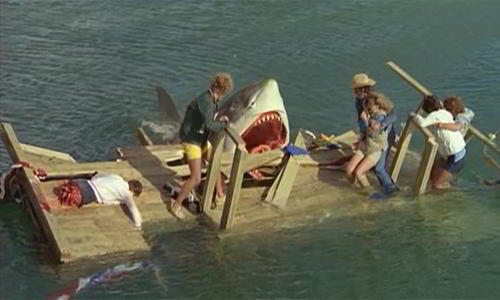 It’s all filmed without much style, and the sometimes obvious dubbing doesn’t help the generally stiff performances. James Franciscus (the finder of lost loves?) is totally vanilla, even while giving his daughter a ridiculous speech after she gets her leg eaten. Still, Vic Morrow gives the shark a run for his money when it comes to scenery chewing. He doesn’t get a great scene like Robert Shaw’s ‘U.S.S. Indianapolis Speech’ in JAWS, but he does get to spend some time in a wet suit, and eventually ***SPOILER ALERT*** his corpse is used to blow up the shark! “Smile, you son-of-a…”

Sure, GREAT WHITE is just a great big goofy rip-off, but it’s so blatant and, at times, incoherent, that it’s hard to stay angry for long. Enzo G. Castellari is a perfectly capable director, and while he’s rarely flashy, he always delivers the goods – even if they sometimes end up being a bit ragged. While it’ll never be mistaken for great (white) art, it’s a shame that a wider audience can’t experience what is a rollicking, rolling, explosive good time. Make it a double feature with the original and just try and wipe the smile off your face. 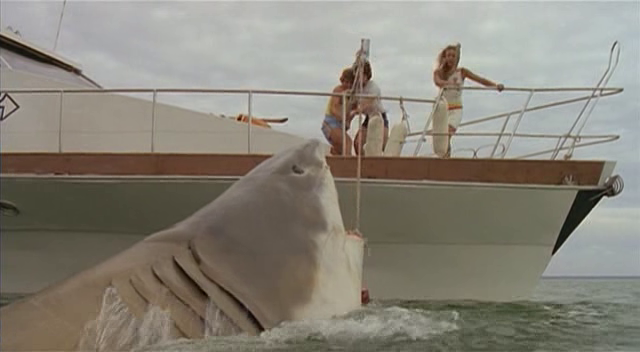