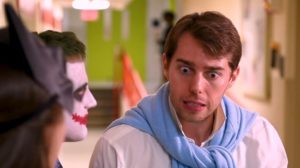 I am not a musical theater fan, but I am a fan of THE DARK KNIGHT so I can appreciate OPENING NIGHT and its idea of a high school musical theater program putting on a creaky, misguided adaptation of Christopher Nolan’s dark opus.

Not only do we get snippets of numbers like a ballad dedicated to Harvey Dent and The Joker rapping about how he got his scars, we also get backstage drama as the production’s demented director (Darren Lee Brown) conspires to turn the best friends playing Batman and The Joker against each other to increase the authenticity of their performances. 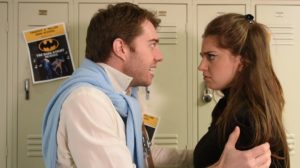 The tone goes a little over-the-top at times, but the scenario is a fun one and many of the jokes hit their marks. There is even a nice bit about the lack of knowledge of and reverence for pop culture landmarks when it comes to generational differences. But that is as deep as the film goes. This is a light lark that is simply fun and deflates a little of the somber tone of the darker Batman films. My only complaint is that OPENING KNIGHT would have been a better title.