Long before M. Night Shyamalan became a joke with THE HAPPENING and an inhuman monster to some for his poor film adaptation of popular animated series AVATAR: THE LAST AIRBENDER, he was seen as a rising star of a director. While his movies were either hit or miss for individuals they were mostly seen as at the very least, pretty good; it just depends on what you wanted. To some, UNBREAKABLE is one of the best deconstructions of the concept of superheroes ever put to film long before we hit the deluge of superhero cinematic universes we have now, THE SIXTH SENSE still holds up as a classic and even THE VILLAGE is defended by some as being a smart drama hidden under the guise of a creature feature. Of all the man’s works before THE HAPPENING…well, happened, SIGNS remains my personal favorite.

SIGNS didn’t try to reinvent the wheel; it was a fairly typical alien invasion movie with splashes of family drama and a dose of religious undertones. The film works even if the hokey ending detracts from some genuinely scary moments that happen throughout the film’s run time. The hapless family who find themselves caught in a battle to defend their home from unknown invaders is a likable group. Mel Gibson (back when he was likeable, Joaquin Phoenix, Rory Culkin and a young Abigail Breslin carry the film on their shoulders. 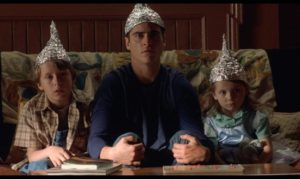 From an atmosphere standpoint SIGNS knocks it out of the park. Right from the start the film exhibits this sense of unease that works well with the alien invasion story. The build up to the fantastic home invasion sequence at the end of the movie is superb thanks to a Spielbergian approach to monster portrayal. Throughout you only ever see brief glimpses of the aliens; these scenes are what really make the film memorable and work in spite of the dated CGI special effects. Easily one of the most iconic scenes in the movie, it actually ended up making Bravo’s 100 SCARIEST MOVIE MOMENTS, is where Joaquin’s character is sinking into paranoia regarding the alien threat and watches unsettling footage on the news showing proof that these beings exist. It’s a scene that builds up to a scare that walks the line of being a jump scare but is so smoothly done it just sends chills utilizing music and the concept of found footage deftly.

SIGNS is a recommended watch is you’ve never seen it and is something that should be revisited. The pacing is good, the unsettling atmosphere is great and even the subtle score of the movie is worth remembering. It seems like many of the films of M. Night it’s either you love it or you hate it but to this day it still seems like the most enjoyable and digestible of the man’s body of work and doesn’t rely too heavily on the “what a twist” approach he became known for thanks to shows like Adult Swim’s ROBOT CHICKEN and really anything that parodies the guy. Just remember, swing away.