The first and only time before last week that I had watched SILENT NIGHT, DEADLY NIGHT PART 2, I said some pretty brutal things in a review on my blog. In fact, I didn’t so much write a review as I did an extended skit where I tried to imagine how such a film was made. After watching the new Scream Factory Blu-ray of the film, I am more than a little surprised. I’m surprised that I was greatly entertained by the film and Eric Freeman’s bizarre, eye-rolling performance. And I’m surprised by the fact that—according to the description of the production on the bonus features—I was weirdly close to accurate with my snarky little ideas about how the film was conceived. 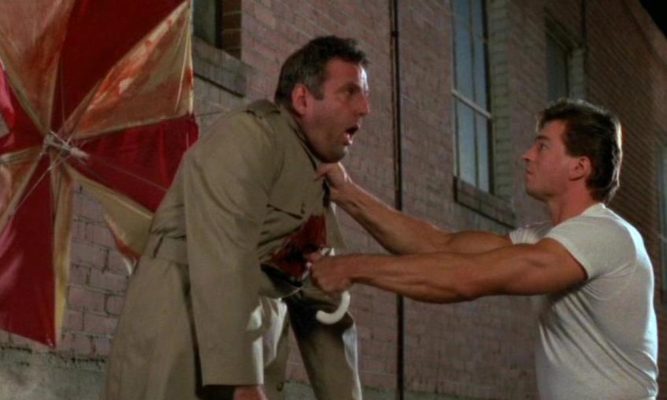 For the uninitiated, SILENT NIGHT, DEADLY NIGHT PART 2 is made up of roughly 45 minutes of footage from the first film in the franchise. Co-writer/director/editor Lee Harry frames most of the film as a flashback by Ricky Caldwell (Freeman), an inmate at a hospital for the criminally insane, told to criminal psychologist Dr. Bloom (James Newman). Ricky is the younger brother of the first film’s psychotic killer dressed as Santa, so many of his remembrances lead to all of the kill scenes from the first film (in addition to the young boys’ unhappy time in an orphanage, suffering under the iron fist of the cruel Mother Superior) before the film finally gets to new material as Ricky develops the same homicidal tendencies linked to the color red, a hatred of bullies and nuns, and—of course—Santa Claus. 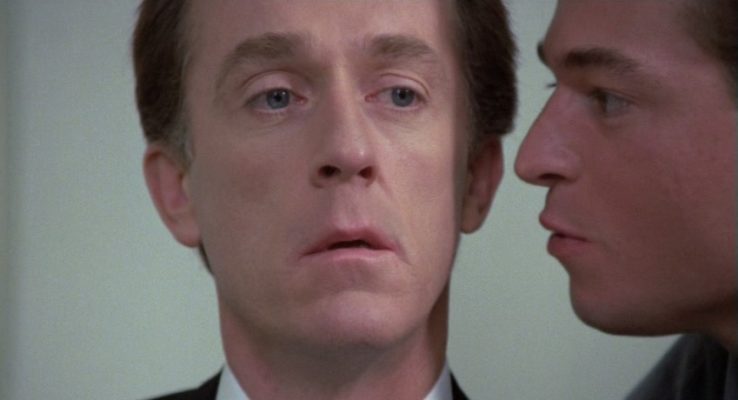 The new material, while following the semi-traditional arc of a serial killer’s awakening, is memorably weird, funny, and marked by a couple of creative kills and the simultaneously arch and unhinged performance by Freeman. The film’s infamous “Garbage Day!” sequence is a delirious piece of filmmaking as Freeman turns his already big performance up to eleven or twelve, Harry pulls off an impressive combination of dolly and steadicam shots, makeup effects artist Christopher Biggs creates a cool head with exploding eyes, and a dangerous looking car stunt comes within inches of taking out stuntman Spiro Razatos.

SILENT NIGHT, DEADLY NIGHT PART 2 unfortunately is never able to recapture the high of Ricky’s rampage leading to an ending that feels rushed when it should be everything the film has built to (Ricky dressed as Santa, wielding an axe). It is frustrating when the filmmakers come so close to pulling off the nearly impossible feat of building a great sequel out of bits and pieces of an inferior movie. 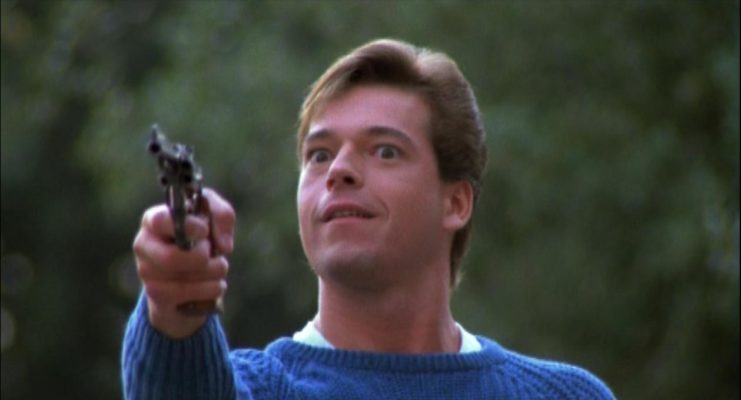 Admittedly, the first half of the film that is composed of so much footage from Part One is a real cheat. But the way I see it, the filmmakers are giving the best bits of a not very good movie to the audience. If anything, the use of Ricky’s voiceover as he recalls events (many of which he never even witnessed) that were rather ugly and mean-spirited in the first film, actually provides enough levity to change the tone to something a little more palatable. Beyond the change in tone, the integration of the old footage into the forty minutes of new footage that Harry shot is something of a fascinating editing exercise because against all odds, the film flows fairly smoothly as a passing of the baton from the first film’s killer to Ricky, who is shown aging from an infant to a deranged twenty-year-old.

Given the film’s low-budget, mercenary origins, the new 2K scan (of an archival print since the original film elements are lost) for this Blu-ray looks surprisingly good. While the scenes in the mental hospital and a couple of other interiors betray the lack of funding and time, the ambitious stunt work, very good makeup effects, and Harry’s sharp editing and ambitious direction make the film feel and look far more polished than the first film in the franchise (and many other mid-’80s slashers, to be honest). 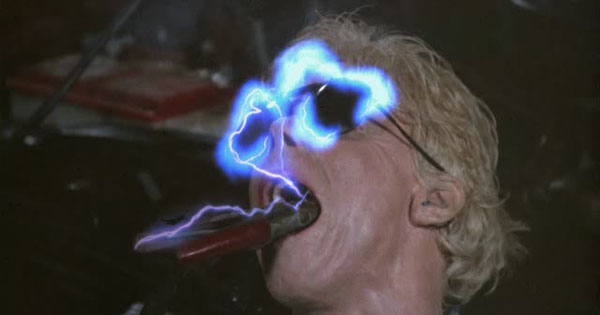 The main attraction of this Blu-ray is the participation of Freeman. He worked in bit parts in TV for a few years following the release of SILENT NIGHT, DEADLY NIGHT PART 2, but then retreated from show business. In the ensuing years, as the film gained a cult following, his performance that can be called half sincerely menacing and half a satirical take on a movie psycho became its most obsessed-over aspect. In the last few years, he has re-emerged, appearing at conventions and doing some bit parts on television again. He is all over the supplements here and clearly has an ambivalent relationship with the film. While consistently expressing his gratitude to the fans who really enjoy the film and what he did in it, he does admit to some bitterness at reactions that found him campy or unintentionally broad. As someone who had that initial read on his performance and the film, let this stand as my apology to Freeman and the filmmakers, because on second viewing, I think they made a hell of an entertaining film. 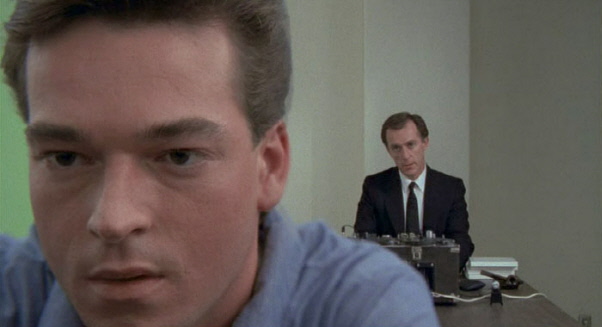 Between two commentary tracks, a comprehensive making-of doc, and a visit to the shooting locations with Freeman, the production of the film is dissected in fascinating detail. The overall consensus seems to be that Harry pulled off a low-level miracle getting the film put together with executive producer Lawrence Applebaum literally standing next to him tapping his watch with his finger whenever it took too long to get a shot. After watching the film again and hearing the stories from the cast and crew, I have to agree.

It is rare that my mind changes so much on a film that I first saw as an adult, but I have to admit when I was wrong. But I am happy that my opinion has changed for the positive and I gave SILENT NIGHT, DEADLY NIGHT PART 2 another chance. It deserved it. 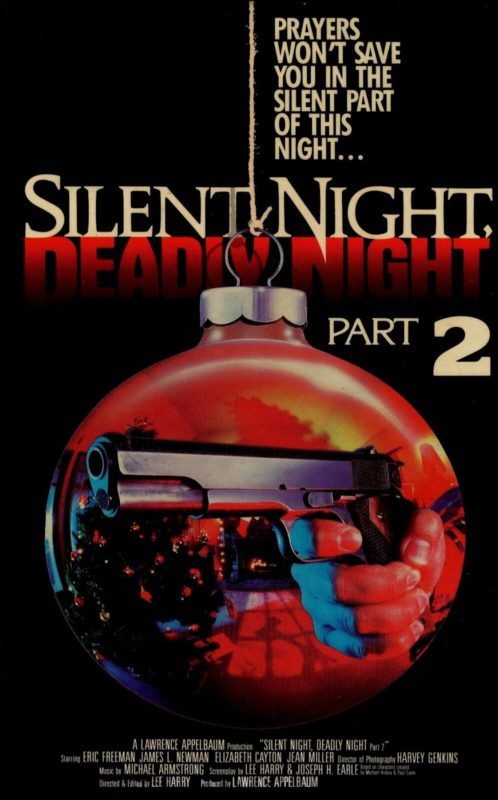