While attending the 2014 edition of the Mad Monster Party horror convention in Charlotte NC, I was lucky enough to get to attend a special sneak peek screening of John Schneider’s upcoming horror comedy SMOTHERED. I also got to talk to the writer director about the project. When I asked him where the wild idea for the movie’s story came from, he indicated he’d originally gotten the idea 20 years before – just a snippet – what if horror actors – usually employed bumping off young women in movies – were themselves getting bumped off by a little blonde coed? The idea sat on his furthest back burner for more than a decade, until Mr. Schneider found himself at a convention in Germany with Richard Brooker (FRIDAY THE 13th PART 3‘s Jason) and several other horror actors. Watching their interactions with their fans, and spending time with Brooker opened up the story for him, and he actively started working on it – with Brooker on board to lead a cast of famed horror stars – who would be playing exaggerated versions of themselves.

Unfortunately, by the time the first draft script was completed, Richard Brooker had passed away. Saddened but undaunted, Schneider proceeded – adding homages to Brooker in the script and offering the lead to Kane Hodder. Hodder said yes and also came on board as an associate producer. They got the money together and shot the movie in Louisiana – and the completed flick saw its first public screening Friday night, March 21st, 2014. 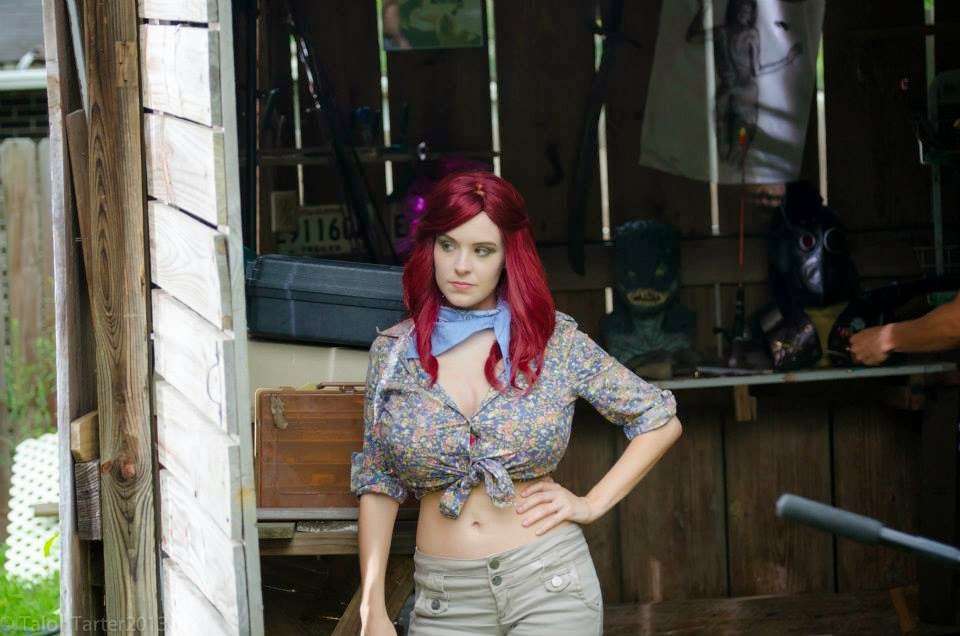 Kane Hodder, R.A. Mihailoff, Bill Moseley, Don Shanks, and Malcolm Danare are among the celebrities attending a small horror convention on Friday the 13th. Attendance is miserable, so when Hodder pops up with the offer of fast money to use their horror status to “haunt” a trailer park and scare its residents – they jump at the promise of $1000 each. When they arrive they meet their employer – the trailer park’s owner – an unpleasant old bat named Agnes (Amy Brassette) – and her much more pleasant (at least to the eye) daughter DD (Brea Grant) – who more than lives up to that name.

As the actors prep their movie shtick to do their terrorizing, they start to fall prey to “accidents” that quickly start dwindling their numbers. The tables have turned. They’ve killed hundreds of people onscreen, but now someone is killing them. Who will survive and what will be left of them? 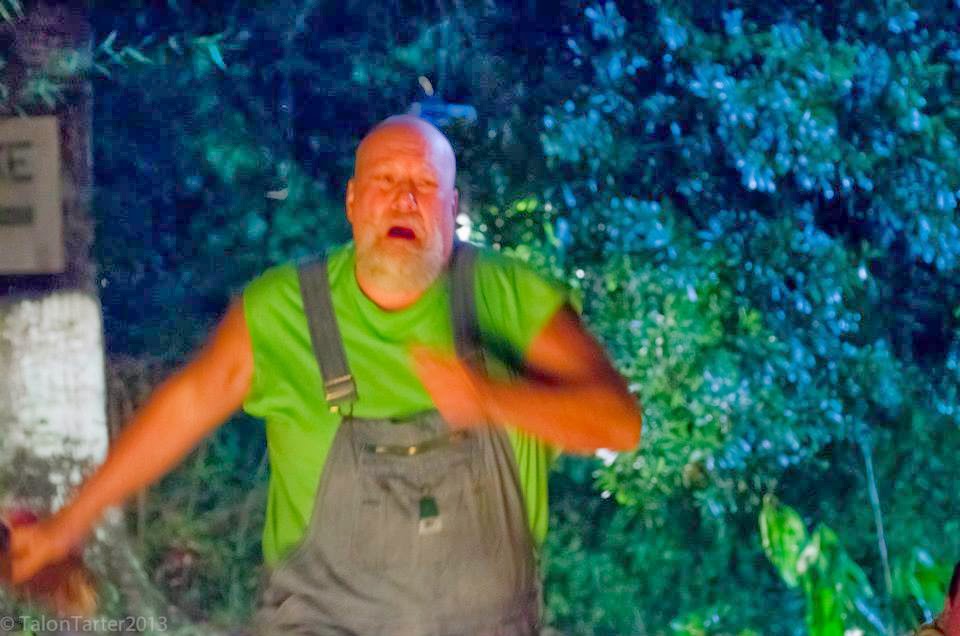 I first heard about this movie when Bill Moseley talked about it in social networking – it sounded really dark from his description. I was intrigued – our erstwhile Bo Duke making a really dark horror movie? I was consequently thrilled to find out the movie was getting its first public screening at a horror convention I was already attending!

I was kind of surprised when the movie immediately established itself as a very quirky horror comedy – and more surprised when Kane Hodder introduced himself onscreen to another character as…Kane Hodder! This – and every other major character’s first appearance – is then underlined with a freeze frame and identifying credit. But what a wild idea – not only are these guys in this movie to provide – and spoof – their horror icon images – but they’re doing it as goofier versions of themselves! The script is very funny – with jokey versions of the actors’ most famous roles – to keep the lawyers at bay. SMOTHERED‘s Hodder is famous for playing “Mason;” the movie Mihailoff for “Quiltface.” Interestingly – Moseley is not playing “Motis” or “Croptop,” but is playing “Teddy” – the movie monster with gloves packed with deadly weaponry – and Teddy doesn’t settle for one hand and razors – he’s got two gloves, with knives, a hypodermic needle, and pistols mounted on his fingers. Hilarious! So, I don’t know if they approached Robert Englund and he declined, or if they just really wanted to get a Freddy parody in the movie – but Moseley really makes the most of the spoofy character in the movie. 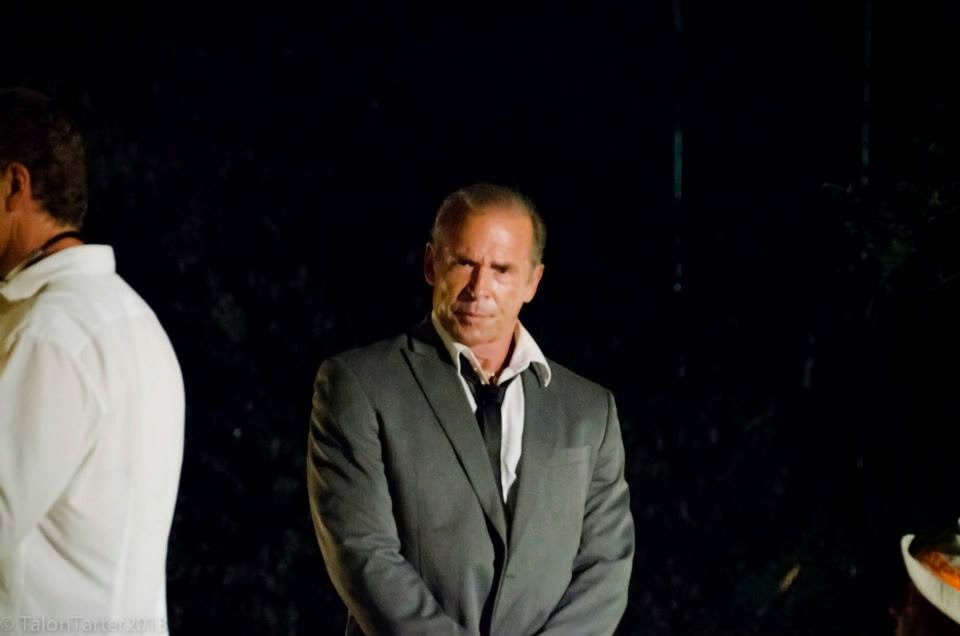 Everybody is up for the game – with extra points to Mihailoff for his twist on himself – and it’s really nice to see these guys acting without four pounds of latex makeup to shlep around. The more familiar actors are also well matched by the supporting cast, with Rhodes, Forrestall, and Grant standing out. Schneider directs well – the movie looks good, especially considering the budget and the amount of night shooting. There are also some very nice makeup and gore effects along the way, and it appears almost all the effects are practical, other than some digital fire.

The screening was well attended, and the crowd seemed to really enjoy the movie. I enjoyed it – but I had a major quibble with the editing. The decision was made to go non-linear, with scenes near the end of the storyline appearing early, scenes that set up the story running in the latter part of the movie, and constant jumps back and forth in time. I can get behind this in some movies – but it had a negative effect here. People die, then continue appearing in the movie as the story jumps back to the previous day. This actually takes away from their death scene. We see a moment from near the end very (too) early on, and it subtracts from the scene’s impact when it comes back around. And the setup of the plot – which is not kept under wraps for any “surprise the audience” reasons (the actors and Schneider talked about it to me and in interviews) – occurs in the last half hour. These three points did not work in the movie’s favor. I think the technique could still be used, it just needs to be reined in a lot. But others may find the jumping around working to the movie’s advantage. 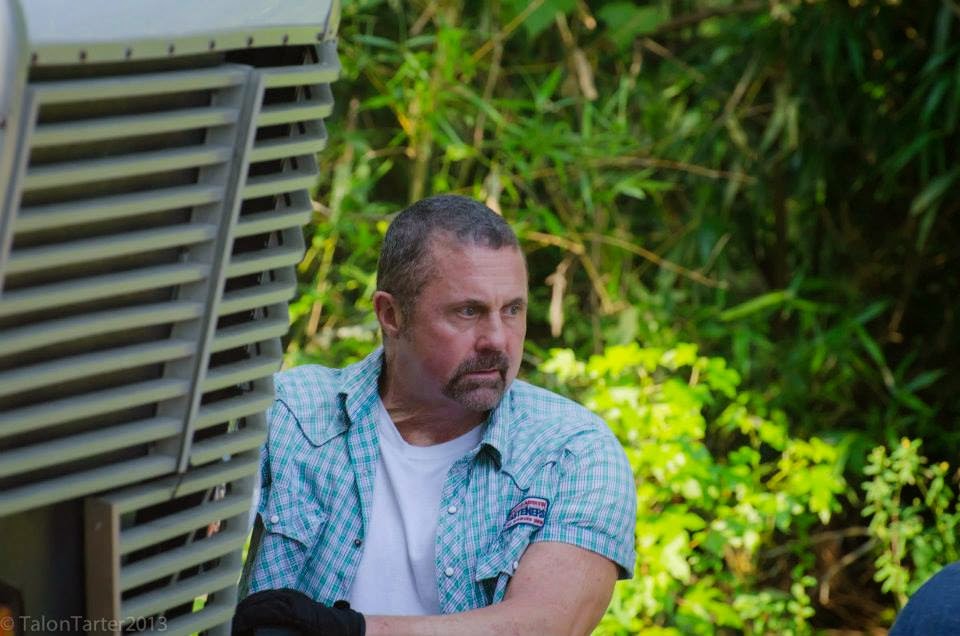 All in all, John Schneider’s SMOTHERED is a very knowing look at horror and horror fandom – definitely an EXPENDABLES for the horror genre- from a rather unexpected source. I wish them the best of luck finding a distributor and hope it rakes in the cash for them – after all – there are scads of other “horror icons” who could be brought in for possible sequels…

This write-up was previously published in a mildly altered from at Craig’s blog, Let’s Got Out of Here! – check it out here!