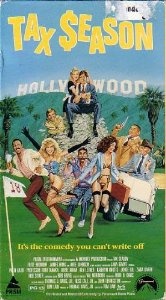 The ‘80s was an era of the occupation-based comedy. A genre popularized by the ‘70s in the forms of M*A*S*H and MOTHER, JUGS AND SPEED, and then stripped of any meddlesome character development and drama through the filter of POLICE ACADEMY, the set-up for the ‘80s low-brow (and usually low-rent) comedy was simple – a straight man enters a new workplace or training facility filled with all sorts of zany characters. Wackiness ensues. The word “Academy” was usually included in the title.

It was our gateway into the myriad of possibilities that different career paths could hold. It’s how we learned about mortuaries, how we felt that we could be ninjas, how we spent our winter vacations. Their cover boxes tempted us with painted portraits of the cast immersing themselves in zaniness in the style of Mad Magazine, often from the artists of Mad Magazine. The format itself is perfectly solid – it’s one utilized by UHF, one of 1989’s more fondly-remembered comedies.

By then, of course, the format was getting a little bit rough. After cops, morticians, ninjas, skiers, stewardesses, nurses, doctors, soldiers and cabbies, where do you go? What occupation was left to make zany?

The answer, of course, is tax accountants. 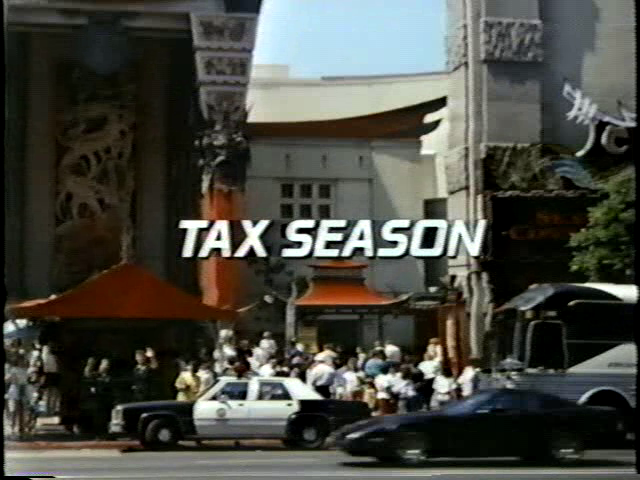 That seems to have been the intention behind TAX SEASON, the sole directorial effort of Thomas Law, and the sole producer credit for Thomas J. Davis Jr. that somehow managed to get distribution from Paramount Home Video (via Prism) before vanishing off the face of the Earth. At least they had the wherewithal to release the film on VHS on April 5, thus allowing them a week of timely rentals for those who were really, really excited about a screwball comedy based around tax returns.

Fritz Bronner stars as Alan Mills, a young man from Cleveland who moves to Los Angeles with his stereotypically loudmouthed mom (Patti Karr) in order to take over Hollywood Tax Service after its owner, Mr. Goldberg, “retires.” Little does Alan know that Goldberg, played by a manic Arte Johnson, is completely insane and is literally captured via butterfly net in the film’s opening sequence in order to be placed in a mental institution after trying to blow up the office’s doors with dynamite and yelling about Flash Gordon. 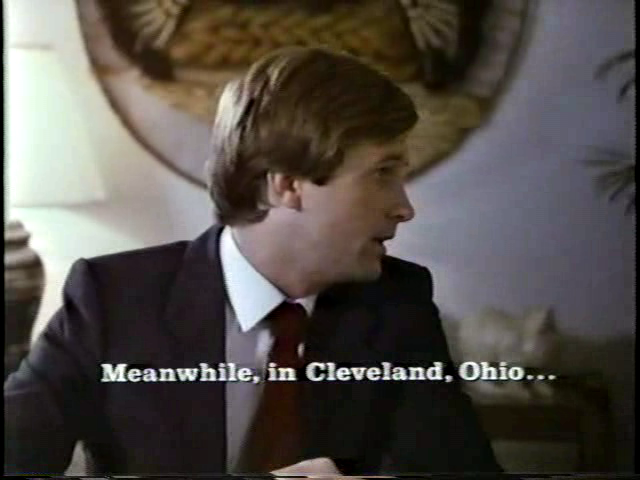 When Alan gets to the office, he meets the wacky crew, who all seem to have been hired after Goldberg went nuts. The secretary Mary Ann (Dorie Krum) is a generic bimbo, sole female accountant Cinnamon Starr (Kathryn Knotts) is actually a prostitute, Jorge (Jorge Gil) only knows Cuban taxes and generally acts like he’s in SCARFACE, token black guy T. William Douglas III (Kerry Ruff)uses the office as a front for his bookie business, and janitor Eli (Al Schechter) is… old, I guess? And to make things worse, his mom keeps calling him to check in! Good thing Myron (Jerry Winsett), the donut-eating fat guy, is on hand to actually work once in a while.

Imagine the shenanigans that this ramshackle gang of misfits could get into! And keep on imagining, as save for a few segments here and there, we don’t get to see what much of the staff at all. Instead, the plot shifts to the Hollywood Tax Service’s main client, Mr. Tagasaki, who uses his fortune cookie enterprise as a cover for cocaine running and who accidentally sends his drug deal-laden books to the office in lieu of his “cooked” ones. 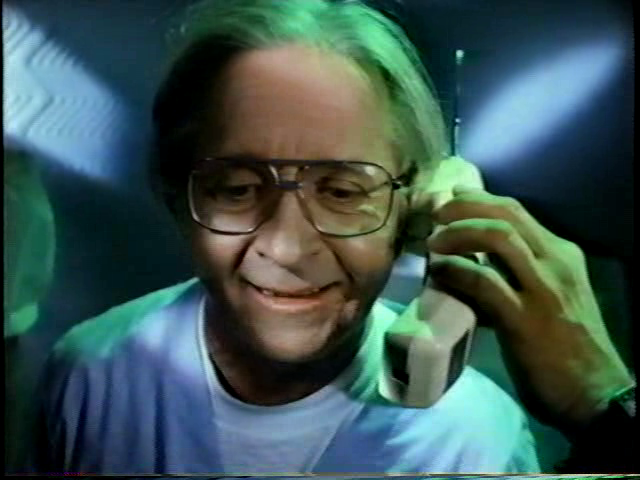 Now, under normal circumstances, basically sidelining the whole premise of the film might be a bad idea. But in TAX SEASON, this isn’t the case, because Mr. Tagasaki is played by veteran actor James Hong.

I’m of the firm belief that any film, no matter how bad, can be made better by the addition of James Hong. 1996’s SOUTH BEACH ACADEMY, for example, would be a completely unremarkable T&A flick were it not for Hong in a supporting role, camping it up, impersonating Michael Jackson and generally looking like he’s having a great time. Hong can never be accused of “phoning it in,” no matter how low-rent the movie he’s in is – he’ll give his all in GHOST ROCK or NINJA III just as he would in BLADE RUNNER and CHINATOWN. It’s no wonder he’s worked consistently for nearly sixty years – the guy’s just a force to be reckoned with. 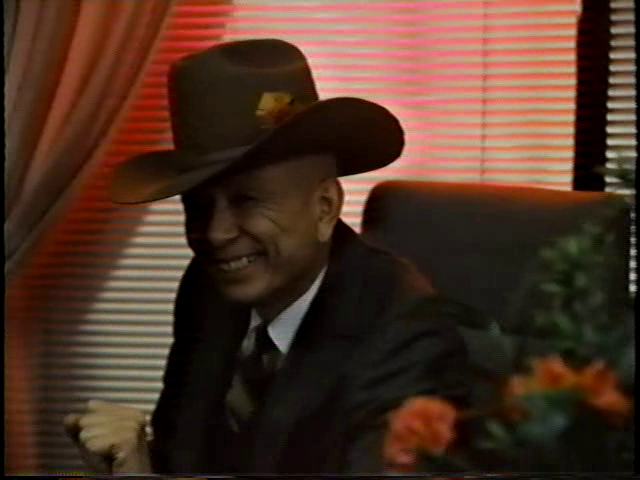 TAX SEASON is no different. A relatively generic mob boss character in other hands, Hong gives everything he’s got to the role, donning a cowboy hat, talking to a picture of John Wayne in his locker and christening himself the “Cocaine Cookie Cowboy.” He mercilessly orders around sidekick Professor Toru Tanaka (!) and keeps all his evil doings from his secretary, the blonde Susie. He also mildly sexually harasses her, which would be gross and icky, but it’s James Hong!

It’s a good thing Hong’s around, because the script leaves the humor up to the cast to do any of the heavy lifting. The film’s idea of humor is people confusing Cincinnati with Cleveland and Jorge yelling in Spanish, and the second half of the film is more of a lightweight thriller as Alan and Susie attempt to prove that Tagasaki is, indeed, a drug dealer. Law’s direction is competent, though there are plenty of boom mikes, something that could be excused by a crummy VHS transfer if the filmmakers were deluded enough to think that this would reach theaters. 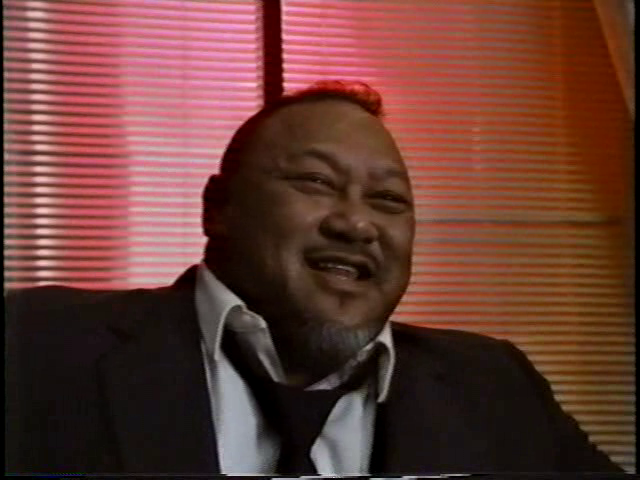 In contrast to last week’s EXQUISITE CORPSES, which utilized New York City’s experimental art scene was a way to provide an interesting look at the city, TAX SEASON is pure, stereotypical Los Angeles, from the lazy music montage that opens the film in which certain shots appear multiple times to virtually everyone in the film being self-involved and vapid save for the transplants. A pair of Hispanic guys take off with all of the Mills’ furniture. Buff guys on roller skates look at the suited Alan with a sneering eye or a flirting wave. Everybody is all crazy and freaky! It’s Los Angeles! Or at least, Los Angeles through the eyes of someone that doesn’t like Los Angeles.

The finale includes a goofy golf cart chase, a pair of bumbling henchmen and a cheery security guard with the hots for Susie, but there’s not a whole lot to describe as “funny,” and the other employees vanish for most of the second half of the film. We also get a ridiculously ‘80s theme song (“There’s no money in my bank account/and all my debts are starting to amount/I can’t believe she’s leavin’/must be because tax season”) by Larry Weir, who also performed the memorable music from TEEN WITCH the same year, which makes me long for the days of every movie having a theme song, no matter how inappropriate. 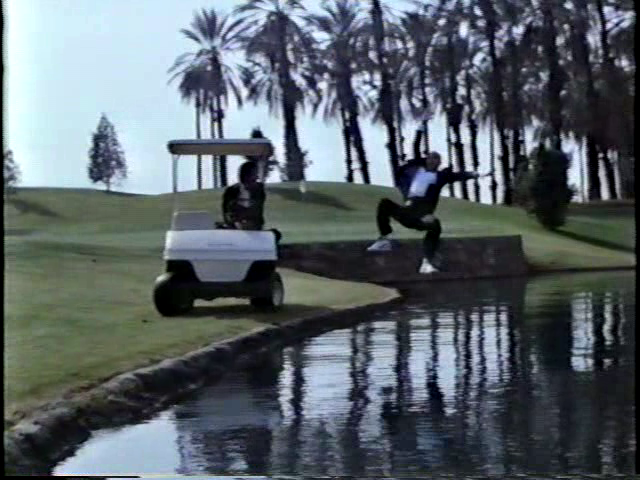 TAX SEASON seems so half-assed that I wouldn’t be shocked if its mere existence weren’t some sort of meta tax dodge in itself. One of the other producers is timeshare mogul Keith Trowbridge, and the film really feels as though they came up with just enough of a concept to put a movie together and absolutely no more. (I’m not even fully convinced the Arte Johnson scenes were shot as part of this film.) There’s no nudity, either, most likely because that would have involved paying actresses a higher wage. It’s a comedy that sets up a premise and then doesn’t bother to do anything at all with it – there’s not even a clever note of satire that the likes of tax-coms like HARRY’S WAR and PERSONAL EXEMPTIONS have. It feels like a film made with the least possible effort.

Except for James Hong, who always brings his A game. (And Weir’s enthusiastically silly title track.)