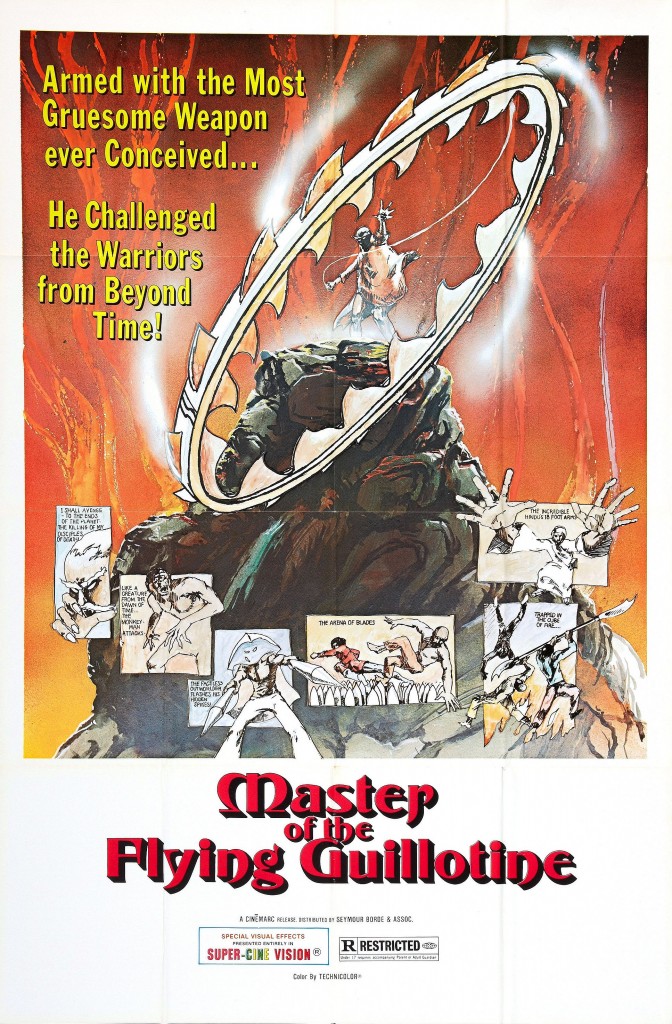 The title character of THE ONE-ARMED SWORDSMAN was introduced in the film of the same name in 1967. As the lead actor, Jimmy Wang Yu originated the character, called Fang Cheng, who loses his right arm to a disagreement with the daughter of his master and must learn on his own how to innovate a one-armed fighting technique. Like Jimmy Wang Yu himself, the One-Armed Swordsman was known by many names in subsequent adventures (in RETURN OF THE ONE-ARMED SWORDSMAN his name is “Fang Gang”) — MASTER OF THE FLYING GUILLOTINE is technically a continuation of the adventures of the title character from Jimmy Wang Yu’s 1971 film THE ONE-ARMED BOXER, but I’m not sure it matters. You could go crazy trying to parse the logistical details of some of these movies, and that’s not why anyone comes to see them anyway. It’s the ass-kicking, silly goose.

By 1976, Jimmy Wang Yu was writing and directing the movies he starred in. MASTER OF THE FLYING GUILLOTINE is alternately known as ONE-ARMED BOXER 2 (which, spoken out loud, has a pleasing rhythm to it) or ONE-ARMED BOXER VS. THE FLYING GUILLOTINE (which sounds like a misnomer but is fairly accurate — the Boxer fights the weapon as much as he fights its wielder). As this film opens, our hero is now a full-on master, running his own school, when the bad guys come a-calling.

If we are to be completely honest, MASTER OF THE FLYING GUILLOTINE is not always as fun to watch as its finest moments.  It’s not remotely as polished as a comparable action vehicle like ENTER THE DRAGON, and the score (which consists in parts of re-purposed German electronic music) is occasionally unpleasant, depending on your personal sonic preference.  We’re a long way from the jazziness of Lalo Schifrin here.

Still, just try to resist the central idea: A one-armed martial-arts master (the aforementioned Jimmy Wang Yu) is drafted into a lethal tournament where he must ultimately confront a blind wizard (Kam Kong) who wields the most coldly efficient hand-held decapitation instrument of all time. 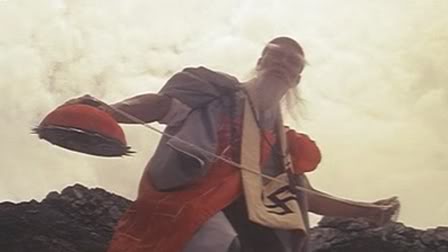 Couple things to address here about good old Fung Sheng Wu Chi: First, that troubling symbol on the assassin’s cloak is not exactly what it looks like. What we now recognize as the swastika was originally a Buddhist symbol of good fortune before being co-opted in the West. The Nazis ruined everything, as Nazis are wont to do.

That said, it’s not like the guy wearing it in the movie is a very nice man. While he can’t personally see, he can toss that nasty weapon he’s carrying with lethal accuracy. The flying guillotine doesn’t resemble a traditional guillotine. That would be impractical. It’s basically a beanie its owner flings onto the cranium as adversaries. The blades in the dome latch onto the poor unsuspecting head so Fung Sheng Wu Chi can easily yank them off.

MASTER OF THE FLYING GUILLOTINE is a fast-moving fight film with a casual savagery that stands out in a genre not known for quiet contemplation. The tournament scenes take up the majority of the running time, and at that point the movie can feel as much like sports as fiction, with its violent monotony and repetitive patterning. (A thrilling highlight are the fleet fights that take place atop ominously-placed bamboo stalks.) 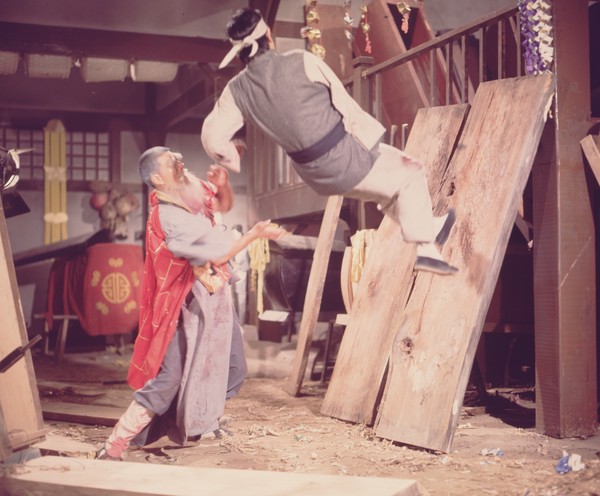 The influence of this film upon the video games of the 1980s and 1990s is incalculable. Did you play Street Fighter 2 for hours and days in the 1990s?  Do you know that this is where they lifted everything from? At least everything remotely good and interesting.

Even after many years of pretenders lifting the coolest moments from it, still you’ve gotta see this movie to believe it – it’s worth it if only for the quote-unquote Indian fellow with the extending arms, played by Wong Wing-sang. For one thing, American film had largely abandoned blackface by the 1970s, but the Chinese had apparently not. For another, just look at those special effects.

MASTER OF THE FLYING GUILLOTINE is playing Tuesday night in Manhattan at the most appropriately highbrow venue in the city, at Lincoln Center. [Buy tickets here, if any are left!] Jimmy Wang Yu himself will be in attendance, to receive the New York Asian Film Festival’s Lifetime Achievement Award. Author and organizer Grady Hendrix (whose latest book you really must read) will be hosting a discussion before the film with the man who made it happen. Rejoice that he did. For more on Jimmy Wang Yu, check out this prehistoric Daily Grindhouse piece on THE ONE-ARMED SWORDSMAN.