His work, his style, and his passion were legendary. Dan O’Bannon passed away just over a year and  half ago after a long battle with Crohn’s Disease. O’Bannon’s work included DARK STAR, ALIEN, TOTAL RECALL, HEAVY METAL, and of course his masterpiece of horror RETURN OF THE LIVING DEAD. Stuart Gordon is equally well known to genre fans, he banged out his share of cult classics in the 80’s: RE-ANIMATOR, FROM BEYOND, DOLLS, and more. In an exclusive interview with his wife Diane, DG learned that Dan O’Bannon has several un-produced pieces of work that are waiting to find some dollars. One project has been picked up though and is set to begin filming early next year. Get ready for Stuart Gordon to direct a script from Dan O’Bannon.

Here is an excerpt from our interview

landing tomorrow on THE WIRE:

DIANE O’BANNON: Well I have two scripts of Dan’s that I am working on. Stuart Gordon is directing THE MEN, probably beginning next year and that’s a project that’s really pretty firm. Looks like it’s going to be shooting in Europe. It’s a men are from mars women are from venus type film. A woman discovers Earth was conquered by aliens and then realizes that they’re still here. The one I am prepping now is PAIN CLINIC, I am hoping to take that out in October, and that one is the last screenplay Dan was working on. 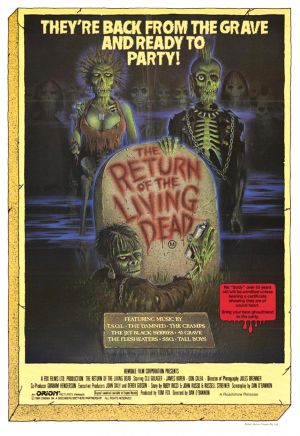 Dan decided it was impossible to get these giant films like ALIEN made. You just can’t get the budget for that very easily and he wasn’t successful with some of his scripts that would have been moderately budgeted at 25-30million. So he started writing really low budget horror. Good horror that could be done at a low budget. Something that could tingle your spine but could still be made at a low cost. More psychological than slashing and goo.

DG: And what’s PAIN CLINIC about?

DO: It’s about a guy who has back pain and seeks help for it but then gets caught up in this pain clinic, he was really inspired by his own illness and how you could become trapped in your own body. He imagined a horrible scenario where you think you are getting the right treatment but you meet up with the wrong doctor.

So there you have it from Mrs. O’Bannon. Even from the grave he is working on his next classic. You just can’t keep a good zombie down.

Check out more tomorrow in our exclusive interview.