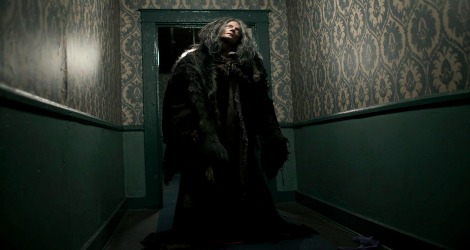 SXSW is unleashing their midnight movie lineup, which they appropriately call “Midnighters”, and it’s chalk full of vampires, witches, sex, and one sequel to a dead format (any guesses?). This is a solid list of flicks so all of you up to no good when the clock strikes 12 are going to be in-store for all kinds of cool. Here’s the list:

Big Ass Spider!
Director: Mike Mendez, Screenwriter: Gregory Gieras
When a giant alien spider escapes from a military lab and rampages across the city of Los Angeles, it is up to one clever exterminator and his security guard sidekick to kill the creature before the city is destroyed.
Cast: Greg Grunberg, Lombardo Boyar, Clare Kramer, Ray Wise, Lin Shaye, Patrick Bauchau

Haunter (Canada)
Director: Vincenzo Natali, Screenwriter: Brian King
Lisa Johnson is one day shy of her 16th birthday and will be forever. She and her family are doomed to repeat the fateful day before they were all killed in 1985.
Cast: Abigail Breslin, Stephen McHattie, Peter Outerbridge, Michelle Nolden, David Hewlett
(World Premiere)

Plus One
Director: Dennis Iliadis, Screenwriter: Bill Gullo
When the party of the decade is disrupted by a supernatural phenomenon, the night soon descends in to chaos.
Cast: Rhys Wakefield, Logan Miller, Ashley Hinshaw, Natalie Hall

The Rambler
Director/Screenwriter: Calvin Lee Reeder
After being released from prison, a man known as The Rambler stumbles upon a strange mystery as he attempts a dangerous journey through treacherous back roads and small towns en route to reconnecting with his long lost brother.
Cast: Dermot Mulroney, Lindsay Pulsipher, Natasha Lyonne, James Cady, Scott Sharot

You’re Next
Director: Adam Wingard, Screenwriter: Simon Barrett
A fresh twist on home-invasion horror. A gang of masked murderers descend upon a family reunion, and the victims seem trapped…until an unlikely guest proves to be the most talented killer of all.
Cast: Sharni Vinson, Nicholas Tucci, Wendy Glenn, AJ Bowen, Joe Swanberg

For all the information on this years SXSW film festival click here.