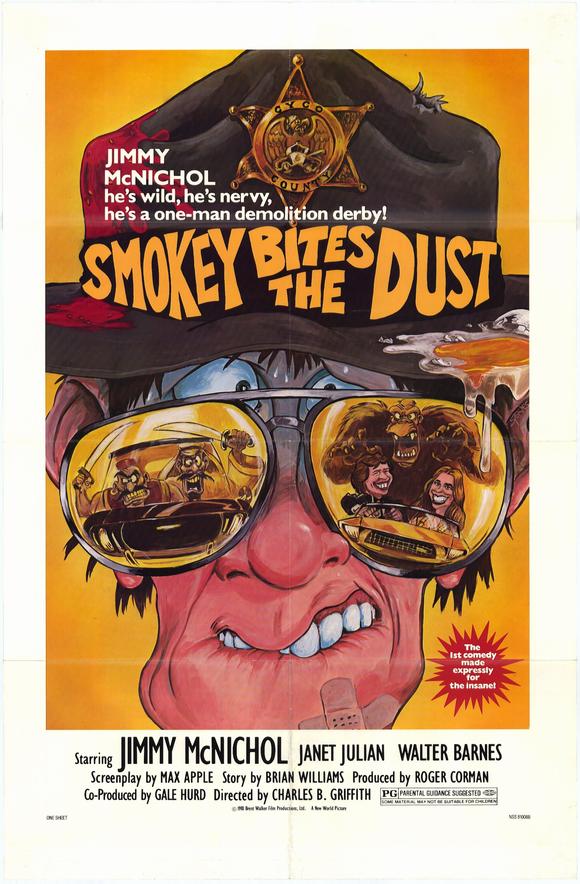 Back in the halcyon days of 1981, you’d have been hard-pressed to find two more popular slang terms in the English language than “Smokey” — a catch-all euphemism for any and all members of our nation’s law enforcement community — and “bites the dust” — which meant, of course, to get killed. The first was popularized, at least on a mass scale, by Burt Reynolds, the second by Freddie Mercury. Both guys sported the kind of mustaches that would be considered pretty fucking cheesy by today’s standards but were thought to embody the hairy apex of machismo at the time, and near as I can determine — unless you know some salacious details about Burt’s personal life that I’m not privy to — that’s where any similarities between the two end.

Leave it to Roger Corman to come up with the idea of mashing up these two then-current reigning champions of populist vernacular and figuring he could make a movie out of it somehow. The problem, however, with SMOKEY BITES THE DUST is that, beyond the title itself, nobody bothered to put any thought into it at all. 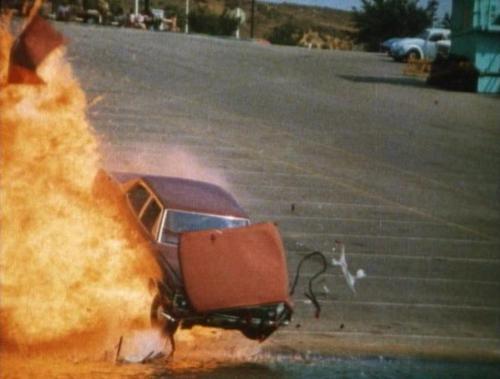 The stills accompanying this review really tell you all you need to know about what’s going on here, but for those of you who absolutely must read a plot recap of some sort in any piece of — and I’m being generous with my own writing here, I admit — “critical analysis,” here’s the deal : backwoods Ozark knuckle-draggin’ hick Roscoe Wilton (Jimmy McNichol) has a thing for stealing cars and smashing ‘em up cuz’ it shore is a durn good time. Just a good ol’ boy never meanin’ no harm, right? Unfortunately for him, the ball-busting Sheriff Tuner (Walter Barnes) is out to ruin his fun whenever and wherever possible. Fortunately for him, Turner is, of course, a complete idiot, a bungling nincompoop of a predator can never catch up with his prey. To further complicate matters — not that the word “complicated” really applies to this flick in any way, shape, or form — Roscoe’s got the hots for the sheriff’s daughter, Peggy Sue (Janet Julian), and he figgers it’d be a real holler to kidnap her on homecoming day at the local high school. Again — all in good fun, innit?

Needless to say, slack-jawed yokel sheriff doesn’t take well to the idea of the town hooligan making off with his precious lil’ angel, and soon — for reasons that make even less sense than those offered in the average Corman production — cops from not only all over the country, but apparently all over the world (watch for a couple of “comic relief” Arabs) are brought in to rescue darling Peggy Sue (who — shocker! — finds herself falling for the “charms” of her abductor) and drag Roscoe, kickin’ and screamin’, into the county lock-up once an’ fer all.

Really, though, this movie’s raison d’etre is to show a bunch of junked-out old cars getting smashed up and, when that gets too predictable (which takes all of about five minutes), exploding in flame. If that sounds like your idea of a good night in front of the tube, then I guess you’ll find SMOKEY BITES THE DUST to be a reasonably amusing little time-waster, but honestly — you’d be much better off watching old demolition derby-type footage, and that would probably offer more by way of an involving plot, to boot. 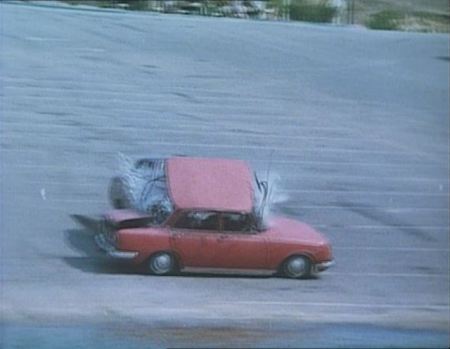 Still, if there’s one thing — and I should stress here it’s one thing — I found rather charming about this idiotic mess of a film, it’s that director Charles B. Griffith takes the “idiot cop” stereotype so popular at the time to absurd, self-parodying heights, and God help me if that doesn’t fill this reviewer with a warm dose of nostalgia. Today, of course, the boys in blue are pretty much always portrayed as “heroes” in the popular media, and even the most flagrant excesses and abominations these guys commit on screen are shown in a sympathetic light — after all, these are the good guys, and sometimes you gotta go to extremes to protect “us” (meaning God-fearin’ middle-class Christian white folks) from “them” (everybody else). If they gotta cut a few corners, bust a few heads, and wipe their asses with the US Constitution along the way, well — it may not be pretty, but it’s all in a day’s work, and it’s all for our own good.
Not to put too fine a point on it, but fuck that. Ever since the days of the Keystone Kops, the most common representation of “the fuzz” in movies and TV was one of a bunch of bumbling morons who couldn’t even tie their shoelaces, much less catch the guys they were after. It was a comedic distillation of the all-American anti-authoritarian spirit in its purest form, and it really did reach its zenith with the “CB craze” films of the late ’70s such as SMOKEY AND THE BANDIT and CONVOY. So what happened?

Well, it’s hard to put a finger on any one event in particular, but I would say that the hard turn to the right ushered in by the election of Ronald Reagan effected a none-too-subtle transition in how not just how our popular media, but our national culture in general, viewed all forms of police officers. Sure, there were always guys like Dirty Harry, but there were a dozen movies that made fun of the cops for every one of those back in the day. By the mid-’80s, however, that ratio was completely reversed — and I would argue that we’re definitely worse off for the change. Still, I guess that’s another topic for another time — suffice to say, it makes for a fun trip down memory lane to see a movie in which the cops are openly targeted as figures worthy of ridicule and disdain. 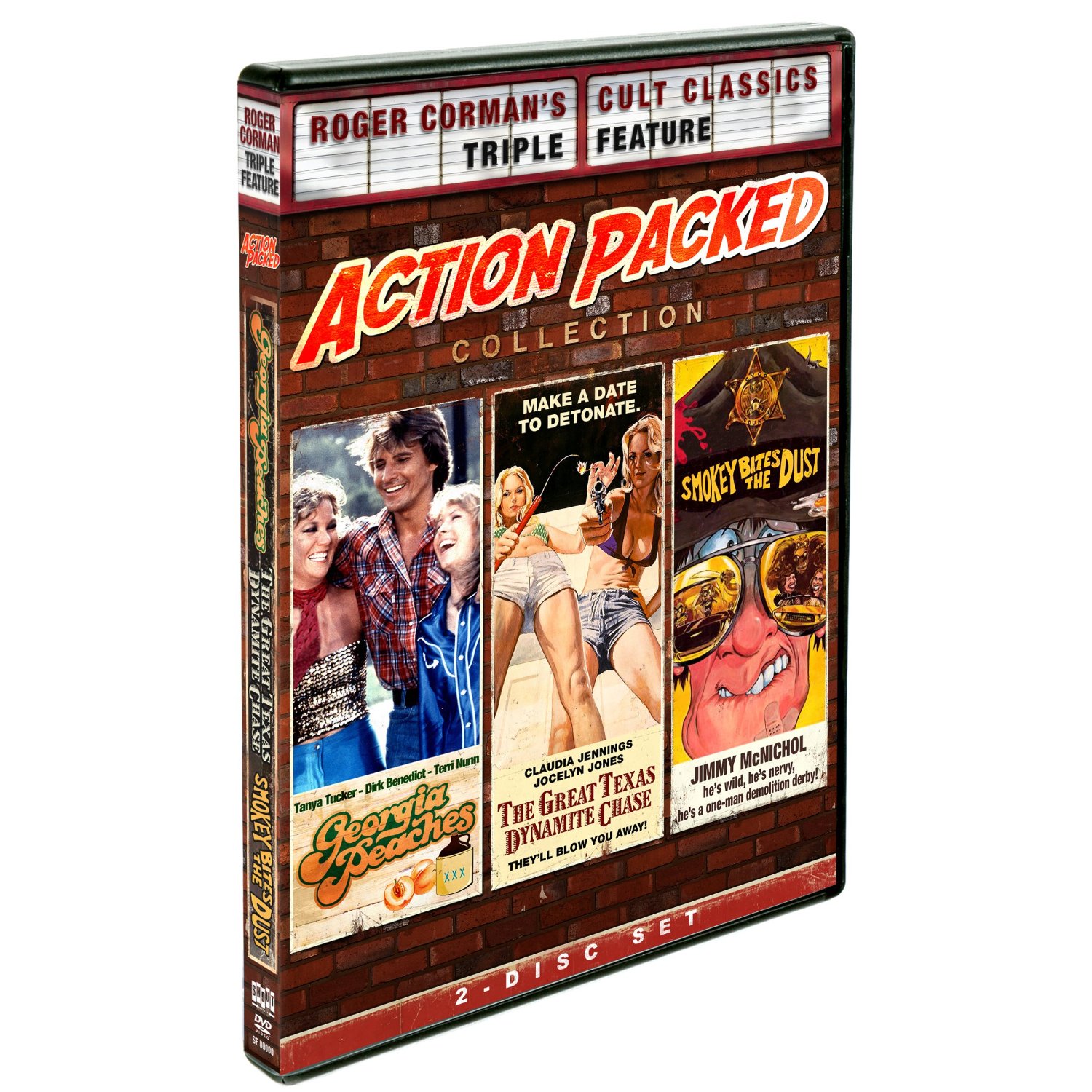 Honestly, though, that really is all SMOKEY BITES THE DUST (which is available on DVD from Shout! Factory, packaged together with GEORGIA PEACHES and THE GREAT TEXAS DYNAMITE CHASE) has going for it. Not even an early appearance from William Forsythe and cameos from always-terrific Corman stalwarts Dick Miller and Mel Welles can save this jumbled mess of pointless, plotless garbage, so I’ll leave you with this thought to ponder over just for the sake of establishing myself as the first critic in history to ever extrapolate a philosophical question from this flick : Smokey Bites The Dust, translated into actual, Oxford Dictionary-approved English, literally means A Cop Gets Killed. To the extent that the American public even noticed this movie at all, they viewed it as being harmless, stupid, goofy fun — yet 15 years after it came out they crucified Ice-T (in his “dangerous,” pre-reality show incarnation) for saying exactly the same thing. Why the difference?