Good news, everyone! (Well, unless you’ve got a reference book that needs updating!) Reports of the death of Chester Novell Turner, the mad genius auteur behind the shot-on-video classics BLACK DEVIL DOLL FROM HELL and TALES FROM THE QUADEAD ZONE, have been greatly exaggerated! While it was rumored that Mr. Turner, who seemed to vanish off the face of the Earth after the jaw-dropping QUADEAD, had died in a car accident in 1990, the folks at Massacre Video, in preparation to release his two films on DVD in 2013, have discovered that his condition has, in fact, been upgraded to “alive!” 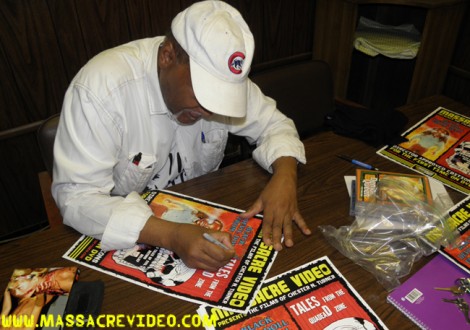 Well quite honestly, I have been looking for Chester since I saw the film…even before Massacre Video. The first time I saw Black Devil Doll from Hell, I was just enthralled by the film. It was a true diamond in the rough and I needed to know how it was made/who made it!

8 years later I oddly by chance found him, I called him up and asked if he was the man whom made Tales from the Quadead Zone and Black Devil Doll from Hell!

Chester honestly was extremely happy, no one has contacted him about these films in over 20 years. He is going to be a BIG part of the DVD release and give the story behind each film.

It’s been just over 26 years since Quadead was made and almost 30 since BDDFH was made, Chester is still extremely happy and proud of both films. Just talking to him he put in a lot of work and he embodies the DIY spirit I love so much!

Here are some notes on the release, from their website:

This is amazing news for fans of shot-on-video films, regional filmmaking, horror and outsider art as a whole. Follow Massacre Video via their Facebook page here, and rest assured we’ll be watching this title with baited breath.