Mike “McBeardo” McPadden will be previewing his upcoming tome, Teen Movie Hell: A Crucible Of Coming-Of-Age Comedies From Animal House To Zapped here at Daily Grindhouse with a series of articles on the teen sex comedy craze of the ’80s. This week, we count down the TEEN MOVIE HELL FAT GUY HALL OF FAME!

As Homer Simpson famously deduces on the beloved John Waters episode of THE SIMPSONS, only two kind of fashion plates are naturally drawn to Hawaiian shirts: “Gay guys and big, fat party animals!”

The following article is not about gay guys. It does, however, incorporate no dearth of Hawaiian shirts (particularly in multiple-XL sizes).

Among teen sex comedy archetypes, the hefty gentleman ranks high—and way heavily—among the most often employed and most emphatically enjoyed. Be they portly party animals, roly-poly nerds, plump chumps, or tub-o’-guts best buddies, if often feels as though no coming-of-age film is complete with one male character whose girth directly relates to the movie’s mirth. Let us now enshrine the most formidable of such performers, ranked by rotundness. Roll out the barrel-shaped bodies! 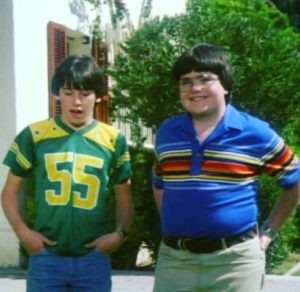 Estimated Heft: About 10 of those provolones hanging up at the pork store.

Bonus Blubber: The Double P’s effortless expertise in embodying a Brooklyn-accented “goombah” stereotype does raise fun joke-making opportunities about his, ehhh, possible “connections” to perhaps maybe some muscle that might have somehow in theory helped PRIVATE LESSONS get made (which is not true—the movie was financed by TV game show kingpins Jack Barry and Dan Enright, wisely rolling over the fortunes they reaped from THE JOKER’S WILD). 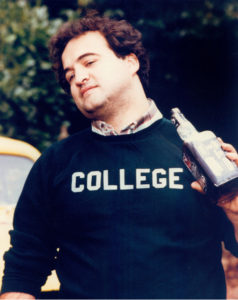 Shows His Boobs?: No. Toga is strategically placed. 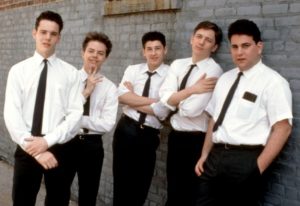 Estimated Heft: Around the same as the St. Basil statue he and his Catholic crew have to scrub with their toothbrushes.

Shows His Boobs?: Nobody in HEAVEN HELP US shows boobs. Even the statues are covered.

Bonus Blubber: Danare speaks as though his inner-tube mid-section is crushing his testicles. 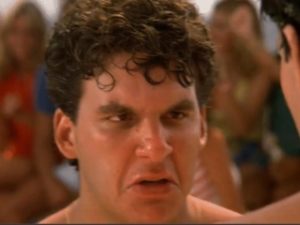 Shows His Boobs?: Yes—although he’s rather stunningly in shape up in the pec department.

Bonus Blubber: Larry David’s future sidekick on CURB YOUR ENTHUSIASM and the howling dad on the ABC sitcom THE GOLDBERGS struts forth in SPRING BREAK looking more Hulk than bulk. Garlin plays Gut Gut, the undisputed champion of competitive high-dive belly flopping, and he aptly demonstrates how he came by the title by delivering maximum splash. If there’s ever a SPRING BREAK follow-up, Garlin could perhaps return but, given his more mature physique, perhaps he’d now be called “Gut Gut Gut.” 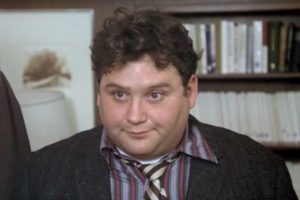 Meatiest Role of Fat: Flounder in ANIMAL HOUSE (1978), a part he got by taping his headshot inside a pizza delivery box that made it inside NATIONAL LAMPOON publisher Matty Simmons’s office—somehow.

Destroys and/or Devours: Neidermeyer’s horse; too many cocktail wieners at the Omega House mixer; his older brother’s slick roadster; every squadron of the Faber College ROTC via 10,000 marbles.

Bonus Blubber: The highest-profile and hardest working fat guy of the classic teen sex comedy era, Furst played variations on the sweet-natured, pratfall-prone Flounder in SWIM TEAM (1979), MIDNIGHT MADNESS (1980), GETTING WASTED (1980), NATIONAL LAMPOON’S CLASS REUNION (1982), and the cops-against-the-hippies football TV movie PIGS VS. FREAKS (1984). Furst’s other most prominent portrayal, however, occurred in UP THE CREEK (1984). The raft race comedy reunited him with ANIMAL HOUSE co-star Tim Matheson and, this time, the once-and-forever Flounder got to act, eat, and bombastically debauch like Bluto. 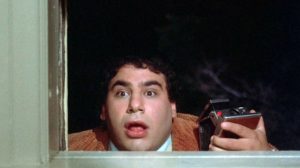 Destroys and/or Devours: The shoulders of his two pals he sits on to peep in on a second floor window; any grace and dignity associated with drag performing. 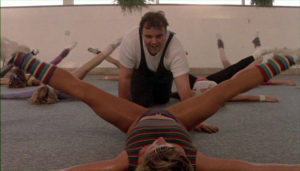 Estimated Heft: 20 of the bowling balls into which he gets his dick stuck. 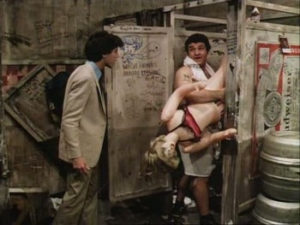 Bonus Blubber: DiSanti was fully 40 years old when he brought Grossout to such grandiose, guttural life. He enjoyed a far more prolific career than you might expect. Before KING FRAT, DiSanti appeared in LENNY (1974) and as “Gay Thief” in the Dom DeLuise laffer HOT STUFF (1979), and he worked regularly in character roles up until the late ’90s. 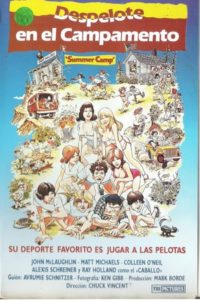 Estimated Heft: The entire rest of the cast of SUMMER CAMP combined (’twas the cocaine ’70s)

Destroys and/or Devours: As much product-placement beer as can be imagined; what must add up to a mile of submarine sandwiches; the notion that nobody can pull off a plaid flannel shirt in the summertime.

Bonus Blubber: Ray Holland’s career spans just four films, but sexploitation giant Chuck Vincent directed two of them, so he retired with a .500 batting average for sure. The first is SUMMER CAMP; the other is HOT T-SHIRTS (1980), wherein Holland shifts from the wrecking ball confidence of Horse to believably playing a mild-mannered virgin who hits it big, and pops his cherry, after opening a wet t-shirt joint (such places actually existed at the time, at least for a few seconds—then they usually added Foxy Boxing). 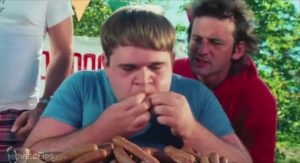 Estimated Heft: Same as “The Stomach,” just scrunched down shorter.

Shows His Boobs?: No. And if he were suddenly rendered shirtless, he’d likely grab Spaz and use him as a bra.

Bonus Blubber: Has his pants literally run up a flagpole; went on to play punk bruiser Barnyard in CLASS OF 1984 (1982). 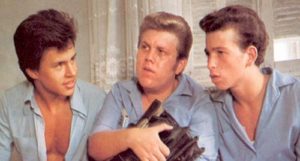 Meatiest Role of Fat: Yudale aka Huey in the LEMON POPSICLE series

Estimated Heft: All the hummus in Tel Aviv (spread out over eight movies).

Destroys and/or Devours: Seemingly every chubby chasing female in the Middle East.

Bonus Blubber: Zachi Noy’s LEMON POPSICLE role was taken over by the great Joe Rubbo in the American remake, THE LAST AMERICAN VIRGIN. We can only hope these intercontinental titans of obesity have had the change to break bread—and every other consumable substance in sight—together. 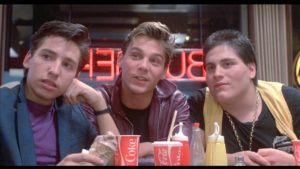 Meatiest Role of Fat: David aka “Big Burrito” in THE LAST AMERICAN VIRGIN (1982)

Destroys and/or Devours: Piles of hamburgers; Sweet’N Low passed off as cocaine; his own crotch when he gets crabs; big burritos.

Shows His Boobs?: Repeatedly, and never more gloriously than when bedding the Latina lust-bomb who initially christens him her “Big Burrito.”

Bonus Blubber: He absolutely equals his Last American Virgin fat guy fantasticness as a summer employee at Mexican resort in HOT CHILI (1985). Just watch in awe as Joe runs away from a bull and toward the camera as CHILI’s end credits roll—you know he’s thinking about every cheeseburger he ever had (that day), as well as the one’s he’s yet to have (also that day, if he lives). Plus, Joe Rubbo is the single greatest fat guy name of all time! 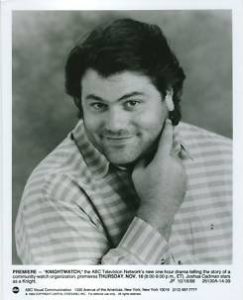 Destroys and/or Devours: A chain-link fence; a hard top Cadillac he converts into a convertible; a genuinely stomach-churning mountain of toxic beach trash

Shows His Boobs?: No, even though nothing would rule harder than Cadman doffing his top, making his torso bounce, and bellowing his catchphrase “Bow-Bow!” 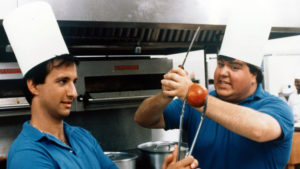 Estimated Heft: Every Good Burger ever photographed, mentioned, or dreamed of, piled in a series of wheelbarrows.

Destroys and/or Devours: All previous heights of greatness in the portrayal of bombastically nerdy big fellas.

Bonus Blubber: Schneider brilliantly embodies another rotund archetype as near-wordless, perilously pent-up mama’s boy Ricky Smith in BETTER OFF DEAD (1985). He also played Dennis on TV’s HEAD OF THE CLASS (1986-91), and co-created and starred in the Nickelodeon series GOOD BURGER—really living the fat guy dream like few others. 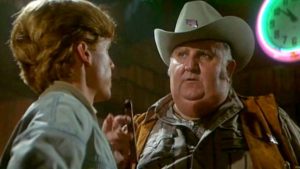 Meatiest Role of Fat: Porky in the PORKY’S series

Destroys and/or Devours: The dignity of spoiled Angel Beach High School boys, who in turn destroy his livelihood and community—in two different movies.

Shows His Boobs?: No. But everything’s negotiable in Porky’s Pen.

Bonus Blubber: Chuck also turns in an iconic teen comedy performance as Rocko, the swine-snout-hatted proprietor of Pig Burgers, in BETTER OFF DEAD (1985). The man had found his calling and oinked up to gluttonous glory.