And we’re back, by popular demand. If you’re just joining us, this is what we’re up to: In an attempt to help you, our beloved readers, get to know us, your Daily Grindhouse staffers and contributors, a little better, we thought we’d pose and answer a big important movie-type question.  Please feel free to join us in the comments with your own two cents and a bag of chips. So here’s this week’s question:

What was your favorite non-2014 movie you saw for the first time this year?

It’s only a couple of years old, but few films excited me in 2014 more than Jeremy Gardner’s THE BATTERY. Inventive, brave and beautifully directed and acted, it’s proof of the exact sort of ethos I hope all micro-budget directors follow. A low budget is permission to take chances, and Gardner isn’t afraid to take what could have been a bog-standard zombie movie and take it in incredibly surprising directions. It marks the arrival of a massive talent, and I absolutely can’t wait to see what he has coming next.

THE BATTERY is on my short list. As for me, after 34 years I finally sat down and watched THE GODFATHER trilogy for the first time. Even having seen them referenced and parodied over the years, the original still stuck with me; what a great film. On the other hand, I felt the second was just ok [Mike is on his own with this one… — Ed.] and the third was not as bad as people say. I do have to agree that it’s best Sofia got into directing.

I resisted seeing William Friedkin’s SORCERER until I could do so in the best manner possible. His remastered Blu-Ray of the film proved the perfect occasion, and it did not disappoint. What a nail-biter! Charlie Chaplin’s brilliant CITY LIGHTS was another longtime need-to-see that I finally got around to, as was Steven Soderbergh’s KING OF THE HILL. Both movies lived up to their esteemed reputations. And now that I think about it, 2014 also brought my first ever viewing of David Lynch’s ERASERHEAD. This is another one I held off on until I could get a pristine copy. The Criterion Collection made that possible this year. Perhaps needless to say, it’s a brilliant, confounding, dazzling, eerie piece of work. I will never look at a pencil eraser the same way again.

The top pre-2014 movies that I saw that also fit on The Daily Grindhouse is an odd Venn Diagram. The best of them what fit in that intersection was Alfonso Cuarón’s CHILDREN OF MEN (2006), which I had put off seeing because I misunderstood it’s content; oddly, I saw it the night Cuarón picked up the Oscar for GRAVITY, but if you ask me, he really won it for CHILDREN OF MEN. I saw and loved Olsen & Johnson’s HELLZAPOPPIN’ (1941), hard to acquire legally in the US due to rights problems, and 1932’s DIPLOMANIACS starring Wheeler & Woolsey. MESSIAH OF EVIL (1973), resurrected by Code Red, was a cool piece of forgotten 70’s horror. Oh, who are we kidding? The best thing I saw all year was RAW FORCE (1982), and you made me watch it!

I did! And I’d do it again. And that one would have to be on my list too. Damn, man, even though I’m the one who asked the question, I’m having a hell of a time answering it. Not because I can’t come up with any answers but because I can’t narrow them down to a reasonable number. This year I took a more active role in Daily Grindhouse, so I started looking into all the weirdo movies all the other movie websites don’t cover. (Nobody comes to us for BOYHOOD or HOBBIT coverage.) This was also the year I co-hosted the 2014 incarnation of the Daily Grindhouse podcast — which is currently in hibernation but I promise it will return — and so I got introduced to a bunch of movies I’d never even heard of before.

So first I would have to bring up STREET WARS, the first film we covered on the podcast in January. It’s a low-budget gang-war epic that doubles in intention as a clean-up-the-streets social tract. It stars nobody you’ve ever heard of before or since and it has the unusual quality, outside of “spaghetti” Westerns, of having almost all of its dialogue recorded in post. STREET WARS is otherworldly and bizarre and terrifically entertaining and touchingly optimistic. Basically, it’s I’M GONNA GIT YOU SUCKA played with the straightest possible face. Also, the soundtrack will drill itself inside your skull and set up residence.

The other movie I’d have no choice but to include is NEON MANIACS, which is basically a demented cross between a 1980s slasher movie and a pitch for a Saturday morning cartoon that never happened. What if your childhood action figure collection lived under a bridge and came out nightly to perpetrate murders? In my article on the movie I called it Toho monster movie meets slasher-horror meets high school” but I also brought up Troma and the Teenage Mutant Ninja Turtles. And none of that really covers it. It’s too much of a smooth blend of bizarre elements, too much its own thing to be easily comparable. Did you ever make yourself a monster drink? In my childhood that’s what we called it when we went to the soda fountain and mixed a little of every flavor into one cup. Then we drank it and started bouncing off the walls from all the sugar. That’s NEON MANIACS. 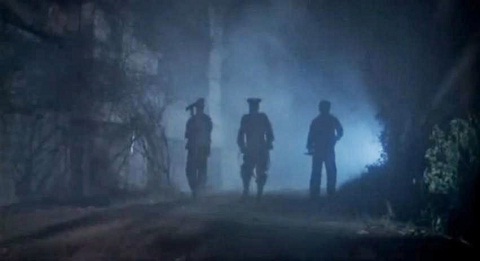 This one’s easy — Peter Bogdanovich’s 1968 film, TARGETS. I’m not particularly familiar with Peter Bogdanovich’s films; I’ve seen his interviews and had read some of his film criticism, but even now have yet to watch THE LAST PICTURE SHOW, which I swear is somewhere on my list for 2015. But TARGETS, man… I don’t know why this film doesn’t have more publicity attached to it. Wedged right between the 1967 release of BONNIE AND CLYDE and the 1969 release of THE WILD BUNCH, TARGETS was certainly part of the new wave in modern violence – as the Charles Whitman-esque shooting of the main character will attest – but it does so in the modern day, certainly differentiating itself from its WW2 and Spaghetti Western contemporaries. Furthermore, the self-reflexive whining of Boris Karloff and his legacy to the horror genre would be a worthwhile film in-and-of-itself, but combining the two and making them both shine? Damn impressive. I started the year by watching TARGETS for the first time, and I’m ending the year by writing a graduate paper on the film’s contemporary critical reception, so I’m pretty content to call 2014 “The Year of TARGETS” and kick all other titles to the side.

TARGETS was on my list, but it wasn’t a first-time view for me. I do love that movie, and kind of wish it had been Karloff’s last, his SHOOTIST, as it were. 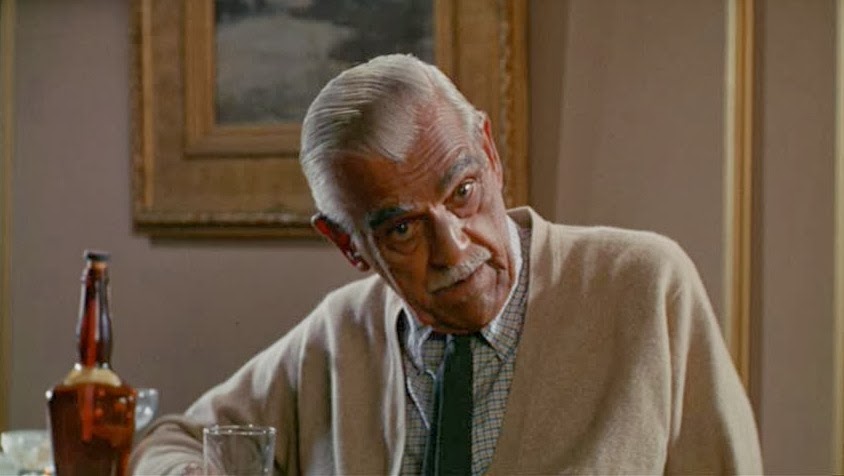 I like to think of it as a wonderful companion-piece to BLOOD THEATER, the similarly-meta Vincent Price recap of his career that has him murdering his way through a bunch of theater critics who don’t like his Shakespeare.

Three older movies I saw for the first time were SORCERER, ISLAND OF LOST SOULS, and THE BABY. All great. THE BABY blew my mind. I have to give that the nod.

I am embarrassed to admit that there were a few Andy Milligan films I hadn’t seen until this year, and since a first-time viewing of anything by Milligan is always a singular experience, I would say my “favorite” old flicks I saw this year were BLOOD and FLESHPOT ON 42nd STREET. Needless to say, I ended up watching both a few times to fully take in their dime-store depravity.

I *really* have to space out Milligan flicks, to like one a year. They are certainly unique in their own way, but I can only take so much of that unique at a time.

I was holding off because I kept giving it too much thought! I’ll go with 1967’s THE INCIDENT, Larry Peerce’s taught tale of a subway car taken hostage by a couple of street toughs (including Martin Sheen) – it’s a gritty, mean-spirited film in an isolated location in which nobody comes off entirely well, featuring a pretty amazing roster of talent including Ruby Dee, Jack Guilford, Beau Bridges, Brock Peters, Thelma Ritter and Donna Mills.

I loved finally getting to see SORCERER this year; Friedkin can do no wrong in my book and I loved how ahead of the time Tangerine Dream’s score was. I finally got to see HARDCORE with George C. Scott this year; Schrader could do no wrong from the late 1970s to the early 1980s.

THE BABY is a movie that both my friend Pat and I watched around the same time but we can’t remember who recommended it to who. Nobody wants to take the credit or the blame.

On the trashier side of things, one of the gems I caught on Amazon Prime this year was HORROR HOSPITAL from 1973. Alfred from the Tim Burton BATMAN movies decapitating people with his car. I also finally caught up with ZODIAC and am glad I did. THE STRANGE COLOUR OF YOUR BODY’S TEARS is a must-see. SHRIEK OF THE MUTILATED was bonkers, so glad I took a chance on it simply based on the box art.

I saw HORROR HOSPITAL on 16mm a few years ago, and loved it (despite Robin Askwith’s face). I loved how it had a weird James Bondian edge with a bunch of gadgets, and it took some really odd twists. Gough was, of course, amazing.

This feels like as good a place as any to close things out, and I’ll do it with links to all the podcasts Joe, Freeman, and I did in 2014. All are movies I personally saw for the first time in 2014.

And while I’m at it, let me remind our readers that while the DG Podcast remains on hiatus, Doug and Moe have been holding strong with the No-Budget Nightmares Podcast, which I can almost guarantee is full of movies that are new to EVERYBODY. Check it out! 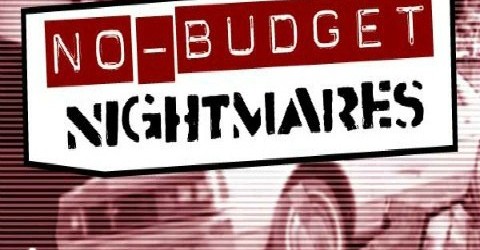