Home  ⁄  The Wire  ⁄  [THE BIG QUESTION] WHAT FILM TRENDS ARE YOU SICK OF SEEING? 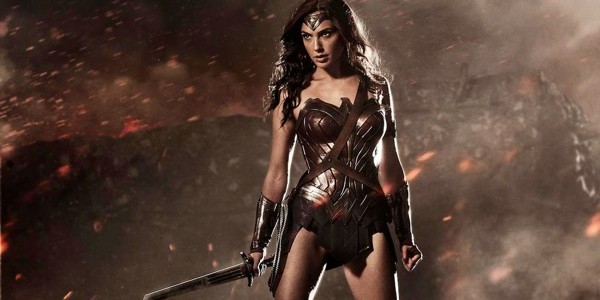 And we’re back, by popular demand. (Here’s last week’s super-team-up.) If you’re just joining us, this is what we’re up to: In an attempt to help you, our beloved readers, get to know us, your Daily Grindhouse staffers and contributors, a little better, we thought we’d pose and answer a big important movie-type question.  Please feel free to join us in the comments with your own answers and opinions. So here’s this week’s question:

What trends in film are you sick of seeing?

I just watched STARRY EYES and for the most part I was let down by it.

I loved the retro-styled poster, but the movie didn’t live up to it. There is a long tradition of box-art being better than the actual movie, but shouldn’t filmmakers be trying to make movies that are better than the box-art? Also, outside of Cronenberg, the “body horror” genre, which has been hot as of late, has never done much for me.

There seems to be a glut of satanic cults but the cults are nothing more than a McGuffin. In the case of STARRY EYES, I think the story of the cult would have been much more interesting than the one presented.

I won’t complain about an overuse of CGI, but I’ll certainly complain about a misuse of it. Creatures just look a heck of a lot more real when they’re interacting with actual human beings, and unless you have the budget and talent to do something correctly (something like DAWN OF THE PLANET OF THE APES certainly uses CGI to great effect) it looks forced and unconvincing. I know there are insanely talented effects technicians out there capable of doing amazing on-set work, and I’d like to see lower-budget filmmakers take the chance on them rather than going the “easy” CGI way out that honestly reads just as cheap as a half-baked monster effect did thirty years ago. 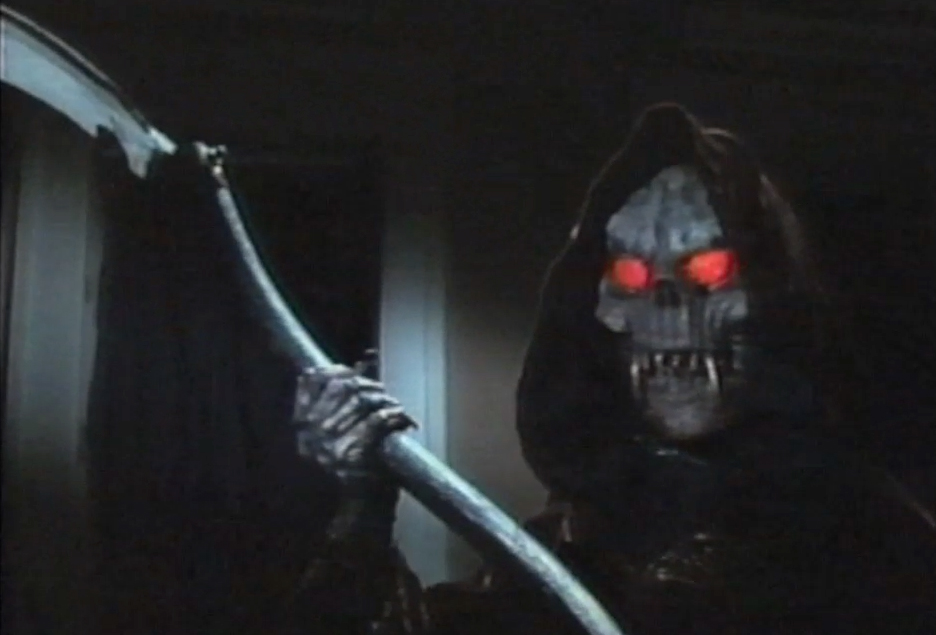 I watched SPOOKIES a few weeks back, and say what you will about the low-budget creatures, but they “felt” more real than most CGI monsters. DAWN OF THE PLANET OF THE APES had terrific use of CGI, right up there with JURASSIC PARK, but misuse of it seems to make everything look like a glob, like the monster in CLOVERFIELD did.

I’m not sure what I’m more sick of — CGI, or “throwback” practical effects. It was novel at first, sure, but by the time HATCHET III rolled around, the whole “old school” thing got to feeling pretty fucking stale, as well.

Intentional camp and quote-unquote “bad movies” get tiring — I prefer my horror-comedy in the vein of AN AMERICAN WEREWOLF IN LONDON and WAXWORK. 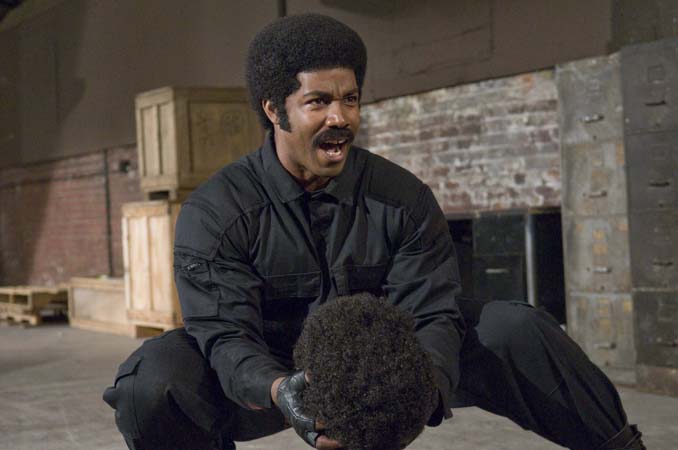 Intentional camp/forced retro is such a tricky thing to pull off, and it’s just miserable to watch when it fails. Doing it well takes not only a consistent tone but the ability to actually be funny outside of sheer mockery, like BLACK DYNAMITE or THE LOST SKELETON OF CADAVRA.

This may be pissing in the wind, but I’m completely sick of comic-book movies and tent-pole pictures. They’re McMovies. Surprised it took that long for that subject to come up. I’ve been feeling the comic-book-movie fatigue too. Maybe it’s because I’ve been into that kind of stuff for longer than the average human being, so while it’s new to the normals, it’s coming a bit late in life for me. Where were all these movies when I was in high school? It’s tough to get quite as excited now about a Joss-Whedon-directed AVENGERS movie or a Shane-Black-directed IRON MAN movie as I would absolutely have been then. While it’s personally validating, of course, to see that I was right all along about how great comic books are, I’ve kind of moved on to other interests by now. I still enjoy all the Marvel movies (except maybe the THOR movies), but there are some insidious side-effects of Marvel’s big-screen success.

The number-one most alarming response to the Marvel movies is coming from the Distinguished Competition. Seeing how Marvel has crushed the pop culture landscape with the smart universe-building plan that led from solo-hero adventure to solo-hero adventure to THE AVENGERS, Warner Brothers and DC Comics are going to attempt the same thing with a JUSTICE LEAGUE movie. The problem is that DC’s recent approach to superhero movies has been über-grave (see THE DARK KNIGHT RISES and MAN OF STEEL), which is totally inappropriate considering the fact that DC’s characters have always been innately campy, particularly compared to the more irreverent, iconoclastic Marvel characters.

Let alone the fact that THE DARK KNIGHT RISES and MAN OF STEEL are measurably inferior as actual films to IRON MAN and CAPTAIN AMERICA – DC is not building on as strong a foundation – I’m not even sure these people understand the tone of the subject matter they’re looking to capture. Imagine a deadly-serious AQUAMAN movie. Or just wait. It’s coming.

Even more troubling is what’s happening over at Universal. Plans are in motion to take Universal’s hallowed library of monster characters and turn them into an action-adventure team. Seriously. You like to give any creative venture, particularly an inevitable one you couldn’t stop if you wanted to, some degree of benefit of the doubt, but this one is sincerely pushing my good graces.

And I don’t even know if I can blame Universal, or DC, for these stabs at relevance. They’re just trying to make money. I blame the people who will pay to see these movies no matter what, just because. The most poisonous trend of all, really, is nostalgia. Movies are mounted based on name recognition, and people flock to see them for the same reason. People will go to see TRANSFORMERS movies because TRANSFORMERS movies exist. That needs to stop, although it probably won’t.

I saw the first TRANSFORMERS movie in theaters. It was loud garbage. By all accounts, the movies only got worse. So I didn’t go to see another one. Many other people did. That’s why they keep making them. If more people stopped seeing bad franchise movies after the first bad one, they wouldn’t keep making bad ones. General audiences have demonstrated they’ll pay for the big-ticket rides regardless of quality.

We’re lucky when they’re good. Almost all of the Marvel movies of the past eight years have been very good. That’s lucky for us; hard work for the people who made it happen. I’m thankful to the Marvel filmmakers for putting all that work in. But I worry very much about all the others who are looking to cash in on that hard work, and I worry about the audiences who will volunteer their cash regardless of whether they’re being handed junk or jewels in return.

Perhaps a bit ironic considering the site we all write for, but I’m entirely sick of Grindhouse throwbacks. It seems like every second low (low low) budget movie I watch is sullied with fake grain, film damage and intentionally poor performances. I’m actually a pretty staunch defender of the Tarantino/Rodriguez GRINDHOUSE experiment, and some of its children — FATHER’S DAY, HOBO WITH A SHOTGUN — have been a lot of fun, but too many filmmakers have mistaken an aesthetic for actual content. Nobody is going to mistake a no-budget shot-on-DV amateur work for a legit ’70s exploitation movie, and watching someone with half the talent and a quarter of a quarter of the resources try and ape an era that ended before they were born has started to get embarrassing.

Doug makes a very good point there. I think it goes back a little further to back when EVERYBODY was making faux-Tarantino flicks. My grouse goes back even further, though. Like the Grindhouse phenomenon, it’s become epidemic: Film guys, every
movie does not require a MASSIVE APOCALYPTIC CLIMAX. I call this the RAIDERS OF THE LOST ARK syndrome, not because of its literal deus ex machina ending, but because that’s when producers started insisting for the same thing in my scripts. Sometimes the story really does need only a wry Twilight Zone denouement, you know? How many times do we have to re-create 9/11?

Some times all you need to hear is “Zed’s dead, baby.”

One thing I didn’t see mentioned — I’m also really tired of demonic possession films. It’s a really tired template (New house! Haunted? Nah… OH SHIT! ACTUALLY HAUNTED!) and even the productions with some money and talent fall into a lot of the same narrative traps. At this point, I think we’ve demonically possessed B-list actresses about every which way we possibly can, and I’m ready to put that trend to bed. There seems to be a lack of effort in creating real, interesting monsters on the screen — while I did have some problems with THE BABADOOK, I thought that the creature itself was a wonderful creation and a breath of fresh air in an otherwise tired genre. We’ve done killers, we’ve done demons; I think it’s time to go back to the mill and create some good, old-fashioned nightmare creatures. And if THE BABADOOK inspires people to try something new with their creature design, then more power to Jennifer Kent and company.

1. Movies continually trying to make stars out of actors who are boring and are never going to be stars (Sam Worthington, Sam Claflin, Jai Courtney).

2. Movies that try to make villains sympathetic, thereby robbing them of the very thing that makes them interesting (i.e. MALEFICENT).

4. Sequels to movies that had perfectly self-contained stories the first time around (THE HANGOVER, HORRIBLE BOSSES).

I’d love to end this conversation on a positive note by suggesting that no trend is too tired if it’s approached with enough ingenuity and wit. You can’t count anything or anyone out. There’s always hope. There has to be. That’s why we all keep going back to the movies, because as many times as we’ve been burned by bad ones we’ve also encountered the thrill of discovery. And that’s a feeling worth pursuing, for audience and creators alike.

That said, I could go the rest of my life without seeing any more movies “for adults” based on fairy tales. Goddamnit but that junk’s obnoxious as all hell.

Punch it. Punch the stupid wolf face. You know you want to.