Home  ⁄  The Wire  ⁄  THE FIVE TONYAS: A PRE-‘I, TONYA’ HISTORY OF THE TONYA HARDING/ NANCY KERRIGAN SCANDAL IN POP CULTURE 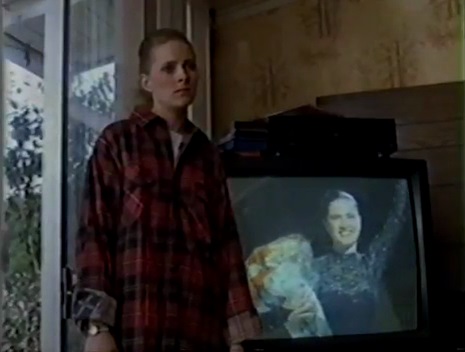 Craig Gillespie’s I, TONYA is opening wide this coming weekend, and the cinematic telling of the story of figure skater Tonya Harding has garnered quite a few accolades, with Margot Robbie and Allison Janney both getting cited as Oscar contenders.  If the word-of-mouth and the trailers are anything to go by, it’s a hell of a movie, and there’s no doubt that it’s based on fascinating source material.  The story of Harding and the rivalry with skater Nancy Kerrigan that climaxed in an attack on her right knee is one of the great scandals of the ‘90s, a story with elements of class, media hype, sportsmanship and colorful characters that make it a natural for a compelling narrative.  It’s a story that the writers of FARGO could have come up with, and it’s easy to see how it became the story of 1994 – it had all of the elements of a sordid scandal yet was ultimately inconsequential to anyone outside of the parties immediately concerned. 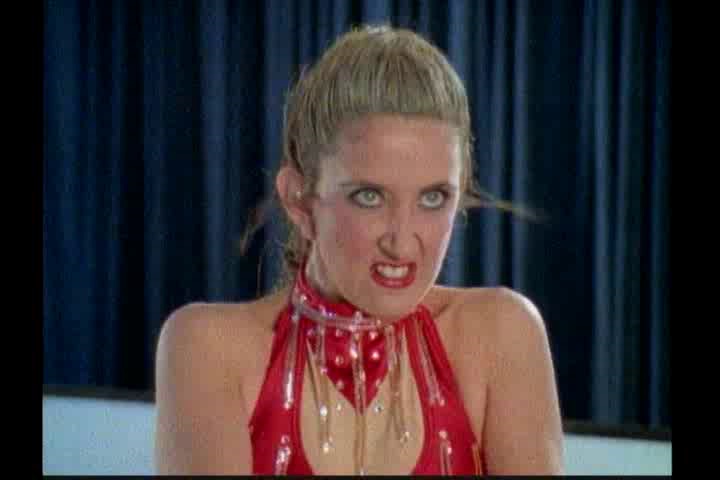 It’s no surprise, then, that I, TONYA is far from the first time the tale has been fictionalized, especially in an era in which the scandal-driven made-for-television movie was at its height.  Previous years had produced no less than three different movies based on the Amy Fisher story, as well as two based on cheerleader-murdering mom Wanda Holloway and another two about Diana, Princess of Wales, so it was only natural that the story would find its way toward being retold on the small screen. 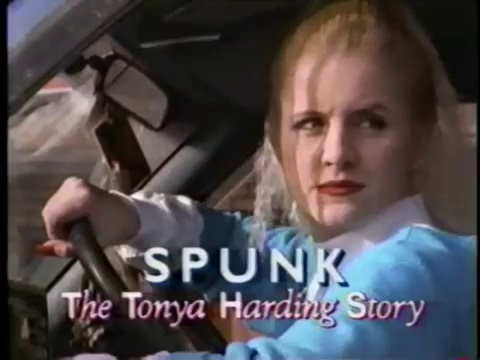 The first small screen depiction of Tonya and Nancy’s rivalry aired during the 1994 Winter Olympics, before the pair had even competed.  Clocking in at just over five minutes, SPUNK: THE TONYA HARDING STORY was produced by Comedy Central and starred Family Ties’ Tina Yothers as Harding.  Produced before Harding was definitively implicated in the attack on Kerrigan, the film presents Harding as a potential victim of the machinations of her ex-husband Jeff Gillooly (this was clearly created after Harding had separated from Gillooly on January 18, but was ready to air by February 25 when Kerrigan won the Silver medal) and, potentially, even mentioning the possibility of Nancy Kerrigan sabotaging herself in order to secure more affection from the public. 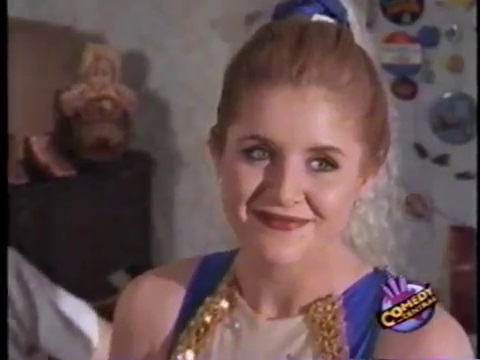 It’s a fascinating mini-portrait of the scandal before all of the facts came out, and even includes a Charlie Sheen joke that somehow works even better now. 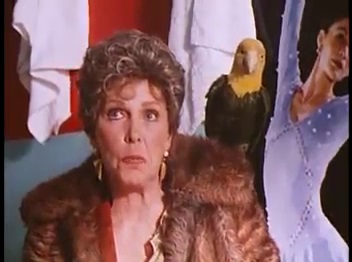 Best of all is the first performance by an uncredited actress as Tonya Harding’s mother, Sandy Golden. And you can watch it right here!

Meanwhile, the major networks scrambled to get in on the action to be the first one out of the gate to depict the events that kept the nation enthralled. The winner was NBC, who were pulling double duty by signing Nancy Kerrigan on to host Saturday Night Live for the March 12 episode, just a little over two weeks after Kerrigan’s medal ceremony. To add to the question of Harding’s involvement (the episode aired four days before Harding pled guilty to conspiracy), Kerrigan herself had been under public image scrutiny that same week when she made rude comments to Mickey Mouse about appearing in a Disney World parade. (It was a crazy time.) 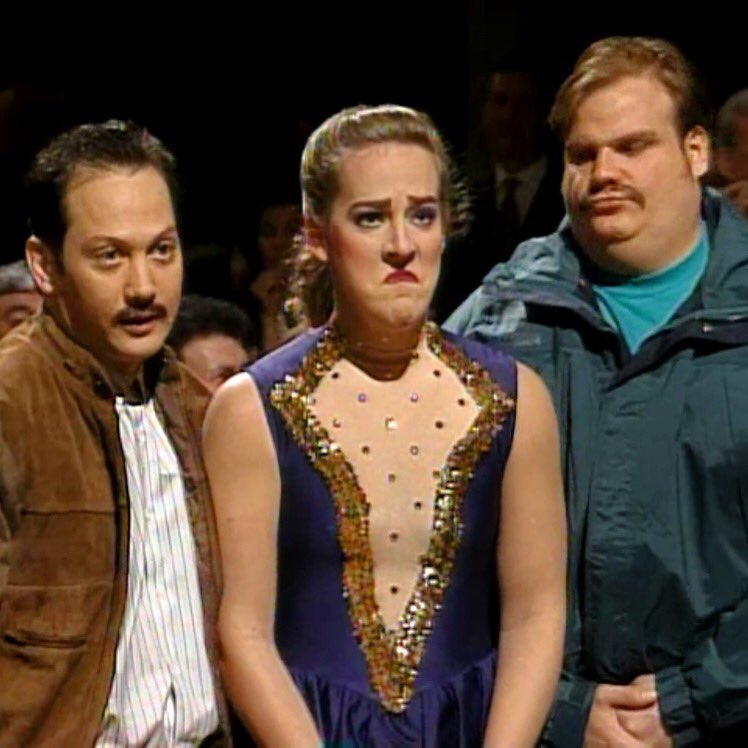 While Kerrigan made for an awkward host (as an actress, she’s a fine figure skater), the pairing at least led to a monologue that could play on the events of the previous weeks, with Melanie Hutsell as Harding, a would-be host intent on filling in should Kerrigan not be able to complete her duties.  (David Spade appears as Oksana Baiul with Rob Schneider as Gillooly and Chris Farley as Harding’s “bodyguard”/FBI sellout Shawn Eckhardt.  It also marked the first episode that Michael McKean served in the cast.)

Kerrigan’s lackluster performance didn’t deter the network from staying on the skating scandal train, and their big production was yet to come.  The network was busily working on TONYA AND NANCY: THE INSIDE STORY, a feature film based on the story that would air just six week later, on Saturday, April 30. Written by Phil Pennington (who’d penned similar quick-turnaround hot-button teleficks AMY FISHER: MY STORY and IN THE LINE OF DUTY: AMBUSH IN WACO and directed by Larry Shaw (NURSES ON THE LINE: THE CRASH OF FLIGHT 7), the film had to be put together before many of the details of the events were fully known, and aired while audiences were still attuned to the story that was losing steam the further away it got from the Olympic games. 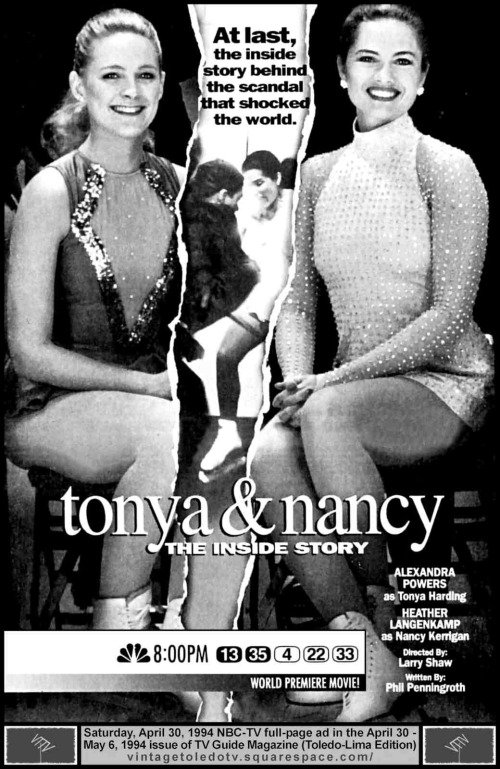 The result is a strangely compelling mess that meshes multiple points of view of the same events, re-enacted interviews, and even depictions of the process of getting the rights to a TV-movie based on the events (thereby potentially being one of the few made-for-TV movies that actually shows its own creation). Alexandra Powers plays Harding, while NIGHTMARE ON ELM STREET’s Heather Langenkamp trades one Nancy role for another as Kerrigan. James Wilder makes for a suitably sleazy Gillooly, while Head of the Class’s Dan Schneider (shortly before he became a prominent Nickelodeon producer) plays Eckhardt. The film features narration by an unnamed screenwriter played by Dennis Boutsikaris, talking to the audience through his process of… creating the movie that they’re watching. 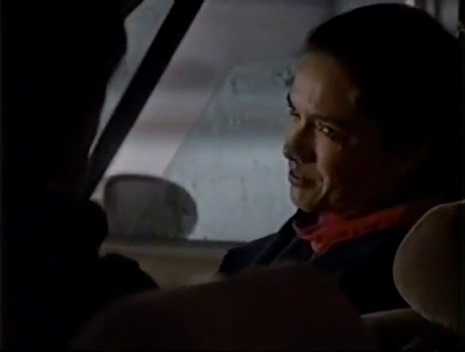 TONYA AND NANCY also integrates actual footage of Harding and Kerrigan relatively seamlessly, though it helps that the leads so closely resemble the people that they’re depicting. Thanks to the oddly meta nature, the film only occasionally falls into the same trappings of many made-for-television films of the era, depicting events with a mild sense of satire – as a result, however, the tone shifts dramatically when showing scenes depicting Gillooly’s abuse of Harding. It doesn’t always work, but it’s certainly a bold experiment for a network (not too far from HBO’s THE POSITIVELY TRUE ADVENTURES OF THE ALLEGED TEXAS CHEERLEADER-MURDERING MOM, which brought a sense of style to the quickie scandal telefilm the previous year), and one made with an eye not just on depicting the events, but on showing how the media was implicit in how they were presented to the world. 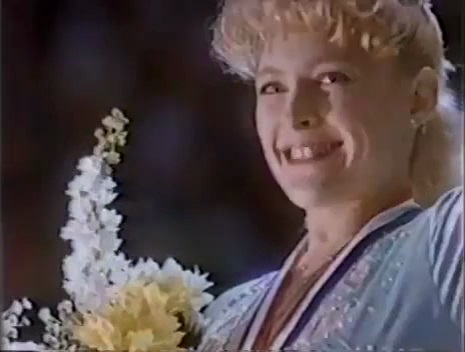 Oh, heck, you can watch that here!

While the film didn’t perform up to expectations (it ranked 41st for the week and was beaten during its initial airing by Dr. Quinn, Medicine Woman) and kept the other networks from greenlighting their own takes on the story, television wasn’t done with Tonya Harding and Nancy Kerrigan just yet.  Showtime, along with the newly re-established National Lampoon, got comedienne Julie Brown to co-write, co-direct and star in ATTACK OF THE 5’2” WOMEN, a “double-bill” feature film in which Brown depicted Harding and Lorena Bobbitt, the woman who made headlines after cutting off her husband’s penis.  (It wouldn’t be the last time the pair’s stories would be intertwined.)  ATTACK aired on August 21, the first of several made-for-Showtime films that National Lampoon would lend its name to over the coming years. 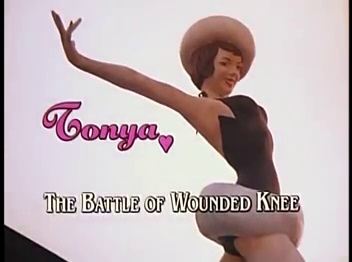 The Harding segment, entitled “Tonya: The Battle of Wounded Knee,” has the benefit of having more information that had come forth since TONYA AND NANCY, though much of that is as heresay as anything depicted in the earlier film. (Harding firing a gun at Gillooly, for example, is depicted in ATTACK, though the event that may or may not have happened – this question is addressed directly in I, TONYA.) Being satire (the Harding character is called “Tonya Hardly” with Kerrigan, as played by Head of the Class regular Khrystyne Haje, called “Nancy Cardigan”), ATTACK isn’t reliant on facts, but it does find humor in many aspects of the events that would be meaningless to those not paying attention to the media frenzy of 1994.  (Viewers may be puzzled by Margaret Cho’s cameo as “Connie Tong” if they’re unaware that Chung had been assigned to cover Harding’s story, memorably walking out on an interview with her during the Olympics.)

Playing the story as full parody (and cutting it down to 45 minutes, with Bobbitt’s story taking the film’s second half) makes for an energetically fun flick, though much of your enjoyment will depend on your appreciation for Brown. Harding is depicted as being the ringleader behind the assault, with Gillooly (John Hoffman, later the producer of Looking and Grace and Frankie) and cohort Sean (CANDYMAN’s Eric Edwards) played is incompetent goofballs. Peter DeLuise appears as the performer of the hit, Sydney Lassick plays a would-be hitman and Broadway performer Susan Watson is memorable in a brief role as Harding’s mother.  (To be fair, every depiction of Harding’s mother is great.) There’s a pretty great parody of Nancy Kerrigan’s chicken soup commercial and a surprisingly large number of gags about the size of Harding’s butt. Despite the implication of Harding’s guilt, by presenting the events from her point of view, it’s a surprisingly sympathetic depiction (in a twisted way) of her life, addressing the class and style implications in her personal history as motivation via a musical number.

Oh, you can watch it all here!

Meanwhile, Brown’s fellow musical comedian “Weird Al” Yankovic was working on his own take on the events. A parody of the Crash Test Dummies’ “Mmm Mmm Mmm Mmm” (possibly the most oddly-named song ever to become a hit), Yankovic’s “Headline News” referenced how scandals were shown by media outlets (even referencing made-for-television movie rights) citing the Harding/Kerrigan duel, Bobbitt’s de-penising and the Singapore caning of American vandal Michael Fay. Yankovic himself directed the music video.

It’s a fun song, though audiences may have been burned out on the scandals by the time of its release on September 26. The sole new song on a boxed set (also released on a greatest hits album a month later), the song peaked at number 104 on the Billboard charts, with reviewers mentioning that the song was already dated – a testament to how quickly the news cycle had begun to move. (On the plus side, the nature of the song made it easy to adjust, which Yankovic does occasionally in concert.) 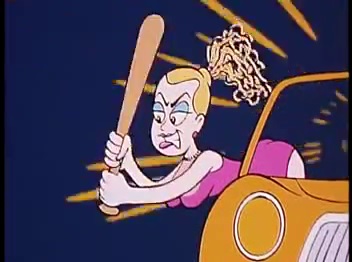 “Headline News” wasn’t the only place that you could find Tonya Harding that week. Harding had finally appeared on screen as herself – albeit in footage shot the previous year. TONYA & JEFF’S WEDDING NIGHT, a recording of Harding and Gillooly having sex (though the events happened around Halloween), had been sold by Gillooly to Penthouse after copies of the tape had leaked, and was now available to consumers and video stores at the bargain price of $29.95 a pop. But again, Harding wasn’t alone in her movement from the headlines to the back rooms of video stores – John Wayne Bobbitt, the object of fellow 5’2” WOMAN Lorena’s whacking, was using his 15 minutes of fame to star in JOHN WAYNE BOBBITT UNCUT. (Bobbitt would later star in FRANKENPENIS as well.) 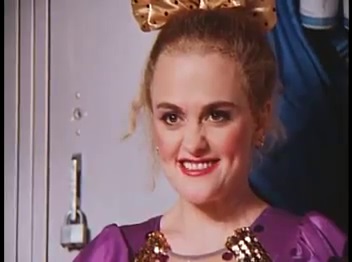 While I, TONYA will no doubt be a film that does a fine job at exploring the question of why Tonya Harding’s story is one worth telling, it’s difficult for those who weren’t around in 1994 to understand what a huge story the tale of Harding and Kerrigan’s rivalry was to millions of Americans. The reaction to the story was even larger than the story itself, as all of the fictionalized recreations of the events (including, it appears, I, TONYA) show not only the characters and events involved, but show what a tipping point it was in terms of how the media depicts these events. You can’t talk about Tonya Harding and Nancy Kerrigan without talking about how they were talked about, and these varied interpretations of their story give some insight as to why. 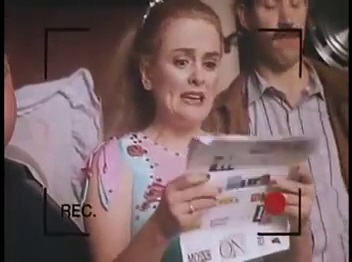 As a special bonus, here’s Julie Brown (and others) talking about the appeal of made-for-television biopics: