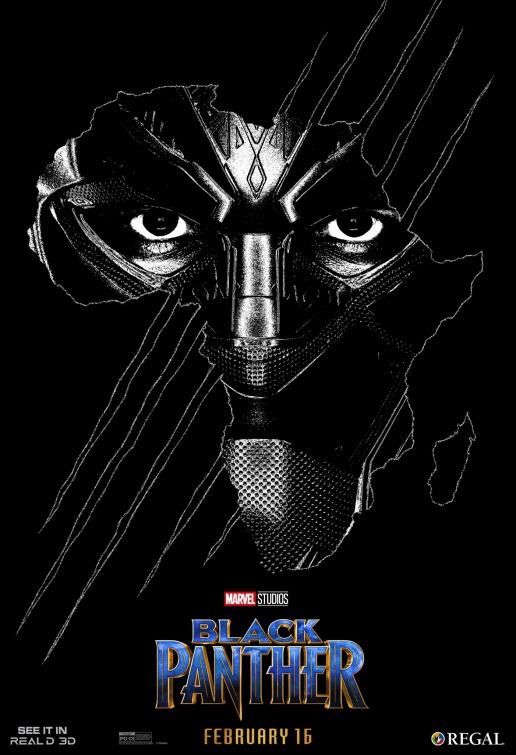 Like many superhero movies, BLACK PANTHER starts with an animated origin story. While this is not unexpected, it is also not unwarranted. The Marvel character of Black Panther may be well known to readers, but to film-only fans, the character has only appeared in CAPTAIN AMERICA: CIVIL WAR. Given this thin cinematic presence, BLACK PANTHER providing a quick dive into his story’s origin lays a welcome background early in the film.

The African nation of Wakanda appears to be isolated, largely undeveloped, and a humble place. But we learn though this ‘origins’ animation that the initial appearance of the nation to outsiders is not entirely accurate. Many centuries ago, a giant meteorite made of the imaginary metal vibranium struck the earth where Wakanda stands. This metal is the most magical metal in the universe. It can be used to build more technologically advanced gadgets and weapons than we regular folk can imagine. Its radiation also grows plants which will pass on superhuman abilities to whoever consumes them. And nearly all of Wakanda sits atop a mountain of this marvelous metal. This puts Wakanda’s technology so far ahead of the rest of earth’s civilizations that Wakanda is able to cloak itself and remain at perfect peace in near isolation.

Clearly, in order to get some sort of plot going in this utopia, we need to have something threaten this idyllic world. When the king T’Chaka (John Kani) dies while visiting the UN headquarters, his son T’Challa (Chadwick Boseman) must take over as king of this secret and advanced country, and as the new Black Panther. But even with the potential to spend plenty of screen time exploring the growing pains of taking over ruling a nation, T’Challa has to hit the governing ground running to try to catch a bad guy. Klaue (Andy Serkis) stole a modest amount of vibranium from Wakanda and is using it for profit and to make extreme weapons. Not wanting their secret to get out, or wanting these futuristic weapons to kill folks, T’Challa takes his on-again/off-again girlfriend Nakia (Lupita Nyong’o) and his best general Okoye (Danai Gurira) to Busan to try to catch this jerk. When they run into CIA agent Ross (Martin Freeman), it is clear that this operation is more complicated than they think.

Here lies my one teeny problem in this vast, absolutely wonderful film: the plot with Klaue is totally unnecessary. Yes, it does get Ross to join the gang, and it introduces us to the real bad guy, Killmonger (Michael B. Jordan), while also letting us see an amazing South Korean speakeasy casino brawl, but ultimately it could can easily been trimmed from the film and made it feel a lot tighter. This is not to say that BLACK PANTHER drags in any way. In fact, the pacing of the film is perfectly swift without feeling rushed, but it is also hard to argue that any film should be longer than two hours.

Beyond that quibble, we have here one of the best Marvel films to date. The visuals are astounding and create worlds of which we could never dream. The characters are complex, with rich motivations and authentic personalities. But above all of this, we also have a film that embraces its comic book origins and does not shy away from being political.

The best parts of any superhero story are the battles and the gadgets. Without some amazing fight set pieces, we are left with a weepy character drama, or an empty shell of a loosely comedic action film. Right from the beginning, BLACK PANTHER establishes that not only will the Panther himself be kicking lots of ass, but he will be doing so with some fine, inspired gadgets. The suit itself can store kinetic energy. There are cars that can be raced through the busy streets of Korea from a virtual deck in Wakanda. And when it comes to the grand finale, we are carefully reminded that this African nation will utilize all of its resources, including decked-out animals, when in battle.

Most, if not all, of the gadgets and gizmos featured in BLACK PANTHER have been invented by T’Challa’s younger sister, Princess Shuri (Letitia Wright). More excitable than Lucius Fox, but just as creative as Q, Shuri outfits her brother in the best possible armor and gives the gift of continued technology to all of Wakanda. Seeing a young black woman on the big screen as a scientist, and a spectacular one at that, recontextualizes what it means to be an inventor in a blockbuster film, which is another strength of BLACK PANTHER.

Never at any time does the film deal with race in a pandering or forced way. But just like being an actual racial minority in America, BLACK PANTHER is also never afforded the luxury of not having a single moment of existence not be about race. The overarching theme of the eventual conflict in the film is globalization, but this manifests itself in Wakanda dealing with helping black people all over the world who have been treated poorly merely because they look as if they were from Wakanda. With this context hanging over the film, we are able to look at Wakanda as a world wherein there is no racial prejudice. Every person has a job, and the whole country is well-fed. The herdsmen get a place in the senate, along with the scientists and the farmers. Nearly every woman we see is either a warrior or a scientist. Wouldn’t that be an amazing world to live in? But none of these aspects of Wakanda are called attention to. We are shown, rather than told, that people all have value.

If politics are not your thing, BLANK PANTHER is still a vastly entertaining superhero movie with a new hero who is easy to root for. If you are invested in art as a political force, then you will be able to stand up cheering at BLACK PANTHER too.