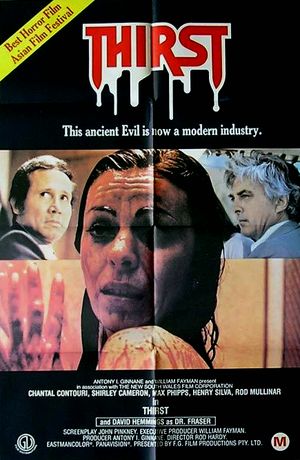 If I hadn’t already had an impressive repertoire of strange and exotic foods under my belt, I may have taken a different view on this film. But seeing as how I’ve consumed everything from sea urchin to bone marrow, fish eyes to crickets, coming from the point of view of a foodie, this film makes a certain amount of sense to me. So it was while watching Rod Hardy’s THIRST that I had the epiphany that what I was watching wasn’t a 70’s Aussie psychological horror thriller, but rather a futuristic culinary wet dream. 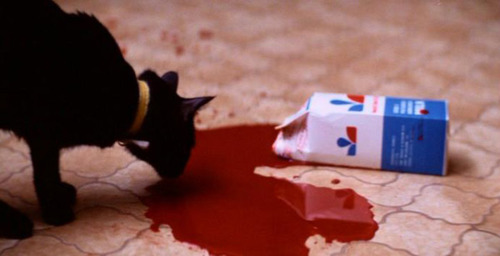 The film stars Chantal Contouri as Kate Davis, a successful professional and happily married woman, unaware that a group of cultists had decided that she was the heir apparent and last scion to the title of Bathory. They decide to approach her in a forward thinking manner (ie: kidnap and forcible confinement) in order to convey their argument about her genetic lineage. I should stop here and point out, from a biological term, that after the fourth generation there is no DNA left from your great grandparents due to the pairings of your grandparents and parents combination to produce you, so that theory is booted up the arse. They want to show her, however, that their Brotherhood is neoteric in their approach to farming. Whereas in the olden days where you would rip out your victim’s throats, they now have a sanitary ‘milking farm’ where humans are brainwashed and hypnotized so they can be clinically drained of fluids for consumption.

If somebody approached me and showed me all this, I’d be inclined to think they or I had gone off of the deep end and Kate is no exception. Given she has to deal with these people who try to brainwash her, douse her blood, kidnap her husband and drain him, it’s feasible she goes a little bit bonkers. The un-hero, Dr.Fraser, lulls us all into believing he’s the good guy (doesn’t want Kate influenced, helps her to save her man Derek) only to find that he’s convinced he’s from a vampiric background as well, and his sole motive in helping her is in order to have her join him in… whatever sort of adult relations vampires have. Not gonna lie, I’m pretty sure I’ve dated that guy (“I’ll help you do all this stuff – hey since I’m such a nice, great guy, wanna sleep together?” Sorry guys, dirty pool) and it got my back up just a tiny bit.

It’s not really such a far-fetched idea. Maybe in ’79, but there’s foodies in NYC who are nursing mothers. They take their breast milk and make haute couture cheeses out of it, going as far to eat certain foods in order to influence flavour. It’s not totally hard to buy that if there becomes enough demand for human breast milk cheese that there may be a human milking farm at some point. Only they’d likely be brainwashed with Oprah and 50 Shades Of Suck. I’m just not sure how Elizabeth Bathory comes into the picture. Yet.