NOTHING BUT TROUBLE has a reputation for being a bad comedy. That notion is missing the point. It’s true that the 1991 film was a box office flop, earning just over $8 million. (The generally-forgotten John Goodman comedy KING RALPH, which opened the same weekend, made that amount in its first three days.) Reviews from critics were scathing. It has a paltry 5% approval rating at Rotten Tomatoes, with just one “fresh” review that comes from yours truly. What people fail to realize is that NOTHING BUT TROUBLE may or may not be a bad comedy, depending upon your point of view, but it’s definitely a good horror movie. 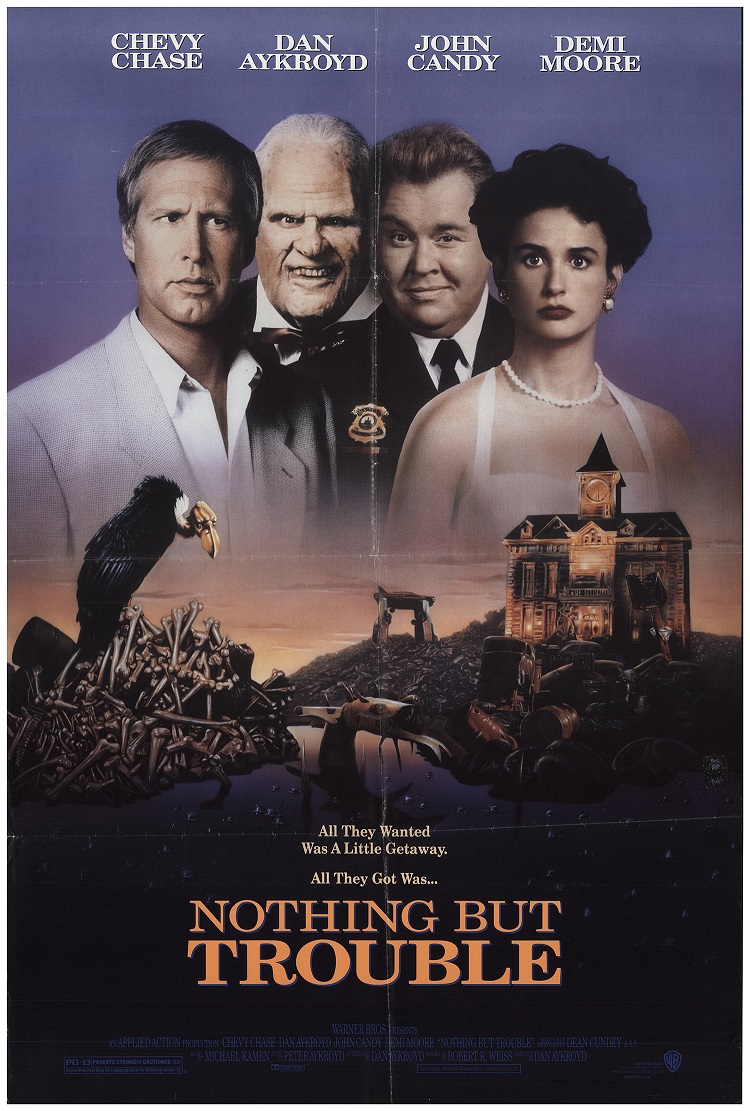 If you’ve never see it or don’t remember it, here’s the plot in a nutshell. Financial publisher Chris Thorne (Chevy Chase) agrees to drive sultry lawyer neighbor Diane Lightson (Demi Moore) from Manhattan to Atlantic City. Accompanying them are two of Thorne’s clients, Brazilian siblings Fausto and Renalda Squiriniszu (Taylor Negron and Bertila Damas). As they’re driving through the ghost town of Valkenvania, Pennsylvania, Thorne is pulled over by cop Dennis Valkenheiser (John Candy) after making a rolling stop at an intersection. 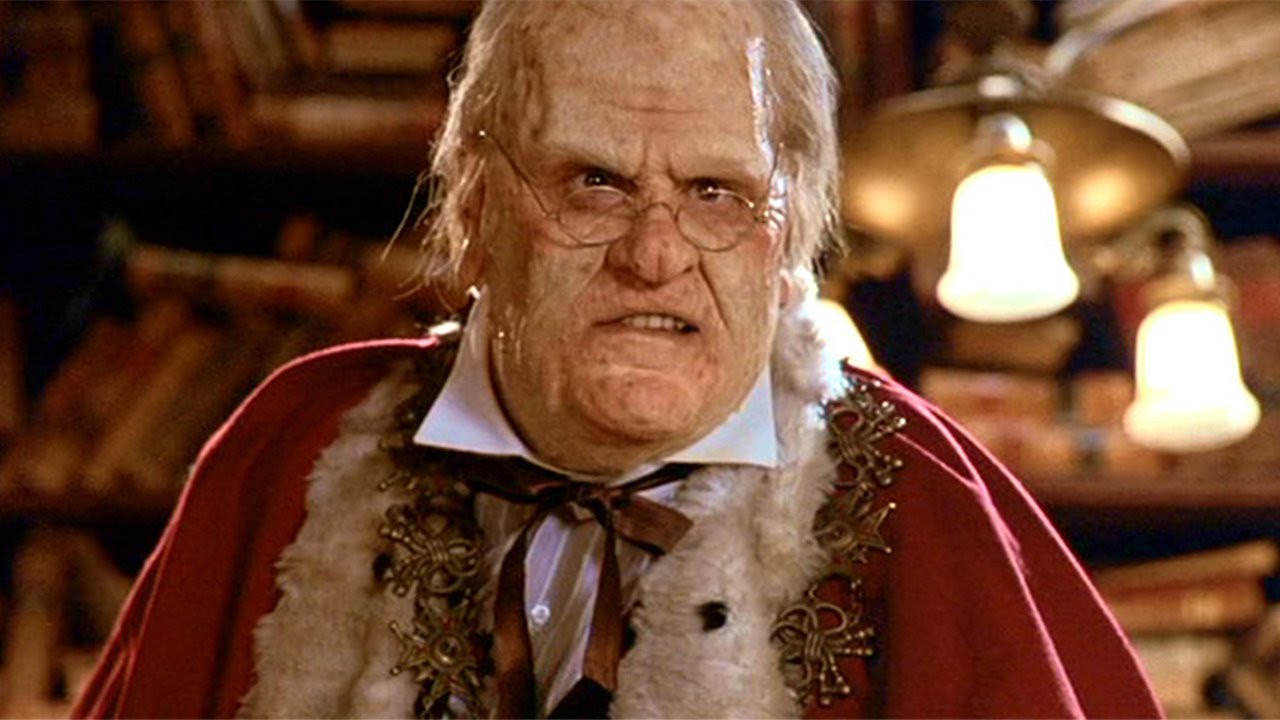 Dennis takes the gang to the home of his grandfather, Judge Alvin Valkenheiser (Dan Aykroyd, who also wrote and directed). For the crime of not coming to a complete stop, the judge sentences Thorne to death. The only way to escape this fate is for him to marry Valkenheiser’s granddaughter Eldona (also played by Candy). 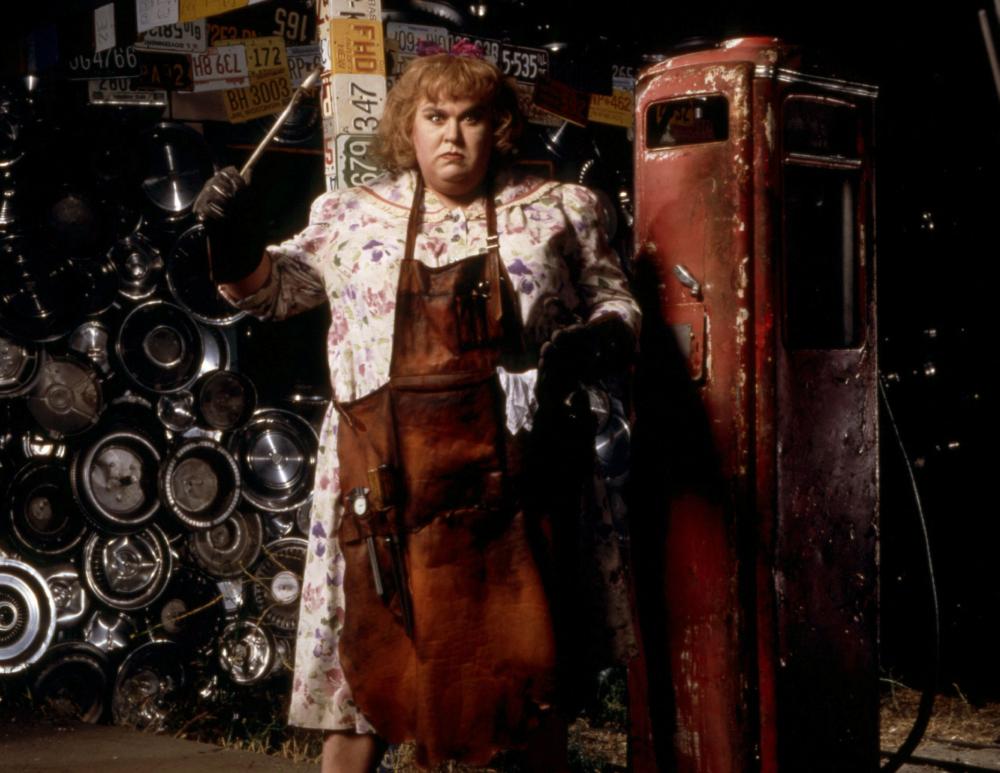 Aykroyd is said to have been inspired to make a horror-comedy after going to see Clive Barker’s HELLRAISER and observing the audience’s reaction. Whether you find the film’s humor funny or not, the commitment to horror is impressive. Consider Valkenvania, a mostly-abandoned town inspired by Centralia, PA, where an underground mine fire has been burning since 1962. The film portrays its fictional locale as a desolate place with smoke billowing up from under the road. Horror movies have long used remote and/or isolated locations as their settings – cabins in the middle of the woods, stretches of road running through the desert, and so on. Aykroyd certainly recognized the value of stranding his characters someplace where help would not be readily available. 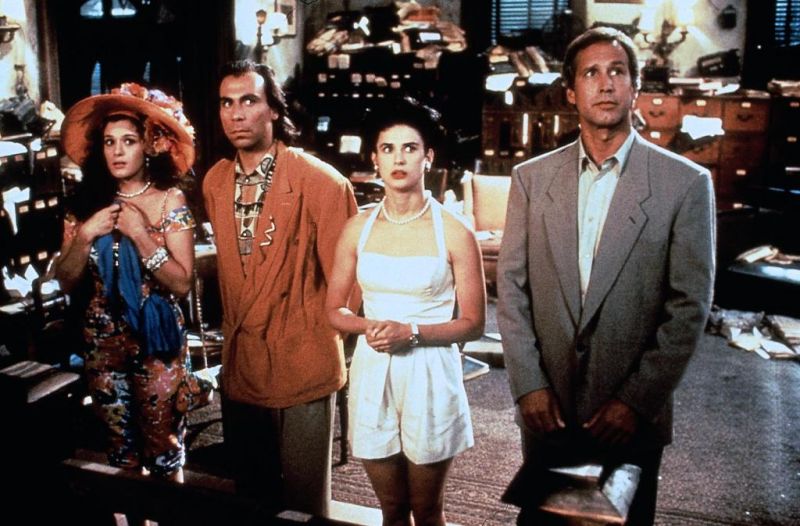 Judge Valkenheiser lives in an old mansion filled with traps. As Chris and Diane attempt to escape, they encounter a chute that drops them into a pit of squeaky dog toys, as well as a moving wall that threatens to crush them. Worst of all is “Mr. Bonestripper,” a device out back. It’s essentially a rollercoaster that ends by ejecting passengers onto a conveyer belt. They then roll through some fire, have metal teeth strip off their skin, and get their bare bones shot out a pipe in the back. A terrible way to die, for sure. Early in the picture, we see a group of drunken revelers go through it. Chris ends up on it at one point, but gets away when Mr. Bonestripper breaks down. 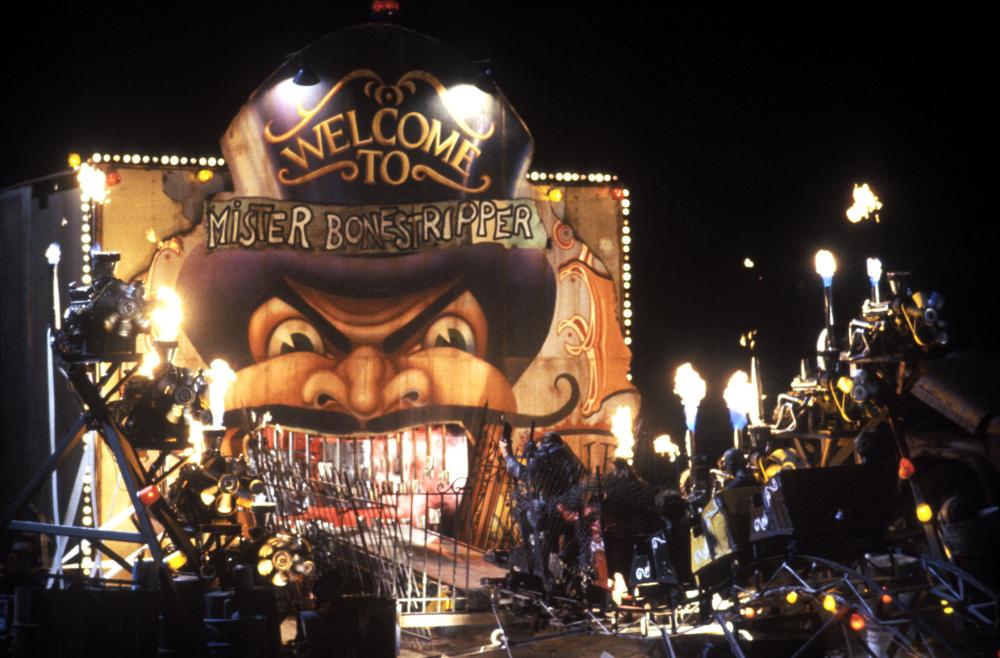 Keep in mind that NOTHING BUT TROUBLE came out in 1991, a full thirteen years before SAW and its villain would turn elaborate death traps into a full-fledged horror movie phenomenon. Aykroyd was ahead of his time in envisioning such things. He also made Judge Valkenheiser a sadist who, like Jigsaw, clearly enjoys watching those he deems guilty suffer tortuous fates. Sure, his nose, which looks like a penis, may be less intimidating than Jason Voorhees’ hockey mask or Leatherface’s chainsaw, but he’s obviously a murderous psychopath cut from the same cloth. 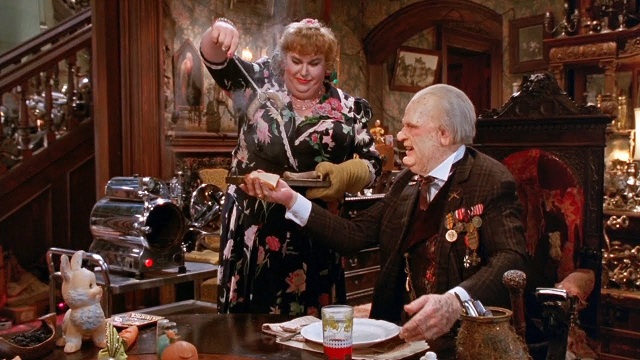 Another classic horror staple is found a little later on in the movie. Diane manages to make her way out of the mansion, only to be detained in the scrapyard by Bobo (Aykroyd) and L’il Debbul (John Daveikis), obese deformed twins covered in filth and wearing nothing but oversized diapers. They take a shine to her, yet nevertheless strap her down underneath a guillotine-like device. We know that if they choose to drop that thing on her, Diane will be chopped to pieces. 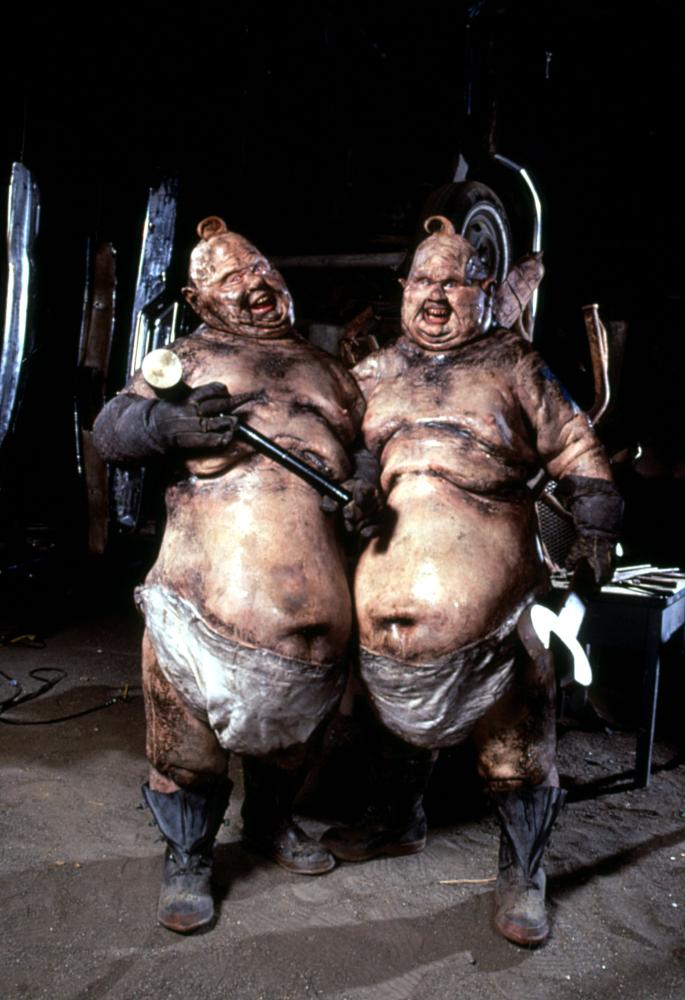 Bobo and L’il Debbul are depicted as being man-babies, although they fit into a long line of horror antagonists. From the cannibal savages of THE HILLS HAVE EYES to the rednecks of CABIN FEVER and beyond, horror has long used deformed characters to generate chills. To avoid the perception of mocking those with disabilities, movies frequently take these villains to the extreme, making them look unrealistically inhuman. NOTHING BUT TROUBLE‘s twisted twins are no different. They are also undeniably stupid. That is part of what makes them so dangerous. The siblings are too dumb to question orders, and their tiny brains are incapable of thinking for themselves. Fortunately, Chris rescues Diane just as they drop the blades. 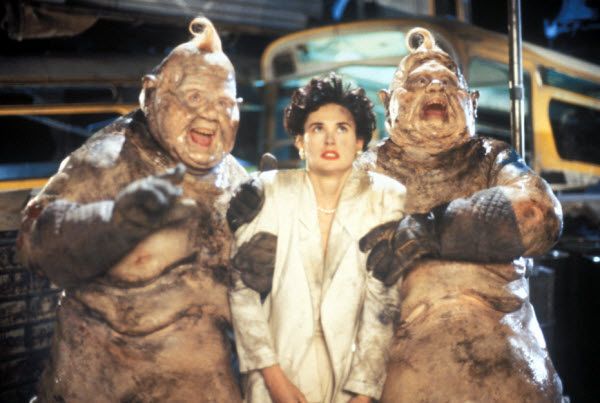 That brings us to the ending, where Chris and Diane escape as an underground coal fire causes the mansion to collapse. Once back home, Chris believes he is safe. In fact, quite the opposite is true. He turns on the TV news and sees coverage of the mansion wreckage. The reporter walks over to interview a witness to the destruction, who turns out to be Judge Valkenheiser. Despite appearances, he was not crushed in the collapse. The judge looks right at the camera, flashes Chris’s driver’s license (which he earlier confiscated), and announces that he’s coming to New York. 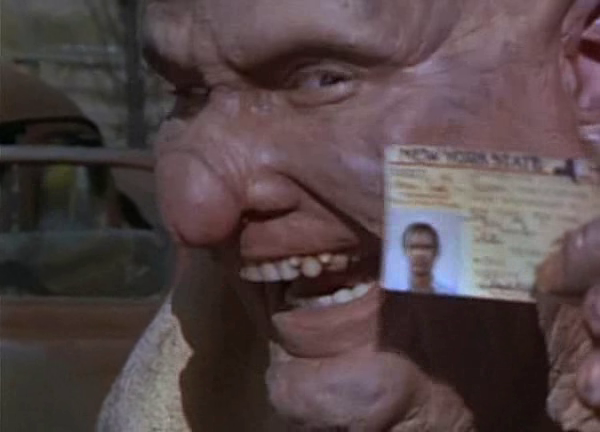 Horror movies are known for the “killer isn’t really dead” ending. No matter what befalls Jason, he always comes back for another FRIDAY THE 13TH sequel. Freddy Krueger and Chucky the doll similarly manage to escape the repeated appearance of death. Judge Valkenheiser should, by all accounts, have met his demise when the coal fire took his home. In traditional horror-movie villain fashion, though, he lives on, ready to terrorize Chris another day.

Where NOTHING BUT TROUBLE trips viewers up is in its addition of comedy. People tend to think of it as a comedy with horror elements, rather than a horror movie with comedic elements. When you make that flip-flop, it becomes easier to see the picture’s merits. Aykroyd made a movie that is intended to disturb the viewer. The comedy is there to temper the demented ideas contained within the story. Casting comedians like Chevy Chase, John Candy, and himself, meanwhile, is an act of pure subversion, because who in their right minds would expect to see any of them in a fright flick? 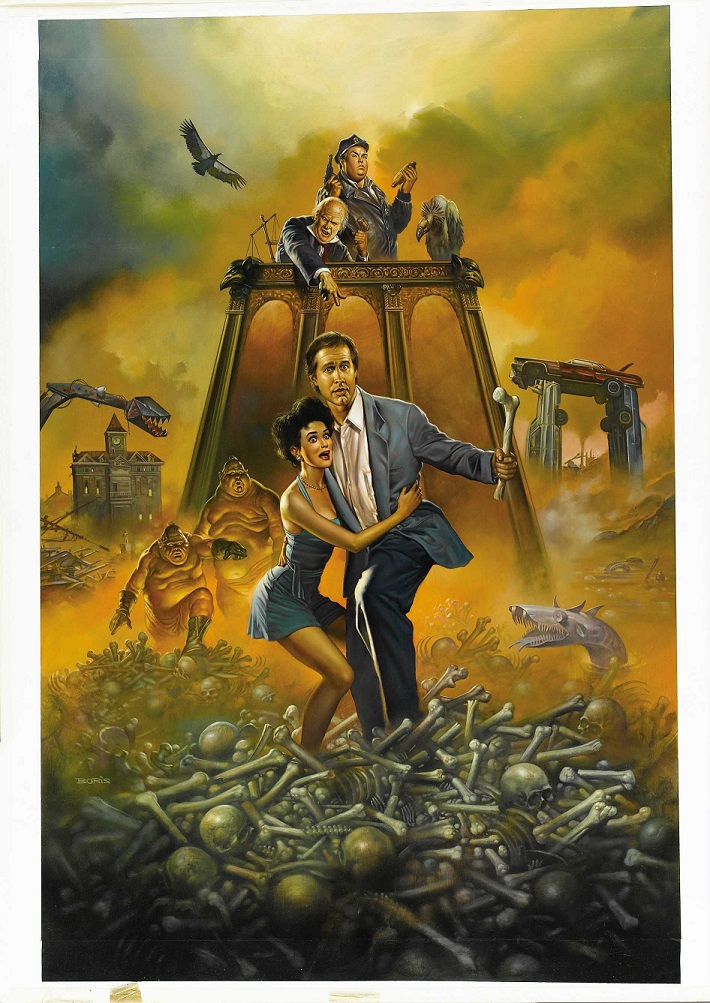 It’s time for a formal reappraisal of NOTHING BUT TROUBLE. People finding it unfunny is understandable; however, if you look at it through the prism of horror, you might just agree with me that it’s one of the seminal entries in that genre from the 1990s. 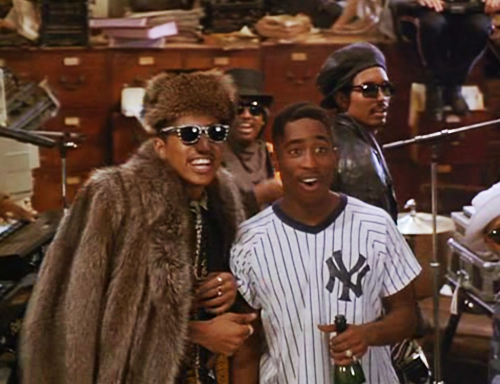