Home  ⁄  The Wire  ⁄  TOAD ROAD COMING TO VOD/DVD FROM ARTSPLOITATION 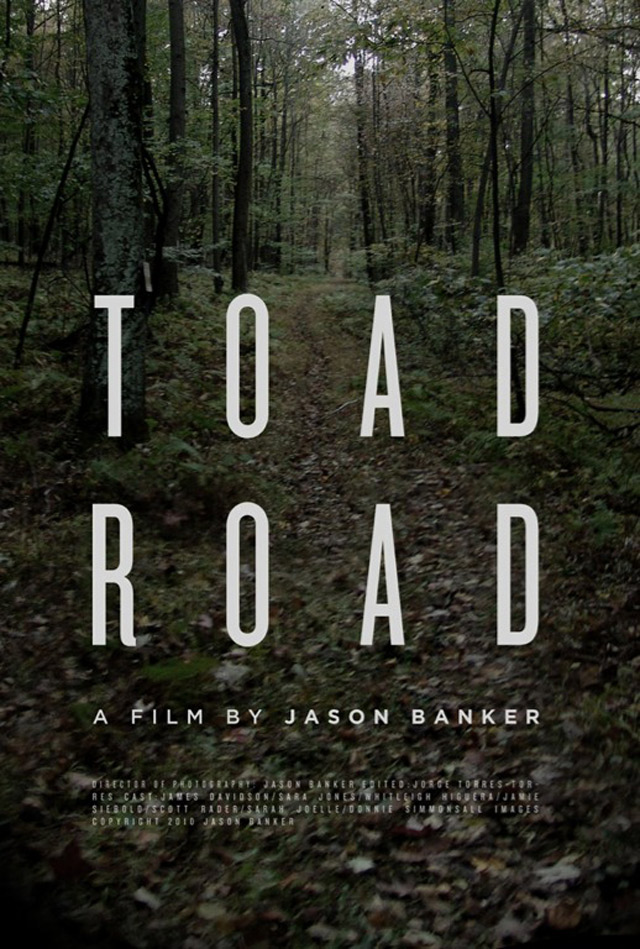 TOAD ROAD WINDS ITS WAY INTO THEATERS THIS FALL

Building on that momentum, Artsploitation Films has announced it will bring Toad Road to theaters this October. Following the film’s theatrical run, the company will release it on DVD and VOD as well as in the digital marketplace.

“There is a nihilism and decay present within the characters of Toad Road that makes the film mesmerizing. The horror comes not from just a mystical location and inevitable conclusion, but a very real, very dark place in each of their hearts. It’s a unique film that must be seen,” says Brian Sokel, vice president of Artsploitation Films. The TOAD ROAD acquisition deal was negotiated by Traction Media on behalf of the filmmakers. Jennifer Arndt-Johns negotiated on behalf of Artsploitation Films.

Wood first saw Toad Road while helping select movies for the Nightmare City horror film festival at The Cinefamily in Los Angeles. He says: “We created our company to explore and expand the definition of the horror genre. Toad Road’s blend of documentary and nightmarish hallucination speaks to this perfectly.  It provides a unique and disturbing portal into self destructive behavior that barrels horrifically out of control. We’re proud to present this extremely powerful and resonant film.”

For the film, Banker used a mix of documentary and narrative form to create this disturbing supernatural portrait of contemporary youth culture and drug use. The story takes place in rural Pennsylvania near the town of York, an infamous area that – according to urban legend – has a trail in the woods containing the seven gates that lead to Hell.

Speaking with Twitchfilm.com, Banker discussed how much of TOAD ROAD was improvised. “I had a backbone of an idea…but other than that, there wasn’t too much that I had planned.  I knew that I wanted to shoot with these kids and get into their life, and let who they were and what they did inform the characters in the film.”

Murray is the co-founder of TLA Entertainment Group and its president/CEO since its inception in 1981. Over the years, the company has operated art house cinemas and later, award-winning video stores in New York City and Philadelphia. Today, the company runs www.tlavideo.com, one of the country’s largest online DVD/VOD sales sites. Murray also founded and continues to be the Artistic Director of Philadelphia QFest and was Artistic Director of the Philadelphia Film Festival (2001-10). In 2000, Murray and partners launched TLA Releasing, a film distribution company that released films in North America. The company expanded its focus with the launch of the genre-focused Danger After Dark label in 2003. In 2004 it opened an office in London and expanded operations in the UK. Prominent releases include Suicide Club, Latter Days, Death of a Dynasty, Another Gay Movie, The Trip, Adam and Steve and Sleeper Cell.

Toad Road is a local urban legend about a path in the woods rumored to contain the 7 gates that lead to hell.  The film follows a group of friends with few inhibitions and no boundaries perilously mixing drug use with self discovery. In Toad Road, verité footage, drug use, drunken pranks, and personal issues comprise a disturbing portrait of contemporary youth culture where the lines between perception and reality are blurred with frightening results.