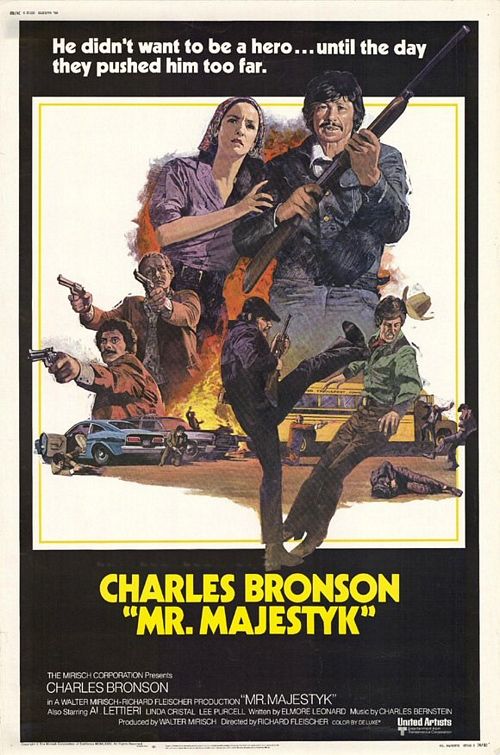 Colorado watermelon farmer Vincent Majestyk (Charles Bronson) is having trouble getting his crop in. Run-ins with a slimy racketeer named Bobby Kopas (Paul Koslo) and the local police are slowing down production. When he butts heads with a mafia hit man (Al Lettieri ), he must add a death threat to his list of problems. Luckily for him, and not so lucky for the opposing forces, Mr. Majestyk is an ex Army Ranger who knows how to handle a gun as well as a plow. 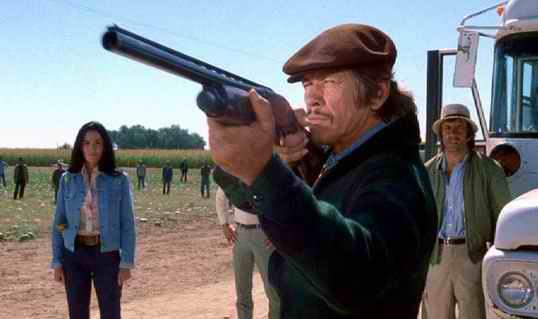 MR. MAJESTYK is my all-time favorite action film. Why, I really can’t say. Maybe it’s because the flick’s truck chase blew me away at a young age after I first caught it on television in the early 80s. Or the factthat  its star is also a favorite of mine. A screenplay penned by the late, great crime novelist Elmore Leonard could be a factor as well. I really don’t think I’ll ever be able to put a finger on the exact reason, what with so many more elaborate action flicks out there to choose from. Perhaps a quick breakdown of its major strengths may help flesh out an answer — 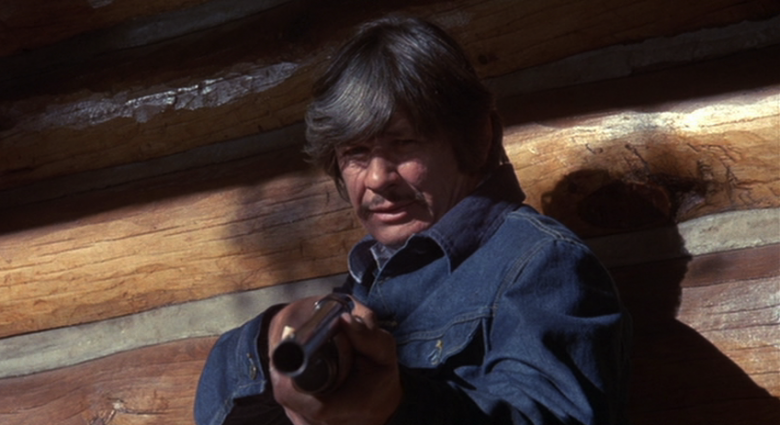 Charles Bronson – He is my favorite action star, period. Clint Eastwood is a very close second, but there’s something about Old Stone Face and his quiet “I’m going to mow you down if you cross me” persona that’s always struck a chord with me. 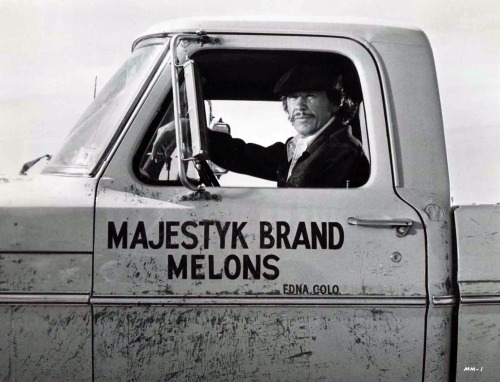 Bronson’s performance in MR. MAJESTYK is one of his best. With Elmore Leonard putting words in his mouth, Charlie gets to pepper his tough guy shtick with some appropriately placed comedic dialogue, producing one cool character. A scene in which he belts Lettieri’s hit man after receiving another of the killer’s death threats is one for the tough guy books —

Al Lettieri – After thuggin’ it up for Al Pacino in THE GODFATHER (1972) and Steve McQueen in THE GETAWAY (1972), this intimidating actor met his perfect film opponent in Bronson. As exemplified in the above scene, the guy is damn scary. But so is Bronson, and when the two cross swords, it’s like watching a pit bull and a gorilla go up against one another. Al’s Frank Renda is one of cinema’s ultimate jerk-off thugs. The guy is a real dick, constantly bullying and bellowing at everyone around him. Lettieri plays him to the hilt, making it hard to imagine the actor as anything but an asshole onscreen or off. Or maybe it was his real life connections to the mob that have me feeling this way…. 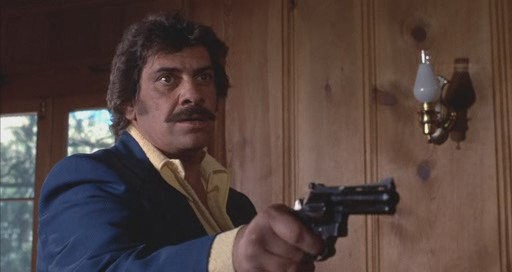 The Action – Director Richard Fleischer stages some great set-pieces. A prison bus breakout performed in broad daylight, a punch-up in a crowded mountain cabin, the aforementioned truck chase and a final backwoods shoot-out are all competently shot and realistically staged. 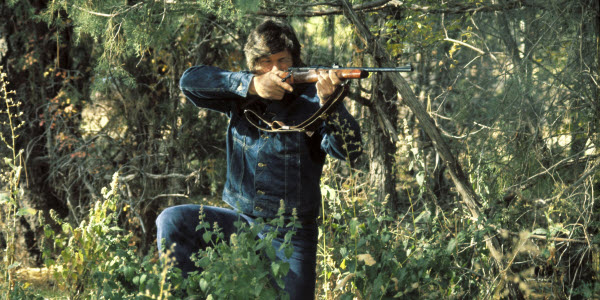 The Ford truck chase in particular is a hoot to watch. The amazing jumps which the vehicle takes over the Colorado countryside were so impressive that Ford re-used some of the footage in one of their commercials! 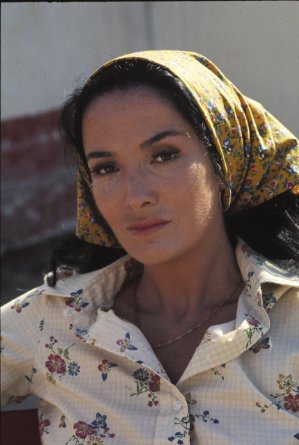 Elmore Leonard’s Script – Originally written as a vehicle for Clint Eastwood, Leonard’s script’s initial intent was to focus more on the plight of immigrant workers. And while that angle is still a small component of the film, we ultimately end up with a typical Leonard stew full of tongue-in-cheek dialogue, brutish criminals, and gritty action scenes. And while a hard look at that social aspect may have produced a richer and more in-depth storyline, as an action fan I’ll take the script as is. Leonard went on to adapt his script into a short novel — well worth a read for fans of his work. 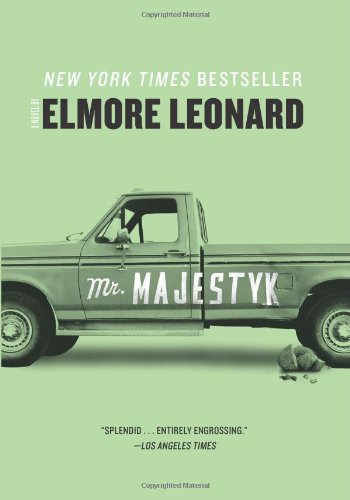 Watermelon Slaughter Scene – I get a little too emotional recapping this scene, so please, just watch the film. 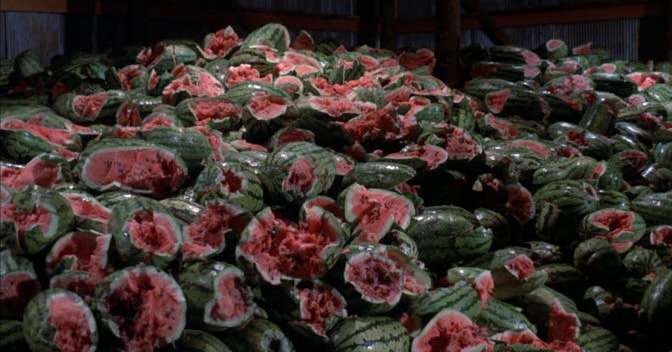 Add Charles Bernstein’s great score, solid support from Paul Koslo and Lee Purcell (she plays Wiley, Renda’s girlfriend) and that classic ’70s gritty feel, and there you have it, a few reasons why I place this at the top of my action movie heap. I’m still not completely convinced I know why I love it so much, but I know I’m not alone — 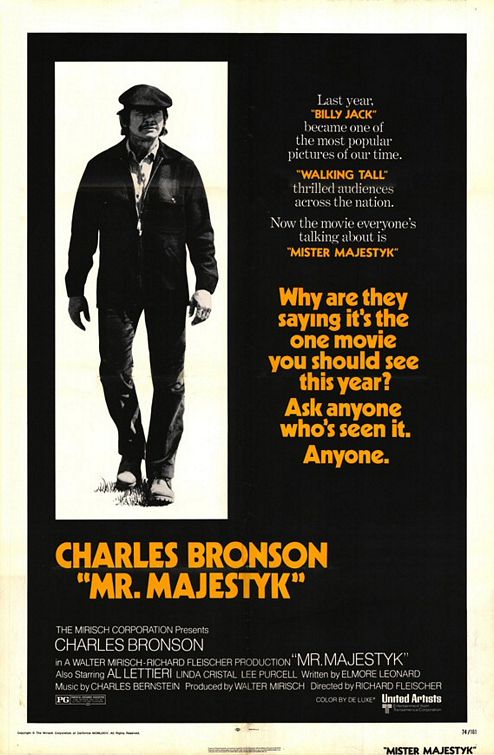