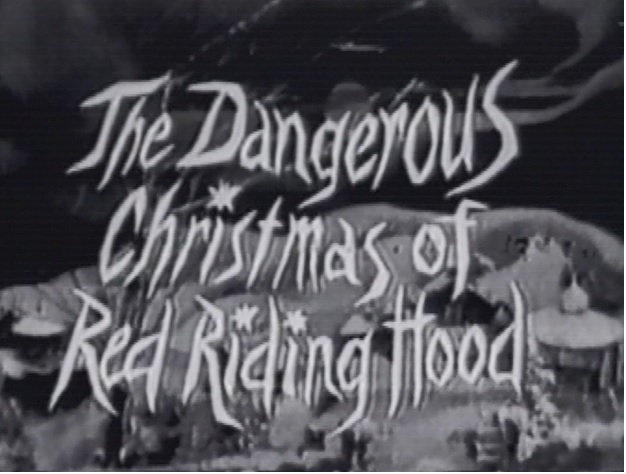 Ah, a Yuletide tale written as a television special in the 1960s, equipped with original songs by Jule Styne and Bob Merrill, probably best known for the smash Broadway show and movie FUNNY GIRL.

Mr. Magoo’s Christmas Carol, you say? Well, yes, but three years after that, Styne and Merrill returned to write the songs for a second holiday TV special, the considerably more obscure The Dangerous Christmas of Red Riding Hood or Oh Wolf, Poor Wolf. (Let’s all save time and call it Dangerous Christmas for short, OK?) 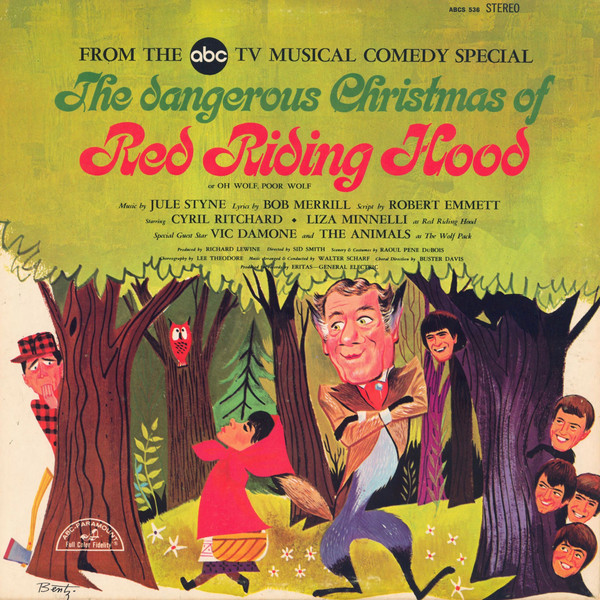 While Mr. Magoo’s Christmas Carol has become somewhat of a classic (honestly, it’s one of the best adaptations of Dickens’ novella, though the greatest to my mind remains 1951’s SCROOGE, with Alistair Sim in the title role), Dangerous Christmas has all but disappeared.

There are a couple of reasons for that, I think. First, it’s … well, it’s not great. But it’s certainly watchable, offering a young (just nineteen years old) Liza Minnelli, fresh off her Tony-winning Broadway debut in Flora the Red Menace, and as the Wolf, an over-the-top Cyril Ritchard, best known for his role as Captain Hook in the Mary Martin Broadway version of Peter Pan. There’s also crooner Vic Damone as a woodsman and the Animals, a rock group popular at the time, as the Wolf’s wolf pack. 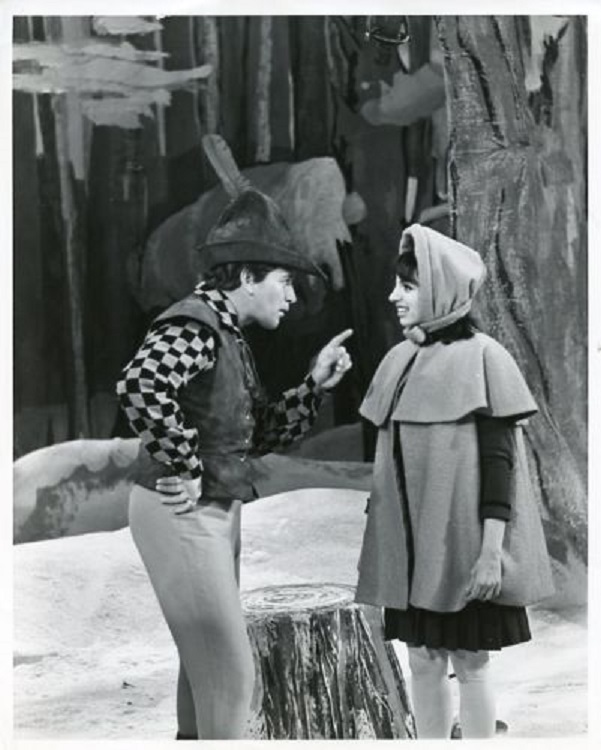 Second, though the special, which apparently aired only once — on ABC in late November 1965 — was a ratings success, it never got broadcast again. Information online is sparse, and I see no indication of why that would be. Certainly, far-worse Christmas specials have remained in rotation for years. (Airing the Rankin-Bass stop-motion special Nestor, the Long-Eared Christmas Donkey should be against the Geneva Conventions, yet it remains available to this day.) And the show was popular enough to merit the release of a soundtrack album, long since out of print. (As far as I can tell, the album has never been reissued, though used copies show up from time to time.)

Furthermore, though the special originally aired in color, that version is long since gone. All that’s been available for decades has been a bleary old B&W video master, uploaded to YouTube (as is the soundtrack album) and for sale on cheaply reproduced DVDs, probably at a dollar store near you. Whether the show is actually in the public domain or if the show’s rights holders just allowed it to languish is a mystery I’ve been unable to resolve. 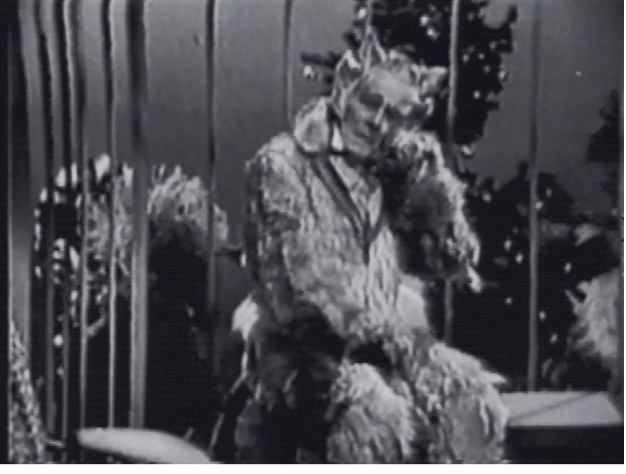 The Wolf may not like his cage, but it would go for at least $4K a month in Manhattan.

The narrative begins with a cold open — the Wolf is in a comfortably appointed cage, bemoaning in song his fate of being alone on Christmas Eve:

Left out of all the merriment

My heart’s not broke but very bent

You know the cost emotionally

Gotta hand it to Bob Merrill — that guy could rhyme.

It’s worth pointing out here that Ritchard plays the Big Bad Wolf exactly the same way he played his celebrated take on Captain Hook: super, super gay. And I mean wildly, extravagantly gay. Which is actually a good thing in the context of this special, because if the Wolf were played with any kind of sexual menace, this would have been creepy as hell.

Anyway, the Wolf is mad because no one’s invited him to any Christmas parties and blames it on prejudice against wolves as well as that “little girl who misunderstood [his] intentions”: Lillian Hood, a.k.a. Red Riding Hood. 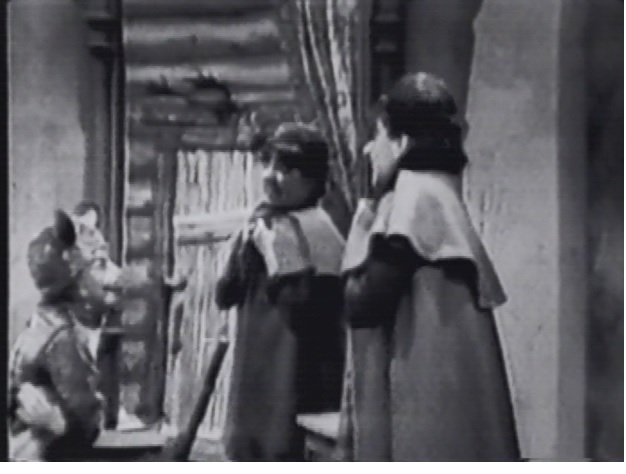 Lillian tries on her new cloak, under the admiring gaze of her friend, a large mouse with whom she apparently communicates telepathically.

We then flash back to the origins of the story. Lillian (Minnelli, nineteen going on thirty) is cooped up in her room, getting ready for a trip to see her Granny and complaining to a mouse friend about not having new clothes — something red would be nice. Her mother, to Lillian’s disappointment, gives her a blue cloak. But — aha! — it has a red lining and she determines to wear it inside out. Lillian sings:

Every plain Jane or plain Lillian

Needs a new frock to look pretty in

Leave it to a frock to give a

(OK, not one of Merrill’s best rhymes.)

Lillian, clad in her new hood-equipped red cloak, begins her journey through a dark, vaguely threatening forest, where she stops to partake in some dancing with the forest animals. 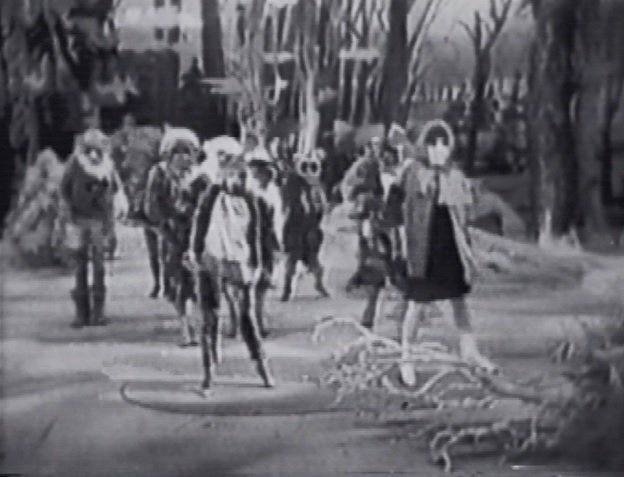 We then see the Wolf, explaining to his pack (the Animals — the British group best remembered for its take on “House of the Rising Sun,” in 1964 — led by Eric Burdon) how he’s going to win over Lillian and become her friend — he’s above thinking of humans as merely food. Oddly, though Ritchard is made up to resemble a wolf, the Animals make do with what appear to be Spock ears. 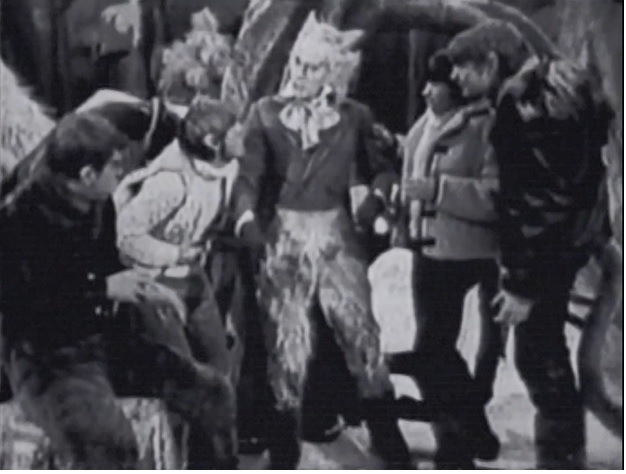 I honestly can’t see these five hanging out together in real life.

After Lillian’s big dance number, the Wolf chats her up, and tries to neg her — someone’s been watching episodes of VH1’s The Pickup Artist! “First you have no presents for me, then you deny me your presence! Get the play on words?” Despite his explanation to the pack, his patter certainly sounds as if he wants to have her for dinner rather than invite her to dinner.

Lillian sees through the ruse and runs off, rebuffing him, and the Wolf accuses her of wolf racism. In a song, the pack encourages him to, um, wolf up and reclaim his heritage. I’d add some of the lyrics here, but they’re mostly indecipherable, though there’s a lot of howling.

The song works, whatever the lyrics, and the Wolf follows Lillian on her way. Lillian encounters a woodsman, played by Vic Damone, eighteen years older than Minnelli. Forget about wolves, Lillian — watch out for creepy older guys who claim to be enchanted princes. They’re usually lying.

Lillian falls for his tale, hook, line, and sinker, even though he’s a complete airhead. (He even declares that he often goes a week without having one clear thought. He takes that as a sign he’s under a spell, but I remain dubious that’s the reason.) Lillian’s romance game isn’t exactly strong either. “Every time you look at your elbows, you’ll think about me!” she exclaims at one point. Even she realizes what a lame pickup line this is.

The woodsman/prince offers to accompany Lillian to Granny’s house, but she turns him down (a mixed blessing, considering the outcome), so he sings her a song instead (see what I mean about mixed blessings?).

Lillian runs off and has a solo ballad expressing her confusion about being naïve and her feelings about the woodsman/prince. The Wolf overhears, disguises himself as yet another enchanted woodsman — a king, though, one-upping that other guy. Lillian is on the verge of falling for his act when he lets out a howl and she realizes her error.

Lillian runs off (again) and the Big Bad Wolf confers with his pack, explaining his plan to beat Lillian to Granny’s house and impersonate the old woman. The pack responds by singing another song with indecipherable lyrics that involve a lot of howling. (Despite the lyrical indecipherability, it’s a fun number.)

The Wolf successfully beats her to the house and dresses up as Granny, who has been stashed in the basement. He tries to get Lillian to say she found him attractive as the faux woodsman, but she responds with vituperative anti-wolf sentiment that seems to seal her fate. 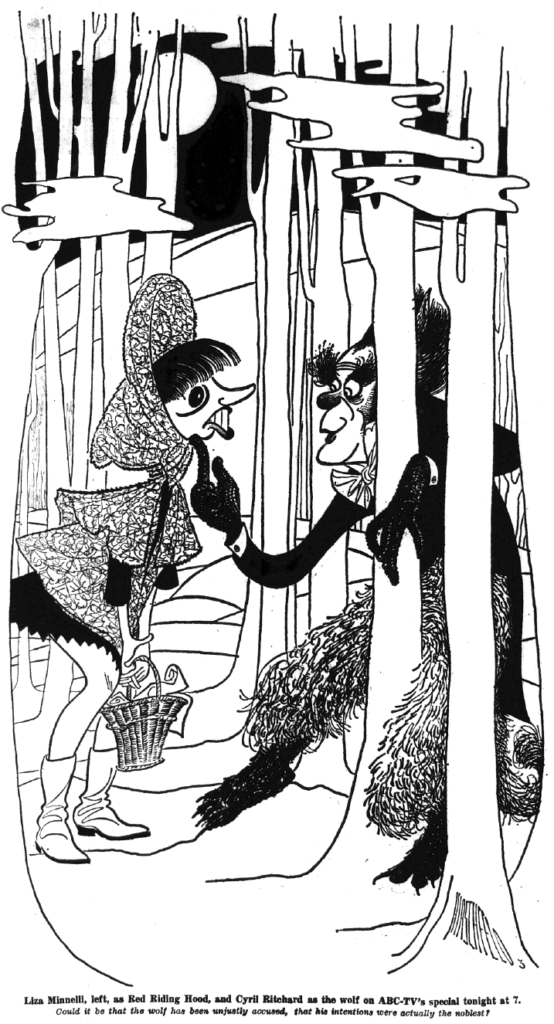 You may have noticed that we’re nearing the end of this tale and Christmas, despite being in the title, has barely reared its cheerful head. If so, you’ll be relieved to hear that Lillian gets a big Christmas number at this point:

It is one of those magical Christmases

In the heart of a child of what Christmas is

My heart is a yuletide bell

When I listen, I hear the knell

Minnelli really sells the hell out of it, but it’s not a Christmas standard in the making. And rhyming “Christmases” with “Christmas is” is cheating, in my book.

We cut to Damone’s woodsman, accosted by a mouse who may or not be the mouse from Lillian’s bedroom. The mouse explains via dance that Lillian is in trouble — and surprisingly, though he is pretty much a himbo, the woodsman gets it.

Back in Granny’s house, Lillian finally realizes that Granny is really the Wolf. (It takes her long enough!) The woodsman makes it in the nick of time, and you think he’s about to rescue her, but, in one of the funnier gags, he instead sings a reprise of his earlier song. The song wears down the Wolf, and he gives up. Furthermore, the song wins over Lillian as well.

We then return to the frame story, with the Wolf in his cage. (Up to this point, I thought he was supposed to be in wolf prison, but apparently that’s wrong. It appears to be simply a cage in some sort of animal housing development, and he can leave anytime he wants.) The prince, he tells us, turned out to be a fraud. Well, not completely — he’s an earl. (Presumably, he still doesn’t have clear thoughts more than once a week.) As for the Wolf, he claims that the incident was “a simple case of intended assault without intent.” (I’m not sure what that means, either. Perhaps the Wolf was represented in his case by Sidney Powell, though as he seems to have escaped imprisonment, that seems unlikely.) 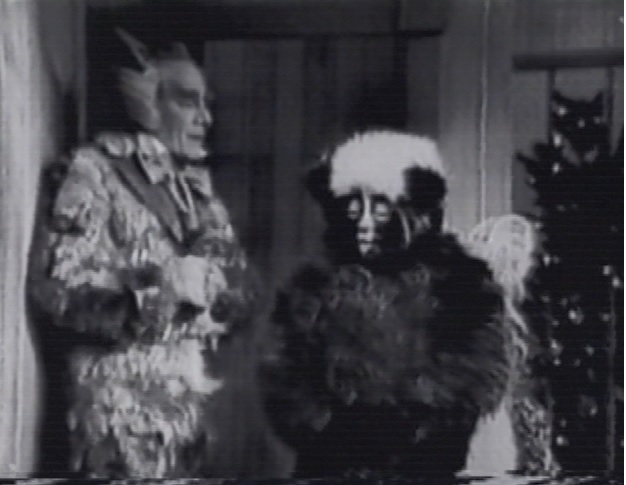 Skunks: better than nothing.

He goes back to complaining that no one invites him to Christmas parties — I take it that this is exactly a year after the main events of the story — when he’s invited by a local skunk family to celebrate Christmas with them. So, a happy ending!

Lillian returns for one last song to send us off:

We wish the world a happy yule

A new year bright and prosperous

From the wee-est little animal

To the ponderous rhinoceros

Go ahead and add anti-rhino sentiment to Lillian’s list of sins. 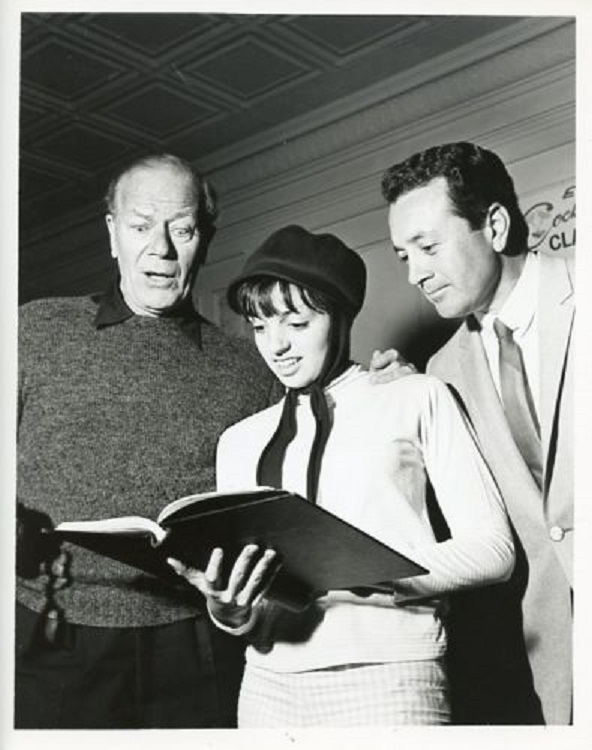 In the end, is Dangerous Christmas worth searching out? Well, it’s not a classic, but there’s enough fun to be had to make it worthwhile having this on in the background when you’re wrapping presents. It’s interesting to see Minnelli so near to the start of her career, and Ritchard is a hammy hoot. The songs are mostly unmemorable, though a couple of them (such as Minnelli’s ballad about feeling naïve) are quite good, and the Animals’ number is spirited fun. And, hey, if you end up liking it a lot, have a theatrical bent, and want to put up your own production next year, the staging rights are still available.