BURIED ALIVE shouldn’t work. Conceptually, it’s remarkably straight forward for a USA World Premiere Movie – first one pair of characters has the advantage in screwing with the lead character, then the lead character turns the tables and gets his revenge, roll credits. There’s not much in the way of twists and turns, shockingly duplicitous reveals or mysteries to be solved, and one of the major horrifying moments in the film is given up right there in the title! We know someone’s going to be buried alive, and who it is isn’t exactly a shocker once the set-up is revealed. 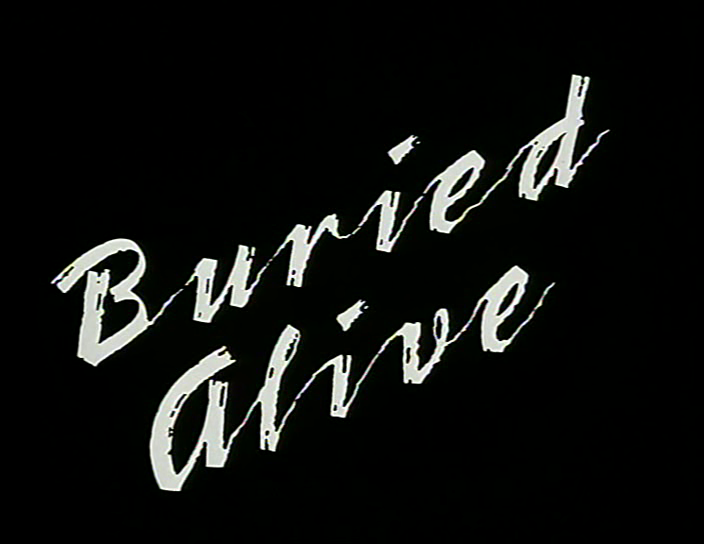 It’s a testament to the direction of Frank Darabont that BURIED ALIVE works as well as it does, and provided the network with one of its highest rated original films. Yes, it’s that Frank Darabont, in the director’s chair for the first time on a feature (though he’d previously made the solid Stephen King-based short film THE WOMAN IN THE ROOM and had worked on the screenplays for A NIGHTMARE ON ELM STREET 3, THE FLY II and THE BLOB) a few years before hitting the big time with his people-trapped-in-a-miserable-situation-trying-to-make-the-best-of-it trilogy of THE SHAWSHANK REDEMPTION, THE GREEN MILE and audiences for THE MAJESTIC.

And it’s easy to see his talent at work, even within the confines of a made-for-cable movie, because even though BURIED ALIVE doesn’t necessarily surprise you with plot twists, it manages to wring the maximum amount of genuine unease out of its claustrophobic moments. BURIED ALIVE also utilizes its actors to such a fine degree that you can’t help but find the final half-hour enthralling even if the film quickly becomes a straightforward revenge tale. 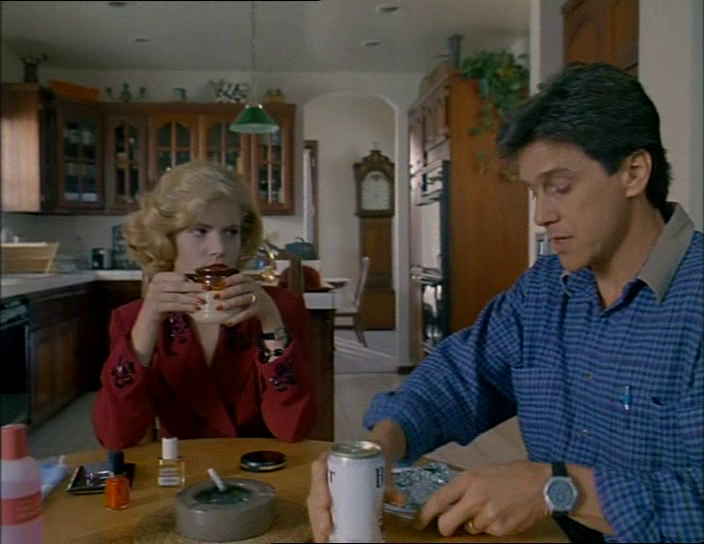 USA Movies are usually notable for their casts, and BURIED ALIVE is no exception, sporting a solid team of cinematic vets in fine form. Tim Matheson stars as Clint, who has moved back to his hometown with his wife Joanna (Jennifer Jason Leigh) in order to run a fairly successful construction company. Clint, however, is blissfully aware this his marriage is a loveless one, as his wife longs to move back to New York City and has been cheating on him with local doctor Cort (William Atherton), and the bad doc has been doing his best to convince Joanna to off her hubby via poisonous fish ovaries so they can collect insurance and sell of the company.

Joanna is reluctant at first, because she’s Jennifer Jason Leigh and she’s got to have some chance to act conflicted, but she gives in (after some sex, wine, and chopping a cucumber in a manner nobody in the history of time has ever chopped a cucumber) and poisons Clint, who is shocked at the sudden turn of events. Cort quickly pronounces him dead of a heart attack and has him buried in a cheap coffin despite some questions by Clint’s best pal and town sheriff (Hoyt Axton!), bypassing an autopsy, because he’s William Atherton and he’s got to have some chance to act ultra-slimy. (How slimy is he? He was an aquarium right above his bed in order to better show off the fish that can be used for poisoning.)  Little do they know that Clint has just been… BURIED ALIVE! Because the movie is titled BURIED ALIVE. 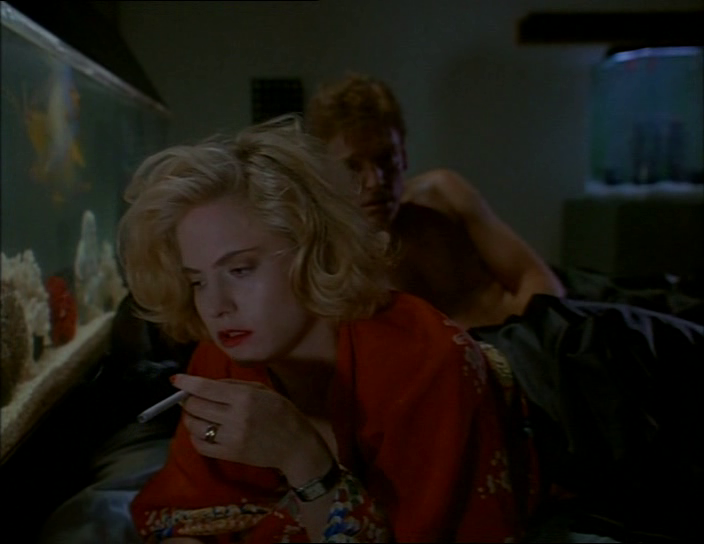 And it ain’t just called BURIED ALIVE for shits and giggles. The sequences with Matheson buried beneath the crypt are genuinely unsettling, with his escape emerging as a made-for-TV version of Beatrix Kiddo’s similar getaway from KILL BILL VOL. 2. It’s no wonder Matheson himself found the process tough, remarking how terrifying it was to film in a recent Shock Cinema interview with Anthony Petkovich.

But Matheson being BURIED ALIVE isn’t really even the highlight of the film. His roaring rampage of revenge is a splendid sight to behold, as he busily sets up a house full of traps and passageways to entwine the two lecherous lovers and torment them psychologically before bringing down the hammer. Admirably, Darabont and writers Mark Patrick Carducci and David A. Davies make the most out of the trickery while still remaining safely in TV-movie territory, maximizing suspense while delivering only scattered violence.  Minor characters aren’t given the short shrift either, with little roles like the town coroner and his teenage assistant and the sheriff’s wife coming off as actual human beings with untold backstories rather than just devices to forward the plot.  Even the poisoning itself is surprisingly tense, as we’re not quite clear as to who has the wine glass of death!  Michael (RUTHLESS PEOPLE) Colombier’s score helps as well, a pleasant blend of good ol’ boy twang that becomes more gothic as the film progresses, complimenting the film’s noir/horror vibe nicely. 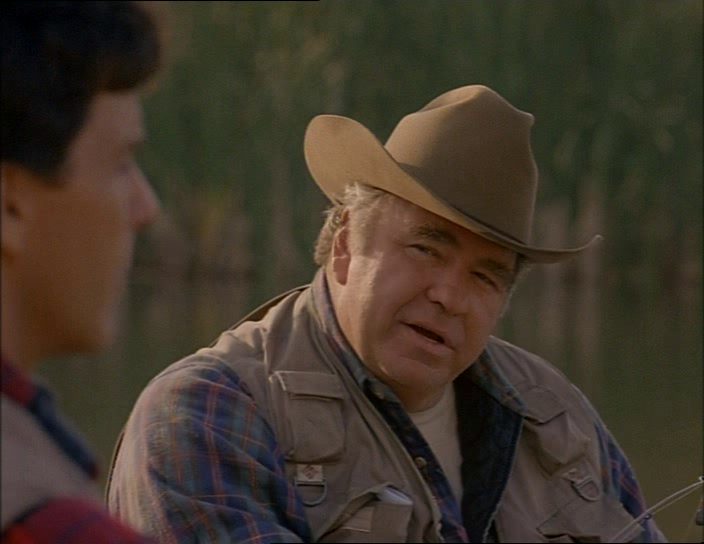 That scattered violence really feels like a release, too, because, you really hate these people! Atherton is, as always, a brilliantly sinister foil, and those who are only aware of him from the likes of REAL GENIUS and GHOSTBUSTERS will enjoy him really cutting loose his sociopathic side here. Leigh’s Joanna is slightly more sympathetic, as she’s a bit under Cort’s thumb at first, but she wavers between indecisive and actively hostile for a while before going full-on psychopath so that you can’t wait for her to get her comeuppance – especially after Clint discovers that she met the doctor when she’d used his services for an abortion, despite their having been trying to conceive for a year and a half!

On top of that, Matheson’s Clint is such a nice guy that you really can’t help but root for him, even if he is a bit oblivious to his wife’s lack of affection. He just wants to live a good family life, hang out with his fishing pal and be generally jovial. And who can blame him? 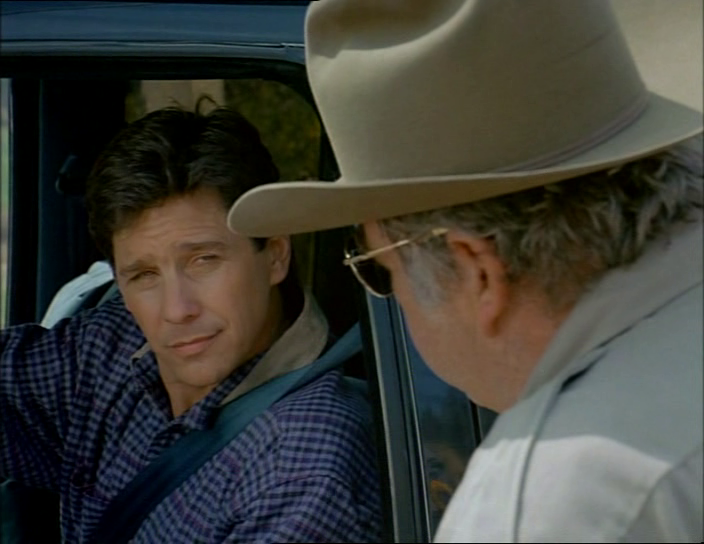 BURIED ALIVE proved to be solid entertainment, as it did well enough on repeated airings and on video to warrant a sequel 7 years later, making it one of only three USA films that were given follow-ups. Matheson not only returned as his role but directed the film as well, this time getting Ally Sheedy through the harrowing ordeal – but we’ll get to that eventually. Promoting the horror angle no doubt helped sales, and it certainly sold the film well, as Darabont’s directorial debut is one of the network’s finest forays into features, even if, on paper, it seems like it would barely have enough plot to fill up a segment in a CREEPSHOW sequel. I’d imagine BURIED ALIVE plays much better on VHS or DVD than with commercials interspersed – with the relatively unusual story arc, breaks in which a network tries to sell you soda, insurance or Dan Cortese shows would probably seem even more obtrusive and jarring than usual. 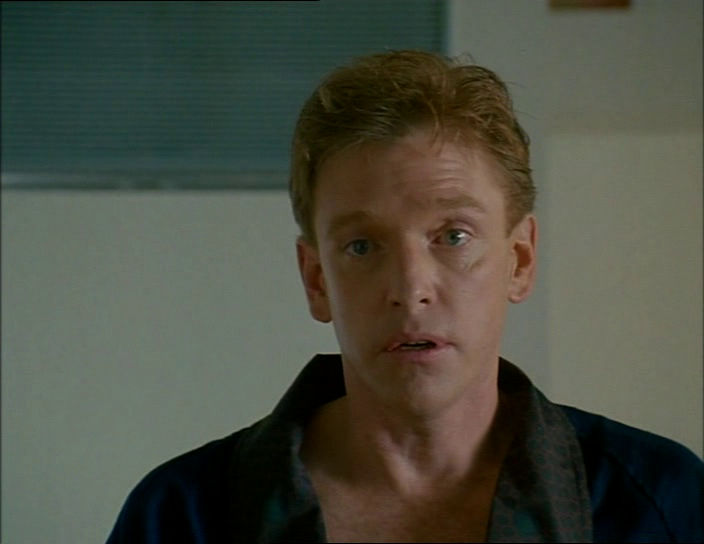