Few filmmakers are as well-represented in Vestron Video’s catalog as Chuck Vincent. The prolific director’s work did appear on other labels, but a disproportionately large amount of his ‘80s films were introduced with one of Vestron’s memorable logos, with HOLLYWOOD HOT TUBS, R.S.V.P.1, PREPPIES, C.O.D., WIMPS, SEX APPEAL, WARRIOR QUEEN, SLAMMER GIRLS, WILDEST DREAMS, YOUNG NURSES IN LOVE and STUDENT AFFAIRS creating a bond between auteur and distributor that few could equal. Chuck Vincent was to Vestron like John Ford was to Fox, which anyone who has seen both THE GRAPES OF WRATH and SLAMMER GIRLS can attest to.

Vincent’s non-hardcore ‘80s output can be boiled down into two categories – the thrillers, such as ENRAPTURE, BEDROOM EYES II and the underrated DERANGED, and comedies, encompassing basically everything else aside for outliers like the adventure pic WARRIOR QUEEN. Virtually all of Vincent’s straight-to-video films were regulars on the cable circuit, with the thrillers staking out their claims on Cinemax’s late-night lineup and the comedies, in a mildly cut form, becoming staples on the likes of USA’s “Up All Night.”

YOUNG NURSES IN LOVE was one of these staples. Shot( from what I can make out from the back pages of Variety) in the beginning of 1987, YOUNG NURSES takes its title from 1982’s YOUNG DOCTORS IN LOVE, Garry Marshall’s satire of hospital soap operas. (Coincidentally, YOUNG DOCTORS was also released on VHS by Vestron.) YOUNG NURSES eschews plot even more than Vincent’s other comedies, dismissing any subtext or character development entirely to present a bawdy bedroom farce, and the inexplicable popularity of hospital-based comedies (GROSS ANATOMY, CRITICAL CONDITION, STITCHES, DISORDERLIES, PARAMEDICS) no doubt made this an easy sell to video stores. 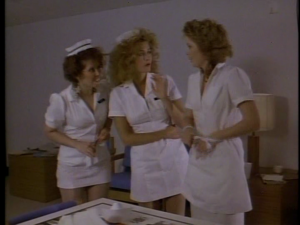 The results are akin to a cinematic version of a Playboy comic strip as depicted by someone who worshipped at the altar of the Marx Brothers and Olsen and Johnson, a low-rent, hospital-set HELLZAPOPPIN’ for the horny late-night viewer. There’s a threadbare plot present – an American scientist is assigned to prevent an undercover Russian spy from getting the sperm of the world’s great thinkers – but most of the running time is used to allow Vincent’s very willing cast of regulars to bounce off of each other with quick-witted responses, goofy voices and the type of bawdy humor that feels almost innocent. 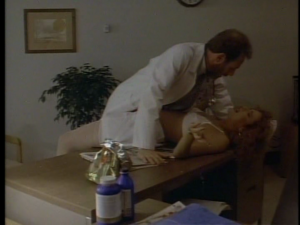 With only a few exceptions, the format is a perfect fit for Vincent and his cast, even if a good portion of the jokes don’t even make sense. Veronica Hart is the stern head nurse, Jennifer Delora is the gold-digging Bunny, Jamie Gillis is the ever-drinking plastic surgeon Dr. Spencer, Beth Broderick gets to use her Russian accent as the Soviet spy’s boss, and Daniel Chapman shows up as a hit man. There’s also a morgue doctor who uses Pepe le Pew as a touchstone for his character, a mob boss who gets a breast implants, and Annie Sprinkle as Twin Falls, whose jokes mostly involve her boobs. Every actor in the film is in on the joke, and provides the scenery chewing needed for the occasion. The exception, oddly, are the leads, who never quite seem either sincere enough to provide a dramatic center or extreme enough to be in on the farce. 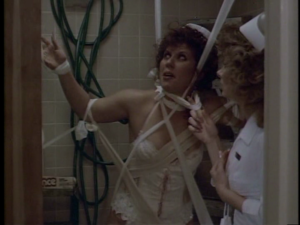 YOUNG NURSES also features some of the most ambitious camerawork I’ve seen in a sex farce, courtesy the underrated Larry Revene. One of the opening shots running nearly a minutes and a half involves over a dozen carefully-placed actors (including one playing two roles) and some truly impressive dollying through the halls and into and out of the rooms of the hospital, utilizing every inch of the space they had to their full potential, and throwing gags out every five seconds or so. It’s a tactic that Vincent and Revene use multiple times during the course of the film’s running time to great effect, and even if the jokes don’t work, the pacing of the film is so quick that you can sit back and just enjoy the ride. 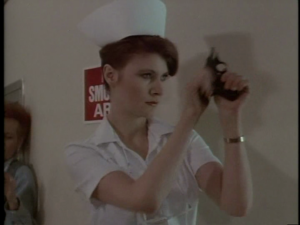 While it’s clear that Vincent enjoyed making most of his comedies, his balls-to-the-wall farces like YOUNG NURSES, SLAMMER GIRLS and STUDENT AFFAIRS may be his most genuinely fun. There’s no depth, and no pretense of being anything other than a goofy sex comedy more focused on innuendo than actual nudity. 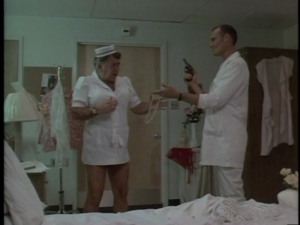 Yep, that’s right – it’s pretty skimpy on the skin itself. While there are flashes of breasts, YOUNG NURSES is bound to disappoint the raincoat crowd. Vincent’s later films seemed much more interested in the idea of sex than sex itself, filled with sordid situations or blushworthy humor while delivering the “goods” only sparingly. (It does, however, feature some welcome beefcake typical of Vincent’s sex comedies.) The low skin quotient in many of his cable staples no doubt contributed to Vincent’s poor reputation in the psychotronic film community, a reputation that he’s still trying to overcome.

YOUNG NURSES IN LOVE is a great example of the type of work that Vincent could do, and the type of genuinely entertaining spectacle that could be hidden beneath a lurid VHS box selling a torrid dale of medical passion. Vestron Video put Chuck Vincent’s low-budget works of auteurship2 on video store shelves across the nation, and teenage late-night viewers were all the better for it.

2 – I’d argue that of all of Vincent’s films as director, WARRIOR QUEEN is the only one that doesn’t really seem like a film made out of Vincent’s head. Some people like it! They’re mostly wrong, but the arm wrestling scene is good.