My childhood was filled with nightmare fuel from every medium imaginable. Shows like ARE YOU AFRAID OF THE DARK? were the talk of the blacktop at recess, each kid trying to convince the others that the episode totally didn’t scare them and they knew for sure that the show was based on true stories. I would spend all of my chore money on R.L. Stine’s Goosebumps books and stay up late trying to find out what horrors Slappy the ventriloquist dummy was inflicting upon some poor kid. Alvin Schwarz’s collection of SCARY STORIES TO TELL IN THE DARK contained some of the most terrifying illustrations (by Stephen Gammell) that a child of the 90’s could find at the school book fair. On my family’s weekly trip to the video store, there was plenty of disturbing-but-funny horror to satisfy both kids and parents. GREMLINS, ARACHNOPHOBIA, TREMORS, POLTERGEIST…all of these films were an integral part of my childhood, and my introduction to the film genre that taught me that the world is a scary place, and that monsters are real and live inside every one of us. I’m grown now, with children of my own, and I lament at the lack of kid-friendly horror available. When my 8-year-old son watched NIGHT OF THE LIVING DEAD and decided he wanted to see more horror movies, I immediately jumped for the quintessential monster flick for every budding horror fan: MONSTER SQUAD

MONSTER SQUAD is a 1987 horror film following a group of young horror fanatics that come into the possession of Van Helsing’s diary (yes, THE Van Helsing), and are thrust into a battle between good and evil. The movie features outsiders, monsters, badass kids, and a litany of curse words that culminate in a memorable creature feature for both the novice and the seasoned genre fan. This film is the best horror film that a kid could watch. The movie has plenty to offer by way of villainy. The classic movie monsters are scary, but not so scary that the kids can’t face them. San Winston helmed a team of special FX artists that successfully reimagined the Universal Monsters that the kids would face in battle: Count Dracula, Wolf Man, The Gill-Man, The Mummy, and Frankenstein’s Creature. Duncan Raeghar gives us a cold-blooded performance as the coolest Count Dracula that has been seen before or since. 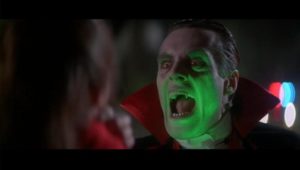 Frankenstein’s Monster is the perfect companion to the kids. They operate their Monster Club from the outskirts of the middle school social realm, largely misunderstood and avoided by their peers. One is bullied mercilessly. So of course they would identify with Frankenstein’s monster, a creature of noble heart, but regarded with fear and suspicion by society. 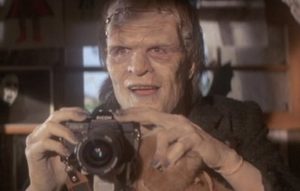 Speaking of outsiders, one of the most endearing aspects of the film is that weirdness is both celebrated and useful. Back in my childhood, straying from the norm was met with suspicion and sneers, and I’m sure it was no different 10 years earlier, in 1987. There is a scene in which the boys are summoned to the principal’s office and lectured on their morbid extracurricular studies. The principal, like most adults in the film, is a lighthearted skeptical contrast to the boys’ grim faith in the monster universe. He tut-tuts and shakes his head, but the boys are unshaken in their faith. Their unapologetic knowledge of horror later helps them battle the monsters effectively. Can you even imagine a straight laced, popular kid trying to deal with just one of Dracula’s bloodthirsty consorts?

It’s no surprise to any DAILY GRINDHOUSE reader that horror pushes buttons and flirts with the taboo, and MONSTER SQUAD is no different. While the movie is not completely clean by modern measures, that’s part of the appeal for young horror fans. The forbidden fruit plucked from the tree in this flick includes all the fun stuff Mom would shake her head at: swearing, sexuality (if your kid didn’t know what a virgin was before, this movie will take care of that for you), and underage drinking and smoking. The most iconic and most quoted line of the film addresses a taboo subject for kids, that of monster genitalia.

Finally, we come to my favorite thing about the film: empowerment. The kids are the real heroes, the MONSTER SQUAD saves the day. The adults are ineffective at best, and outright ignorant at their worst. One of the funniest scenes in the film shows little Eugene hesitant to go to bed, because, he tells his father, “There’s a monster in my closet.” As the father incredulously checks the room, he opens up the closet door without looking in it, sarcastically recoiling in horror from the “big, scary monster” that is actually chilling inside.

Kids are rarely truly listened to and this movie plays on that, allowing the children to be the ones to step up and solve the problem. Eugene writes a letter to the Army calling for help, but by the time the Army arrives with weapons drawn, the battle has been fought and won. The youth have handled the problem themselves, leaving the grownups as inept and confused as ever. The film ends with Sean handing a business card to a confused general and smugly proclaiming, “We’re the Monster Squad.”

When it comes down to it, Monster Squad is the best movie the horror genre can offer to your little monsters that have long outgrown IT’S THE GREAT PUMPKIN, CHARLIE BROWN, but aren’t quite ready to be introduced to Freddy, Jason or Michael yet. That No Man’s Land of morbid fun has only widened since our childhoods, and we just can’t let FIVE NIGHTS AT FREDDY’S fill that void alone. Do your kid a favor and pop MONSTER SQUAD in the DVD player and enjoy the monsters, makeshift weapons, and that sweet, sweet 80’s montage.